I didn’t want to bowl last night. It’s a feeling that I’m sure most bowlers will share once in a while during the league season. In my case, it was because of a sick wife and kid at home that required us to get a babysitter. My team is a five-man rotation in a four-person team league, but two of my players had softball playoff games last night. Without a rainout, I had to bowl, and as of an hour before league, I was still hoping I would be able to stay home. It’s pretty hard to be in your best competitive mindset when you spend part of your day hoping you won’t have to compete!

In addition to bowling and knowing we were short a player because our spare fell through, I walked in to find that we were on the end pair. Unlike the reputation of most end pairs, 65 and 66 has been the highest scoring pair in my league a few times when the year-end analysis is done. I’ve had good nights and bad nights on this pair, with the prime issue coming on 66. That lane tends to be very “pingy,” where misses outside tend to overreact quite a bit, instead of the more typically forgiving reaction from a house shot. Like most things in bowling, who we’re playing and the transition they create define how easy things get. Things didn’t get easy last night.

This was the definition of a mediocre night. My release is feeling better and better, and I have a good chance to start the night with a good tactical choice. Unfortunately, a few spare shooting errors and a bad decision in the third game cost me some pins.

We were bowling another one of those teams that tends to make a mess of the middle of the lane. Because lane 66 tends to be harder the deeper inside you play, I made the choice to stay straighter to start the night. I was confident that the smooth motion from my Stealth combined with playing a bit straighter through the front would keep me out of trouble, and for the most part, it did. I only had one count less than nine in the first 22 frames of the night, but unfortunately, that was a split, and I also missed two of those single pins, but we’ll come back to that.

Throughout those first two games, I was gradually getting my hand more around the ball to get the Stealth through the pins. I didn’t want to take a big step left and join the boomers playing in the middle of the lane, particularly as neither of them had any kind of reaction. The week before, I saw bowlers playing inside with a better look than me, but last night I felt like I was in a much better part of the lane and I wanted to stay outside as long as possible. As the third game started, I felt like I couldn’t do much more with my hand and would need to get into my GB4 Pearl soon. After back-to-back nine-counts to start game three, I decided to make that change. For the first time this year, it didn’t really work.

Despite getting a few good-looking strikes, I struggled with my execution to finish the night. But upon further reflection, I know that the issue was not execution so much as it was a bad ball change. We all make those mistakes, and sometimes we don’t realize it until afterward, which is why it’s so important to do some self-reflection after each outing if you want to learn from the mistakes you made.

There were a lot of positives from last night. My release felt close to 100 percent and I was able to manipulate my hand position effectively. My ability to manipulate ball motion has always been my barometer for how my game is going. For some people, it’s the feeling of their swing or their rhythm. For me, it’s feeling like I can do whatever I want to the bowling ball. It might not be factually true, but if I have that feeling, I can bowl with confidence. Unfortunately, there were a few mistakes as well.

Well, it happened again. This time, it was the fourth frame of game one, and I stood on the approach thinking about my first paragraph of today’s blog. Needless to say, it was my first mistake of the night and a big split. It is certainly a unique distraction for me, and something I’ll need to be aware of. My goal for this is not to pretend that I’ll never think about this blog while bowling again. What I need is a distraction plan, which I wrote about a while ago here. Because this is a distraction that will generally appear in my pre-shot routine or during my approach, it’s simply a matter of committing to stepping back and restarting the pre-shot routine process.

This wasn’t too far from my other big lapse, which happened in game three when my thumb had swelled and I realized I should probably take some tape out. Unfortunately, I realized it while stepping onto the approach and didn’t step back to remove the tape before that shot. It was a bad shot where I got lucky to leave a single-pin spare. Did I change my tape before the spare shot? Nope. Flagged the spare, too. These are mistakes that all bowlers make from time to time, but never make when they’re really locked in mentally. This is a sign that I still need to be sharper and a reminder of how important ball fit is and why adjusting tape is so important.

In game three, I changed to my GB4 Pearl, and this was a bad choice. I struck on five of the nine shots that I took with the ball, which is only slightly below my average for the night. Evaluating whether or not this was a good move is more about looking at my non-strikes. After 22 frames with only shot less than a nine-count, I had three frames of seven or fewer, resulting in one more open and a converted split to save a few pins.

It’s easy to say that I didn’t execute well at the end of the night. And the truth is that I didn’t execute particularly well. That being said, my mediocre shots with the Stealth earlier in the night were all nine-counts. My mediocre shots with the GB4 Pearl were seven-counts or worse. Any kind of multi-pin spare is harder than a single pin. No matter how frustrating it can be to get tapped, it’s definitely easier to convert those spares. I even developed a system for evaluating shotmaking for this purpose. I’m not sure I would have saved the game if I’d changed back to the Stealth after the first six-count, but it’s definitely worth keeping in the memory banks for next time so I don’t change to the GB4 Pearl in the first place.

It was simply a mediocre night. A few poorly-timed mistakes cost me some open frames, and I didn’t have quite enough strikes to make up for it. I was just a bit overconfident and impatient on a night when scores were not high: my 637 was the second-highest score on the pair (after a 645) and it could have been better. I know I gave some pins away this week, and I will be better next week, with a better approach to my blog distraction issue. 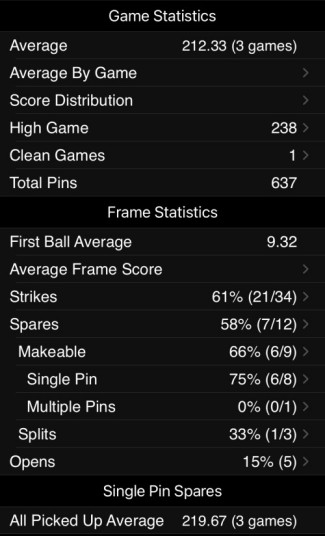