With the new year comes many resolutions, most of which are abandoned within six weeks. The reason for this, in my opinion, is that more often than not a resolution is not treated as a goal; it is usually more of a statement of intent. Unfortunately, intentions don’t always lead to success. For that reason, this month’s article will be devoted to goal setting.

Followers of my blog will know that I’ve written a few short articles about goals. This article will focus on a few of the points I’ve covered previously and then expand on them to help bowlers both set and achieve their goals for 2016.

Look at the goals in the table below. What kind of goals do you tend to gravitate toward?

Outcome goals are like the address you plug into a GPS. They are where you want to go, but without directions there’s no guarantee you’ll get there. Process goals are the directions, but without the address; you just kind of drive around without any particular destination so there’s no guarantee you’ll get where you want to go.

Put another way, outcome goals are motivation. They are the reason you go to the lanes to practice and the inspiration for the hard work you are putting in to get better. At some point you want to stop and say, “I did that.” Everyone who has reached the top of the game has had important milestones like this along the way as they work their way to greatness. The truly great athletes of any sport recognize the milestone and push for another outcome goal.

A warning about outcome goals: they are not always within your control. If your goal is to win a tournament, that’s fine, but sometimes you can bowl great and come up against a bowler that bowls better. Also, they can’t be your focus while you actually compete. How many people have messed up their first 200 game, or a 300 game, because part of the way through the game, their brains suddenly start thinking, “Hey, I can get this score!” And then – bam! – a terrible shot is thrown. Your mind should always be focused on the process when you are training and competing.

The process / performance goals are what you actually practice. This the the sweat you put in to get into better shape to improve the endurance of your legs for longer blocks in competition, the time you spend on the lanes to work on your release, or your swing, or your footwork. Without these type of goals, you are just throwing balls in practice hoping that eventually you’ll end up at your desired outcome.

SMART is an acronym for goal setting, and depending on the setting, the letters can represent different things. If you look it up, you might find something different, but what follows is the best interpretation of being SMART when you combine it with an understanding of uutcome and process goals.

How do you know if you’ve achieved success if there is no way to measure it? Some goals are inherently simple to measure, like averaging 200. You either do, or you don’t. Others are harder, and performance goals are often especially hard. Sometimes, measuring isn’t related to a specific number and it is more about verifying with video. Take a look at your swing using video and if it’s where you want it to be, then it’s mission accomplished.

Another way to say this is “Attainable.” Both mean the same thing, but they don’t necessarily mean what you are probably thinking. If you are averaging 140, the goal to average 200 is probably achievable, just not for a while. The question is, do you have the time to commit to working on your game to improve that much? That’s what determines if it is achievable or not. The same can be said for process goals. If you want a backswing that goes above your head, you need enough flexibility to be able to do that (which not everyone has) and plenty of time to change it if you are starting with a backswing that doesn’t even reach your shoulder. You also need to be willing to go through a pretty big overhaul where your scores potentially suffer. Without these things, it might be time to re-evaluate your goals.

R could also be”Realistic,” but that is too close to Achievable, so I’ve switched my use of this letter to Relevant. The reason here is simple. If you are setting both outcome and process goals, you need to make sure that the process goals are relevant to the outcome you wish to achieve. More importantly, you want to make sure you don’t forget any relevant goals. For example, if your goal is to average 200, then you might want to improve your accuracy, rev rate, and ball speed, because these are all relevant to that outcome. But what about spare shooting? You better make sure to include that. On the other hand, trying to have 100% success on single pins is not relevant to averaging 200. Why? Because not even professional bowlers are perfect on single pins and they average a lot higher than that. Set your goal at 80 to 85% on single pins (which is really what it takes to average 200) and you’ll have a lot more success while building confidence and working toward your desired outcome

To have success, you need a deadline. Sometimes it is obvious, because the end of the season marks the deadline for any average-based goals. However, when it comes to process goals, the learning is often ongoing and it becomes harder to give yourself a time limit. Getting back to spare shooting, if you want to get to 80% success on single pins, you should give yourself a few weeks of practice to get there and keep track. Maybe the deadline is a month from now. Maybe it’s six months. Give yourself a deadline and you’re more likely to make it a priority in your training.

Putting it all together

Brian Tracy said it best: “Goals in writing are dreams with deadlines.”

When considering the types of goals and the SMART process of setting them, it’s easy to see that the goal setting is more involved than simply writing a few sentences in a notebook. It takes some reflection and, more often than not, the help of a coach. It’s not always obvious what you need to work on in order to achieve your goals and self-diagnosis will usually lead to more problems than solutions.

It can help to visualize the goal setting process as a step ladder. Here is an example of how you can setup your goals with more visual impact than a list of bullet points: 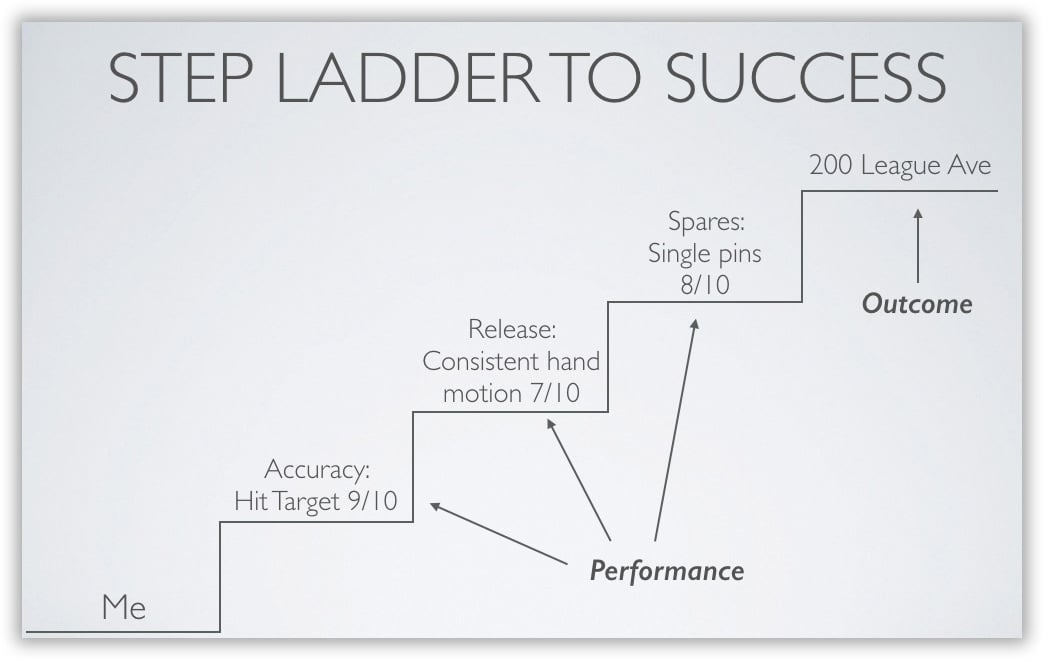 An example of the step ladder goal visualization process.

This lists several possible performance goals on the way to achieving an outcome goal of a 200 average. It’s important to know that, depending what skills you already have, your goals might be different. A more powerful player bowling on easier conditions probably doesn’t need to be as accurate as the first step in the example.

The advantage to visualizing your goals this way is that it also allows space to put in the time-oriented component for every step: 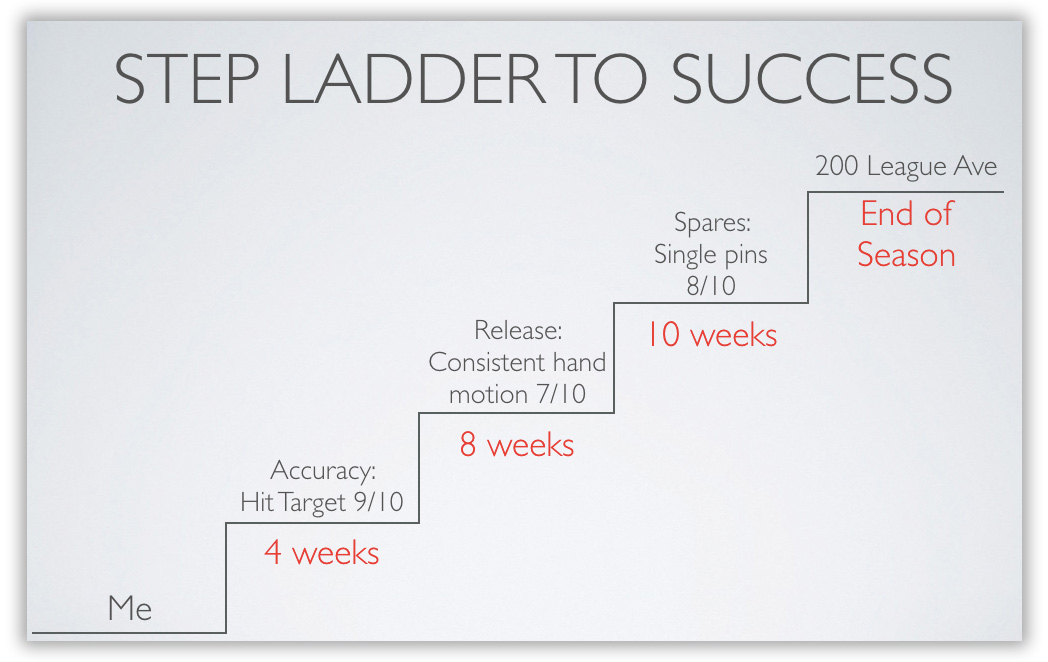 The same goal step ladder shown previously, but with the addition of a timeline.

Of course, there are likely more than three steps between you and your ultimate goal. Depending on how big you make your step ladder and how long-term you are thinking for your goals, you’ll have a mix of outcome and performance goals going up the ladder. The outcome goals would be benchmarks like those discussed earlier, such as a 190 average on the way to averaging 200, or making a cut at a tournament, then making the top 5, then winning. Sometimes they will all happen at once, and other times, you need to take every step.

To finish up the discussion on goal setting, remember that goals can go beyond working on your physical game. In fact, as your outcome goals become more and more difficult, the mental and tactical side of the game becomes more important and your goal setting will need to reflect that. Maybe your goals should be to learn more about ball motion and layouts, or to learn new mental skills. These are at least as important as any goals you set for the physical delivery of the bowling ball.

Once you reach the deadline for a goal, evaluate yourself to see if it is achieved. That could mean checking your spare shooting statistics, doing video analysis, or using tape on the lane to see if your accuracy is where you wanted it. Be creative and make sure that you are really making the effort to see if you’re achieving all the goals you need in order to achieve the big one at the top of your list.

Image Credits: 2016 illustration (©iStock.com/titoOnz) is licensed for use by BTM and is the copyrighted property of its original creator.