Everything was going along just fine until the third game. Back in the day, this was the kind of night when I would have bought a game or two of lineage after the league finished, just to figure out the pair. But we’re getting ahead of ourselves. Let’s set up the night and then go through what happened, though most of the analysis will center around the third game.

We bowled on lanes 59 and 60 last night. Traditionally, 59 hooks a few more boards than 60, but it’s not so different that a bowler generally needs two different balls or two different releases. A few boards of difference with the feet and the eyes and you’re usually good to go. I did expect a bit more transition than I’d seen in recent weeks, as we were bowling with a bowler who loves to cross boards and usually does it with something fairly shiny. This kind of game can create issues for transition because the lane is broken down sideways, rather than vertically from playing straighter up the lanes. So, before practice, I was sure to refresh the surface of my GB4 Pearl and I made a mental note that I might need it sooner than later. I even threw a shot with it in practice, which I almost never do.

It’s worth noting here, because it matters later, that there was also a bowler using a brand new Roto Grip Gem. He didn’t really know what to expect from it, so he started closer to the third arrow in practice before eventually moving farther outside later in the first game. (Note that I refer to these bowlers in this blog as Mr. Hooky and Mr. Gem, but they are friends I’ve known through bowling for many years, so it’s not meant to be disparaging.)

Nothing particularly special happened in this game, but I did have a chance for a big score to start the night. Instead, I left a weak 10 pin on the right lane in the eighth frame and then a pocket 7/10 on a mediocre shot in the tenth. Since both of these happened on the same lane, it was a big red flag. My last strike on the left lane was also a bit weak, so I was starting to see what I’d expected to see, thanks to Mr. Hooky bowling inside of me with a polished ball. Still, it was a good game and I was feeling pretty good, even if my execution wasn’t quite as crisp as the week before.

Here’s where things get interesting. After two more flat hits, I decided to change balls to my GB4 Pearl. Normally, I’d give my Stealth some more time and use my hand to circle it a bit more and open up a little. I didn’t think that would work thanks to the traffic inside of me (who started with the front 10 in the first game). My first shot with the GB4 was terrible—as in, dead tug off my hand, through the face for a Greek church (4/6/7/9/10) terrible.

Maybe I wasn’t as confident in my move as I thought? Did I try to help it because I didn’t think the ball would work? These are the kinds of thoughts that go through your mind when you make an adjustment and throw it badly. It’s partly why it’s so important to at least throw a good shot in these moments. You might be wrong, and you might not strike, but you need to at least be able to learn something and not second-guess yourself.

If I was less confident or in a slump, I might have chickened out and gone back to my Stealth. But I’d been bowling well lately and felt like I was seeing the lane well, so I chalked it up to a bad shot caused by not being fully committed to the adjustment. After that, I re-committed myself and went merrily on my way. With the exception of a stone 7 and a stone 10, I finished with strikes for 222. I felt good going into the last game…

Let’s just go through the shots on the left lane, because honestly, that’s all that matters:

And now the game is pretty much over. Stay clean in the tenth and wrap up the night. Thanks to a triple after my missed spare in the first frame, I ended up with a mostly clean 201, but wow, what just happened? I moved more in the last game on the left lane than I did the entire night on the right lane.

So what happened in game three? If this was a tournament where I was changing lanes every game, I’d chalk it up to a tricky pair and be happy I was off that lane with a 200 game. But this was the third game of league where my game three average for the past three weeks was 273. I wasn’t exactly expecting another huge game, but I certainly didn’t expect to completely lose the left lane.

Here’s what happened: the lanes got a bit cliffed thanks to Mr. Gem tearing a small hole in the middle of the lane in practice and Mr. Hooky playing steep angles through the middle of the lane all night. For the first two games, I had avoided this hook spot thanks to my launch angle, but as the lanes continued to dry out and I chased the pattern a bit left in the first two games, the cliff formed relatively quickly and I brought it into play. I wasn’t aiming too far outside, but I also wasn’t executing my best, so any miss to the outside was suddenly an instant hook.

I recognized it in the fifth frame when I threw a great shot off my hand, exactly where I wanted, and then watched it hook before it could get outside of the second arrow. That’s why I made parallel moves the rest of the night, but I probably should have compensated for the bad 1-and-0 move in the fifth frame by moving 1-and-2 left to bring my angles back in line to how they were before. Another option would be to take my Stealth back out on that lane, because it has a smoother motion and wouldn’t be as responsive to that hook spot as my pearlized GB4 was. Should I have bought a game and practiced to figure it out for sure? Probably. It was just one of those situations where the lanes get a bit funky and I simply ran out of time before nailing the adjustment.

A lot of what happened over the night reminded me a lot of Coach Susie Minshew’s Stuff To Do, No Matter What.

One big bright spot for me came in the second game. The team snuck a few points in the first game and we were in a bunch of tight matches in game two, most of which we were leading, but not comfortably. Then in the seventh frame, our leadoff bowler opened for the second time in a row. And then our second bowler opened. And then our third bowler opened. There was a big energy drop and suddenly things got a bit quiet. It reminded me a lot of the last week when I’d had a negative outburst and affected my team. Except, in this case, I knew I could influence things for the better. It wasn’t about stopping the bleeding on the score sheet so much as trying to re-inject some life into the team.

I got up for the seventh frame, and while I was praying for a strike to help the team, I also reminded myself to make sure that I brought life back to the team regardless of the result. We needed some positive energy more than anything so I was prepared to do something foolish to get a few chuckles and lighten the mood. As it happened, I threw it well and struck, so I gave a bit more celebration than I usually do, and tried to rally the troops for a big finish.

Was it a turning point? Maybe, maybe not. But it was definitely a conscious effort on my part to make sure I gave energy to my team when they needed it. Thankfully, the team didn’t need my energy in the third game when I was struggling on the left lane. They were all bowling well and gave me their positive vibes to stay calm and keep grinding, letting them carry me for a bit while I struggled. It’s how a team should work when it’s functioning well. 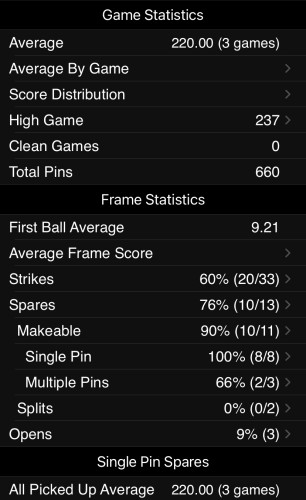