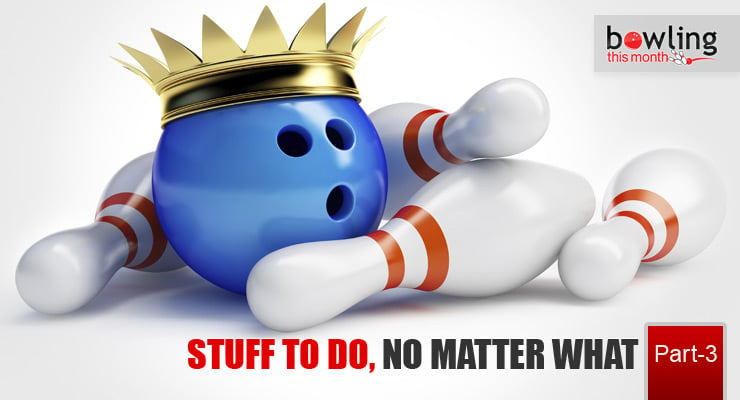 Here are the last few No Matter Whats…at least until I learn some more. “No matter Whats”,—if you’re just tuning in to the series—are what I call universal bowling applications.

This NMW is not about watching the ball roll over your target. This is about that moment when we can’t wait for the outcome, so we just have to peek and see what happened. After all, it’s a results oriented sport. How can we not want to know what happened? This is more of that process vs. outcome stuff. You can’t manipulate the outcome in any other way than through the process. If you want something to change, you’ve got to change something.

Watch the entire path of every ball you roll. Even if it doesn’t go where you intended and especially if it didn’t behave like you thought it would, there is something to learn. A misbehaving ball is a great teacher. It will gladly tell you what not to do, pretty important information. The ball’s transmitter and your receiver need to be on the same frequency.

If you want to know what the lane wants, remember the ball is the paintbrush on the lane’s blank canvas. It has been suggested that we color oil to make seeing it easier. Since we can’t do that, we have to use imagination. Be sure to use blends and lots of colors in your imagination. Here’s a picture of what oil might look like before anyone has bowled on it just to give you an idea. You can do this in your head you know. In fact, it’s a great training tool. Throw your warm up shots and then draw what you think the pattern might be; how much oil is there and where it is?

If you don’t watch the ball’s path on the lane and through the deck, you’re missing valuable information you can’t get anywhere else. The ball will always tell you what you need to know if you’ll just pay attention.

I want to say this one is very important. But then, they’re all important or they wouldn’t be a No Matter What. Without committing, it’s like anything good is an accident and anything else is because you weren’t committed. You’ll never see a pro on television or a really great player look like they threw a shot they didn’t trust. They don’t baby the ball or throw tentatively or throw like they don’t believe in themselves or whatever they have decided. For example, they may pull it or send it wide but they don’t cut off their follow through. If shots don’t work, it will be because their strategy wasn’t quite right or the lane condition fooled them, not because they were not committed to whatever they had decided. That’s a huge difference between them and us.

If I throw like I doubt I can do whatever I’ve decided or like whatever I’ve decided could be wrong and it actually works, I’m in trouble. How can a shot that worked be trouble? Because I didn’t throw that shot with all of me, with pure intent, and if I get a good result I feel like I stole something or got away with something and indeed I did. There is no pride of ownership or satisfaction in the accomplishment. I might pretend to be thrilled but deep down I wonder when the luck will run out.

Although I usually talk about commitment in terms of the follow through, commitment really starts much earlier than that. You have to start commitment with your thought, not your execution. Make whatever decision you want about this next shot, THEN step up on the approach and do it. If you doubt what you decided or you think maybe there is more oil than you figured or it just doesn’t look right from where you’re standing, step back. Don’t throw. Back off. If you throw an uncommitted shot, you’ll get exactly the result you feared. Your doubt makes sure it doesn’t work. What you resist, persists.

Make up your mind about what you want to do. Decide you will do it. That simple. Make a decision based on your vast inventory of information and then commit to do it, No Matter What.

This is a cousin, I think, to the Pay Attention NMW. It’s about having some imagination when you play. Imagine the path you intend the ball to take. Mine personally is purple (!) and two boards wide. (I believe in being forgiven). The real secret to this is the dotted line part. Here’s what I mean.

If you straddle the 20th board near the back of the approach and look only at the 10th board at the arrows (the 2nd arrow), you will feel that the 2nd arrow intersects your body on your clavicle. Yes, I know the line from the 2nd arrow doesn’t really do this. We’re talking here about how it feels, not how it really is. If you look at that same 10th board at the foul line, it will look like it’s a little further out toward your shoulder. If you look at the 10th board beside where you are standing, you’ll see it is either outside your shoulder or right in line with your shoulder, depending on whether or not you are a pulling guard for the Packers.

This is a physical phenomenon called vanishing point; that is, parallel lines appearing to converge. For a bowler this means the farther down lane you look, the more toward the center of your body the target appears. So, if you imagine a ball path that goes through the arrows out to a breakpoint and into the pocket, you will commonly miss that down lane target to the left. If, however, you imagine a shot that goes through the arrows, through the breakpoint, and continues on a straight line through the deck, you are much less likely to miss.

If you have trouble playing a deep inside shot or any shot really, this could help you. Imagine your solid line going through your target area, through the breakpoint, and into the pins or the ditch or the next lane, whatever your angle may be. From the breakpoint to the pins is a dotted line, not a solid line. The lane will take the ball on the dotted line. You don’t have to do that. After all, doing what the lane wants is why you’re playing this line. It’s absolutely one of the best ways I know to stop pulling one and sending the next one out into the weeds.

Dr. Dean says it’s difficult to raise your arm if you think you’re going to get punched in the ribs. That’s exactly what judging will do to you. If you think there is some kind of punishment or price to pay for a shot, you won’t make that shot very well. I don’t mean punishment like jail or the IRS; I mean things like being embarrassed or shown to be wrong (or even human).

It happens to all of us. I remember not too long ago playing on some lanes that changed more quickly than anything I had ever experienced. I left the 4-9 on the right lane. Because I knew they changed quickly and if one changed, the other probably had as well, I moved three left on the left lane. I left the 4-9. I moved 5 and 3 more on the right lane (now 8/3 different than the first 4-9) and guess what? I left the 4-9. My first thought was that all those people were going to think I didn’t know to move

What a shock. (Leaving back-to-back-to-back 4-9s, although not pleasant, wasn’t as much of a shock as my thought.) I surely thought I was past all that stuff. I knew I was moving. They weren’t keeping me warm at night or paying the bills, so what did it matter what they thought? Oh my. Still have some lessons to learn in this incarnation, I guess. Anyway, it was an eye-opener to find that thought in my head. Of course, the issue with any thought is what you do with it. I’m not responsible for what comes into my head but I am very responsible if I choose to keep it. I’m still working on that part.

I survived three 4-9s in a row. Regardless if all those people in scratch league think I can’t move or didn’t move, I’m still an okay person. Important things like the sun coming up and how happy Semi-Precious is to see me when I get home are the same. Those 4-9s were an inconvenience, not a tragedy. Too bad I didn’t have all this wisdom when I shot 129 in Nationals… I used to think I was unworthy. I mean, who would want to bowl with someone who shot 129 at Nationals??? It’s a constant lesson to learn to remember that was my bowling score, not my life score. I am not my number. Okayness is a way of life, a way of thinking of things that observes what happens, not judges outcome.

It’s the same way we treat our doubles partner. You would most likely never talk to your doubles partner the way you talk to yourself. That would show no belief in them, no confidence. You know that if you tell someone they are crummy or worthless or a terrible 10 pin shooter long enough, they begin to believe it. What are you telling yourself?

Regardless of the score or how many 10 pins you flagged or how often you choke one off, you’re still okay. That’s the important message. You get another chance at your next outing to work on whatever you didn’t like. Bring all of you every shot. When you do that, it really doesn’t matter what stands. There’s nothing left on the bench. You brought the best of you and the 9 pin stood. Nice shot. Make your spare. Move on. You’re okay.

I hate for this series to end. I have learned so much from writing it. I hope you have as well.

Image credit: Bowling ball / pins illustration (©iStock.com/3dfoto) is licensed for use by BTM and is the copyrighted property of its original creator.