No, the title of the blog is not a typo. It’s the sixth week of the league, but only the fifth blog post. This is because I don’t bowl every week as part of a five-man rotation in a four-man league. So after a week off spent at home with the family, how did the night go? Very well. But let’s not get ahead of ourselves.

There were a couple of important factors going into this week of bowling:

These two things combined with another variable that I learned during practice: the team’s anchor was being replaced by a sub. The sub is a longtime friend, and solid bowler in his own right, but one with a much lower rev rate than the regular anchor, meaning that there would be one less person in the middle of the lane, and one more person to the outside helping to keep the shot built up. I was basically salivating during practice.

It’s at about this time that the coach in me needs to remind everyone that having high or unrealistic expectations can be horrible for one’s performance. Deciding before you start bowling that your score will be great is a good way to be disappointed and to have a lot of “shoulds” clouding your mind and affecting your execution. It takes you immediately out of the moment to be thinking about your final score. If you can’t bring your focus back to your next shot, things won’t go well.

I did not have any expectations related to my score. What I did have was the knowledge that if I went out and performed well, the ingredients were there for a fair amount of strikes. If I controlled what I could control, made good decisions, and made some good shots, I’d likely have a good night.

Practice showed me that the lanes were hooking a bit more than they had been in the first few weeks of league. This could have been for multiple reasons, including my own fatigue level, but to paraphrase Alfred Lord Tennyson, “Mine is not to question why, mine is but to do.” Seeing what was in front of me, I started with my feet four boards left of what had been my typical starting spot over the past few weeks. This concerned me a little bit, as my experience so far with my Track Stealth has been that getting too deep affects my pin carry. Again, not wanting to get ahead of myself, I just wanted to get lined up and start striking.

The first game went very well. The only blemishes were a weak 10 and a swish 7, both on the right lane. One of those shots was a bit of a miss outside, but if two shots can be the start of a trend, I was wary of what the right lane held for me, particularly after my issues striking on the right lane of a different pair a couple of weeks ago. Given that I wasn’t seeing any differences on the fresh, any new differences could be chalked up to minor differences in how the lanes were transitioning.

Game two has traditionally been my lowest-scoring game. Going back several years, it is almost always my lowest average game over the course of the year. That was true this week again, even though it was still a good score. The strikes continued on the left lane to start game two, while a third flat hit in a row on the right lane marked the end of my night with the Stealth on that lane. The right lane was clearly getting tighter downlane, affecting the smoother motion of the Stealth and causing flat hits. Going to my GB4 Pearl, it wasn’t quite enough and I didn’t want to chase the shot too far outside and ruin my advantage of being inside of almost everyone on the pair. Slowing down helped define the breakpoint a bit more, and the strikes started up again on the right lane for a 237.

Game three started with another string of strikes, interrupted by a stone 10 pin in the eighth frame. Then came the only shot of the night that missed the pocket. I slowed down a bit too much on the right lane and left a 3/6/10. It could have been a bit of a letdown from having the front seven and then missing, or it could have simply been the result of slowing down a bit too much on a lane that was getting drier and drier. Given that it was the end of the night, I didn’t question it too much; I just wanted to refocus on making good shots on the left lane to finish off the 260-game.

One of the key moments of the night came partway through the second game. Still looking for my first strike on the right lane, I was down by about 20 pins. However, I told my teammate that I had my opponent right where I wanted him. I knew I could strike out with one more adjustment, and given any opportunity, I’d win the match. Which I did. Call in mental toughness, call it being in the zone, or having the right mojo. Either way, I think it stems directly from the previous week seeing some success after being patient on the right lane.

I also almost changed balls on the left lane, but decided to stay with the Stealth to collect more information before making a change. Which I never did. In week three, I changed balls a bit too soon, and suffered for it, so that’s another example of learning from a previous week’s experience.

This week, my mental approach, execution, and adjustments were on point in a situation where minimal transition allowed me to score at a high level. It’s exactly the kind of thing that inspired my trinity approach to bowling skill development. When a bowler’s skill sets are working together, in an environment they can take advantage of, the results are generally good. The goal is to increase your skills to the point that they work together on a wide variety of environments.

This is the kind of night that I suggest bowlers replay in their minds and remind themselves of when they are having doubts. The league season is long, and I will certainly have some down weeks where I’ll need to remember this kind of night.

There were a few mediocre shots and some lucky strikes, but I do believe that good luck follows good decisions. Having the right ball in my hand and playing the right part of the lane gave me the right angle to trip out a few 4 pins. All in all, here are the things I want to remind myself of in future weeks, when having doubts about my game:

I highly recommend this kind of process for anyone after a night of bowling where they’ve bowled at or near their potential.

I don’t expect to score like this every night, but I do try to hold myself to a high level of performance. It’s nice to have these nights come together, even if they occur less often than they used to. 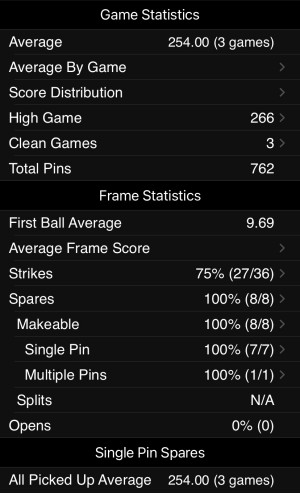