It’s not overstating things to say that last night’s bowling could have been very different from how it turned out. Nor is it false humility to say that I had more than my fair share of good luck last night. Let’s set up the night by looking at what led up to the start of practice.

Over the weekend, I helped my mother move. Lots of lifting and carrying of things left my hands feeling a bit beat up. They weren’t too sore, but they were definitely a bit swollen, and I had to take some tape out of my ball when I put my hand in for the first time when I arrived at the bowling center.

In addition to this, I’d trained at the gym earlier in the day. Over the last few weeks, I’ve been back in the gym and have not been training on Mondays to avoid being too tired or sore on league night. With a few weeks of working out under my belt, I decided to hit the gym yesterday and see what the effects would be on my performance.

During practice, things definitely felt a bit off. My game wasn’t feeling particularly bad, but it definitely wasn’t feeling good either. I couldn’t pinpoint any real cause, but I was definitely a bit more “spinny” with my release. Despite this, it appeared fairly obvious that the left lane was playing tighter than the right lane. My Track Stealth wasn’t quite going through the pins correctly, so toward the end of practice, I hit the ball with my somewhat used 2000 grit Abralon pad in hopes of getting a bit better midlane read.

The start of the night was surprising, to say the least. My first shot on the left lane went through the face. Thinking I’d just grabbed it, I went to the right lane where I was playing two boards inside with my feet. I went high again, which told me that the first shot definitely wasn’t just me. Still thinking I’d grabbed it a little, I moved only one board left and then went through the face again.

By some miracle, I had two strikes and just one split to show for this. I still didn’t know where the extra hook had come from, because even with the extra surface in practice, and any potential transition, I hadn’t seen signs of this kind of over-hooking reaction in my last two shots in practice. Oh well, I thought…just make a bigger move. So I jumped three more boards inside with my feet, continued to play the lanes two boards different, and finished the game clean from then on out.

The night got very strange in the second game. It’s rare for me to be completely unsure of my ball reaction for an entire game, but that’s what happened. Every time my ball went through the pins, I was unsure if I’d strike or not, but somehow I struck more often than not. I really can’t speak more highly of the Stealth, because even though the reaction seemed to be going away, it was still sending the pins sideways into each other. In addition, I was pulling my spare shots, so I barely made a 3/6/10 and a 10 pin in the middle of the game. Between my wonky spare shooting and strike shots that could have gone either way, this could easily have been a 180 game.

By the end of the game, I’d switched into my GB4 Pearl during the fill ball because quite honestly I couldn’t count on my luck to continue and thought I’d better change before the splits and opens started showing up. I probably should have switched to it sooner, but it was a tight match and the Stealth was striking with smoke and mirrors.

Game three was a different story, thanks to the GB4 Pearl. The reaction shape was amazing and I struck on all but one shot when I slowed down too much on the tighter left lane. By the end of the night, I’d ended up only one board left of where I was after the three-board jump in the first game, and I was using a hand position to get around the ball more.

I know this night could have been very different from how it turned out. It’s one of those nights where the performance didn’t match the results, because I only really felt like I bowled well in one game out of three. However, bowling is filled with all kinds of bad breaks, and most of the time, people remember those. In the long run, these even out, so it’s important for bowlers to acknowledge the good luck that benefitted them:

Just counting those frames, that’s six potential opens that I didn’t have, which drastically changed the outlook of the night. So I know I got lucky. And even though I stated last week that I think good luck follows good decisions, I really can’t say that I deserved all the good luck I had last night.

I also got lucky here: 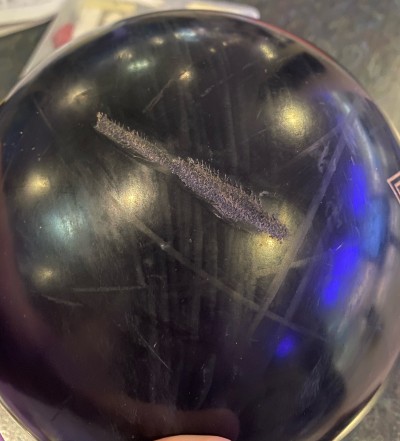 Early in the night, my ball suffered some fairly significant damage, but it didn’t affect my ball roll.

This doesn’t look too lucky, does it? This happened in the third frame of the first game. I went to pick my ball up in the fourth frame and found this fairly substantial belt mark on my ball. It was a good place to put my distraction plan into action:

It’s exactly the kind of reframing action that bowlers can use to take a negative and try to turn it into a positive. Rather than spiral into a negative place with thoughts like, “My brand new ball is destroyed!” I turned it into an expression of good luck. What if the damage had been more in the track? Well, I’d have been happy to change into my GB4 Pearl as a ball that I have a ton of confidence in. As it is, I likely won’t even get the ball repaired because the damage is purely aesthetic.

Overall, the results were good last night. I benefitted once again from bowling against a team with a lot of straighter players, and I had a lot of good breaks. I wouldn’t have been surprised if my score had been 75 to 100 pins lower had I not benefitted from the good breaks I had and their potential impact on my mindset. We all have nights where things don’t feel great and the score reflects that, or nights where the score isn’t as high as we think we deserve. Most bowlers happily forget about the nights where the score is probably a bit better than we deserve. Bowlers should definitely appreciate those rather than take them for granted. 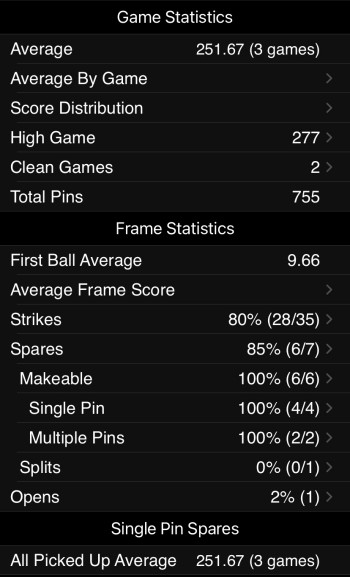