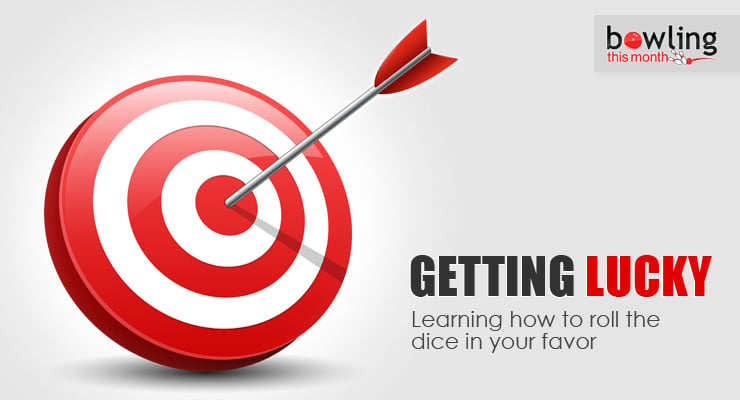 Watching the Bayer Viper Open in Las Vegas (aired on January 22, 2012), Sean Rash put a shot almost right through the nose of the headpin. The result was an almost unmakeable split. No, wait…some of the downed pins rattled and rolled, and tap by tap the pins were erased. The result was a strike (Rash advanced).

If you are Sean’s opponent, it is clearly a “lucky break”, a lucky strike if you want to call it that. If you are Sean, it is an “of course” shot. When you roll the ball greatly and have the mindset of a champion, you expect to carry a few of those. Luck? “Naw, just getting some of the love I deserve sometime.”

“If you make one show, it’s pretty easy to make another one, normally.”
—Sean Rash, PBA champion, on the expectation of positive results

With all of the permutations of all the things that can happen in bowling, players are frequently caught thinking about, and commenting on, good luck, bad luck, and the unfairness of the universe.

Who are the lucky ones?

We have all seen bowlers who seem naturally lucky. They just seem to get the lucky breaks. They carry the odd hits, others bowl their worst games against them, they get to bowl on the better lanes when they are crossing in tournaments, and in general they seem to get more special treatment from the world.

These players seem to have all of the advantages. Maybe they came from a privileged background with all of the best equipment and coaches. Perhaps they get offers from ball manufacturers or commercial sponsors. Sometimes they just appear to have been born with a silver spoon in their mouths.

This month we are going to take a look at luck, lucky people, and whether or not the gods can be beseeched to change their approach to your particular game.

Years ago a researcher named Richard Wiseman ran a fascinating study on “lucky” people. He placed ads in newspapers asking for people who saw themselves as particularly lucky or unlucky to ...

Image credit: Target / arrow illustration (©iStock.com/NB_Factory) is licensed for use by BTM and is the copyrighted property of its original creator.