After a week off to go trick-or-treating with my family, it was back to the lanes for my Monday night league. Walking in to find I was bowling on lanes 55 and 56, I thought back to week 4 of league. I got fooled into thinking the two lanes were the same and then struggled for most of the night to carry on the right lane. This time, I decided that—for better or worse—I’d start with my strategy from last year: 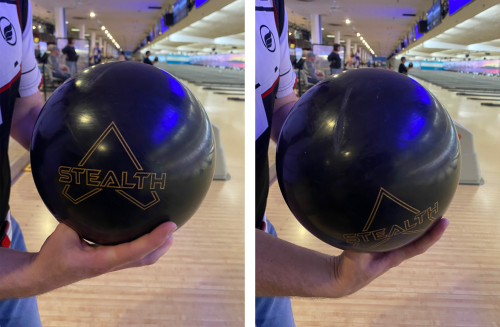 On lane 55 (left image), I flattened out my wrist to use a weaker hand position. On lane 56 (right image), I used a stronger wrist position and put my hand more underneath the ball.

I’m generally a proponent of sharing the weight of the ball in both hands in the stance, to whatever level is comfortable for the bowler. For my game, when I really want to feel like I’m more up the back of the ball, I will put 100 percent of the weight into my right hand. On the other hand, flattening out my wrist a bit, and starting with the hand a bit more on the side will allow me to be nicer at the bottom, lowering the rev rate and increasing my tilt so that I can play straighter through the front.

It’s also worth noting (because we’ll discuss it later) that my thumb hole felt a bit loose during practice. I added a half-piece of tape with a couple of shots to go, and while it didn’t feel perfect, it felt better than having to squeeze the ball to hold onto it.

Overall the night went well. Each game provided some learning moments and some highlights to replay for myself later on. From questioning my tape decision, to making a good adjustment off of a strike, to distracting my teammates with a negative outburst, it was a bit of everything!

Aside from flagging the 10 pin in the first frame, I don’t have a lot to complain about in this game. My tape adjustment toward the end of practice wasn’t quite right and it felt a bit snug. I really felt like I was stuck between sizes, despite only having added a half-piece of tape. My final shot with the tape in the ball came on the left lane, when I gassed it a little and missed the release for a 2 pin. It was my third very mediocre shot in the first six frames, all coming from the ball not feeling right off my hand. By now my thumb had swelled up a bit more, and I felt like taking the tape out would allow me some better feel without needing to squeeze the ball.

I’d been bowling pretty well the last couple of weeks, which has inflated my average a bit, and this wasn’t a great start. Looking up at my score after 6 frames, I had 118 pins and thought, “Oh, I need to strike out for my average.” This is the kind of thought that can derail bowlers, including me. It’s the kind of forward thinking that can bring up anxiety, cause tension in the swing, and be a nuisance. To bring myself back to the present, I thought, “Well, I just took the tape out, and I’ve got a good look on these lanes…just throw one good shot at a time.”

The second game provided an interesting moment. In the second frame, bowling on the right lane, I saw my ball double-hook. This is when the ball starts hooking early, lays off a bit, and then starts to hook again. From a physics point of view, that’s not what happens, but it’s what the ball appears to be doing. It’s not a good motion.

When this happens, I usually just need to move a bit and increase my axis rotation, so I did. And promptly left a big split the next time I was on that lane.

I almost always advocate for blaming the lanes as much as possible, but I grabbed the shot and sent it to the right early, both of which will make the ball check up early and jump high. It wasn’t a surprise that I left a split, and it wasn’t necessarily a result of my adjustment, so I was happy to throw another better shot with this adjustment and see what happened. I struck on my next shot and never ended up having to move on that lane again.

The only thing to discuss in this game was a mental lapse in the seventh frame. I made a mistake that many bowlers can make, which is to throw an “anyways” shot. It’s a term taken from Zen Golf, which BTM reviewed recently, and I suffered the consequences.

Getting set up in my stance, something in my routine didn’t go right. I didn’t feel quite right, and the thought that I should put my ball down and start over flashed in my mind. Did I do that? Nope. Did I throw it badly? Absolutely. The shot never had a chance, and I was mad at myself as soon as the ball left my hand. I recovered and finished with a 276, which made that my only miss of the game. It’s a good lesson that you should always stop and start over if you question yourself at any point between the start of the pre-shot routine and your release.

It was a good night, with lots of opportunities to be proud of how I bowled and a few blips that can be improved the next time around.

I was pretty upset after my mental mistake in the seventh frame of the third game, albeit briefly. However, my negative outburst was enough to impact my team. I’m the anchor of my team. As such, my team’s confidence is definitely reflected in my own confidence, so if I get upset and cause a sort of uncomfortable silence around me, it will cause a dip in the team’s energy. It’s exactly what happened, and none of my teammates struck on their next shots, with two of them missing the pocket completely.

It certainly brings you down to earth when you think that you’ve negatively affected your team, and it’s certainly something to remember the next time I get frustrated for what is ultimately a common mistake. I’m not perfect, and high standards are okay, but perfectionism is not.

What about that tape?

I’m still not sure if I should have added tape at the end of practice. The results of my first six frames (three strikes, two spares, and an open) compared to my last six shots (all strikes) would imply that I would have had a few more strikes without the tape in there. But I also put tape in because I threw a few bad shots in practice without the tape. In retrospect, I should have adjusted the tape before the end of practice. I added it and it didn’t quite feel right, but I thought it was “good enough,” which it clearly wasn’t.

I’m very used to adding and removing tape from my thumbhole, but in this case, I didn’t quite get it right. It’s a key part of feel, and every bowler should be prepared to change their tape regularly, especially if your thumb tends to change sizes.

Last time on this pair, I made a tactical choice and ignored the topography differences that I knew existed between the two lanes. This time, I decided on hand positions regardless of what I saw in the overall friction of the pair, and I simply adjusted my feet and targeting as a result. As I mentioned in my recent article, topography issues can require different adjustments from the typical friction adjustments that a bowler will make. It worked out much better this time, and it felt good to redeem myself on this pair after struggling last time.

This is my third very strong performance in three league nights over the last five weeks. I don’t think I’ve had this kind of consistently high-level performance over a one-month span since I was a much more competitive bowler. I’m both surprised and happy, and it’s worth noting that I’ve made the conscious choice to wear the same shirt each of these three weeks, and will continue to do so. I’m not at the point where I’m eating the same pre-league meal, or not washing my socks, but it might get that way if this hot streak continues. 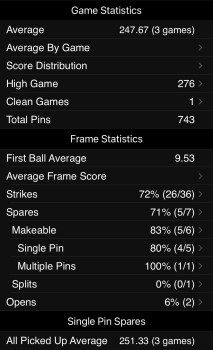