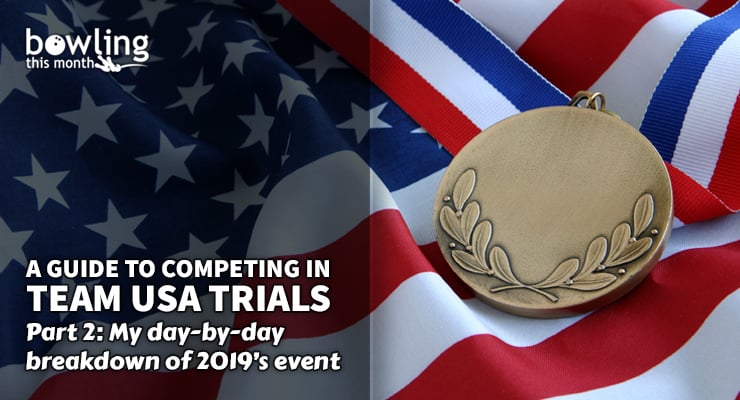 In my last article, I covered some high-level strategies for competing in Team USA Trials. In this second half of the series, I will give a day-by-day breakdown of my 2019 event.

One of the most unique things about Team USA Trials is the format, which includes bowling on a different oil pattern on each of five days of competition. As a participant, you have one practice session to learn about all five patterns that you will be competing on. Bowling on five different oil patterns during the practice session makes it a little more difficult to learn the characteristics of the center. One big reason for this is that you’re focused during practice on simply gathering information on the patterns as quickly as possible. Spending too much time in one place means that you aren’t gathering important information about another pattern. Once you wait too long, you don’t know who was throwing shots on the pair you chose to practice on, what kind of equipment and surface they were using while practicing, or how many shots have actually been thrown on that pair. This is all vital information when preparing for the days ahead.

In the paragraphs below, I will explain the information that I was able to gather during the practice session that aided my decision-making, but I’ll also discuss the characteristics I learned throughout the week and what that meant for each day. You’ll notice that in the first two days, there was more going on than in the final three days. This was due in large part to poor decision-making and not seeing a clear picture until about halfway through the event.

On the first day, the tournament began on the shortest oil pattern we would see all week, at 36 feet in length. Shorter patterns generally tend to play farther right, closer to the gutter. This pattern on this surface was no different.

Based on what I had seen in the practice session, I chose to start the event with the Ebonite Matrix Solid, an asymmetrical ball at a matte surface ...

Josie is currently the Associate Head Coach of the Vanderbilt University's women's bowling team, the 2018 NCAA National Champions. Prior to taking the job as assistant coach nine years ago, she was a student-athlete and two-time NCAA Player of the Year for the Commodores. Josie is currently in her seventh year on Team USA and has two titles on the PWBA Tour.

Image credit: US flag with gold medal image (©iStock.com/spxChrome) is licensed for use by BTM and is the copyrighted property of its original creator.