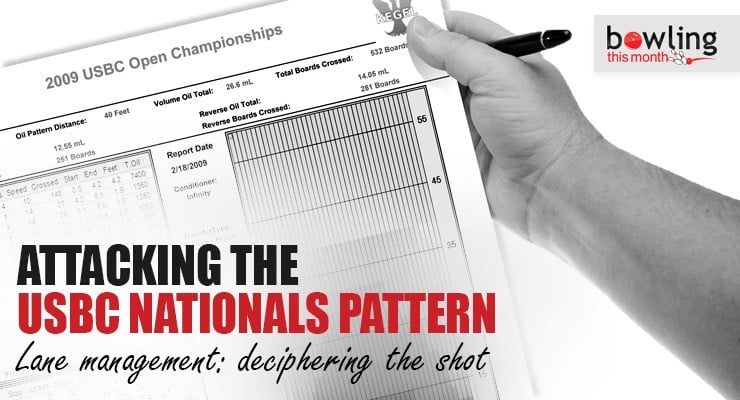 Lane management is a term I began using after the 2003 USBC Open Championships. That year, the tournament went to fresh oil for all team squads, so our Turbo 2-N-1 Grips teams began attacking the pattern in a systematic manner.

Prior to 2003, we always bowled on the second team shift. We did so because we felt it allowed the teams from the first shift to break down the track area, allowing our teams to play inside lines that offered a little swing area to the right and some hold oil to the left.

We all tried to play roughly in the same area, which was just left of where the guys in front of us had played. We would then adjust together as we depleted the oil on the lanes.

Contrary to popular belief, lane management practices are not something that just developed in the era of resin-ball technology. I learned the practice in the 1980s when I joined the well-known Kendor/Faball teams put together by USBC Hall of Famer Rich Wonders. The process of managing the lanes wasn’t as thought out then as it is today, but we worked together to find “the shot,” and we played it together.

Prior to joining that two-team group, 1,780 was my best all-events score in what was then known as the ABC Tournament. The first three years I bowled with that amazing group of champions, I totaled more than 1,900 each time–which made me one of the first players to ever shoot three straight 1,900s in the tournament – and won my first eagle. To put into perspective how much scoring has changed at this event, my current teammate, Mike Shady, has never bowled under 1,900 in 14 ABC/USBC appearances.

The difference between the polyester/urethane-ball era I started in and the modern-ball era is how fast and how much the lane conditions change. Still, in both eras, we sought/seek to play the lanes “correctly.” In the 1980s, that meant playing inside, because there was never an outside shot at the ABC Tournament, which was contested on oil patterns that were every bit as challenging as the Sport Bowling patterns found today. In recent years, conditions have varied enough that an outside shot sometimes can be used, most notably in 2002 in Billings and 2006 in Corpus Christi.

Figuring out where the shot is and what our plan will be starts with the publication of the USBC Open Championships lane pattern on the tournament website. Don’t let anyone tell you that it’s wrong to publish the pattern. Every golf course has a scorecard with the distance and layout of the holes, and that’s essentially what a lane ...

Jeff Richgels is a five-time USBC titleholder and a USBC Hall of Famer. He also owns 28 PBA regional titles and a Regional Players Invitational Championship. He is the only bowler to have 90 clean frames at the USBC Open Championships. Jeff can be found online at www.11thframe.com, where he writes regularly about the sport of bowling.