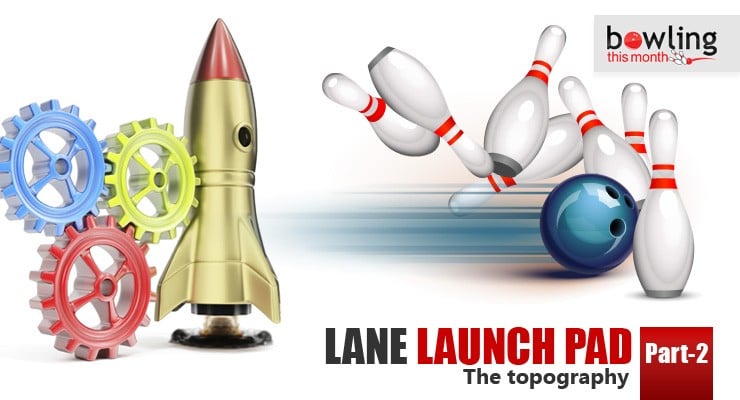 After writing the first part of this series about oil patterns, it is now time to introduce you to the topography or shape of the lane. I will also be discussing some of the myths about oil patterns. Hopefully, this will help many of you understand oil patterns. In particular, I’ll be dispelling one term that fools many bowlers including some professionals. Let’s start by jumping right into the myths of the game.

One of the biggest myths in today’s game is that the oil moves down the lane, known as carrydown. In reality, there is very little oil removed from the front part of the lane and deposited on the back part. The modern bowling ball absorbs oil and takes it off the lane. There are other factors as well to consider.

The modern bowling ball has track flare as you can see in the picture labeled “Oil lines.” Each rotation of the ball on the lane is on a fresh part of the ball surface and there is no oil buildup on that particular part of the ball. This means for each rotation, more oil is being removed from the pattern and the lane rather than being deposited onto the lane.

The amount of oil being deposited on the lane surface or moved down the lane is negligible and certainly not enough to cause the bowling ball to lose its strong reaction on the back end. This can change if all the players on a particular pair don’t wipe the oil off the surface of the ball. If they throw a ball they have not wiped off before the surface of the bowling ball absorbs the oil, that oil will be deposited on the lane. However, the effect of ...