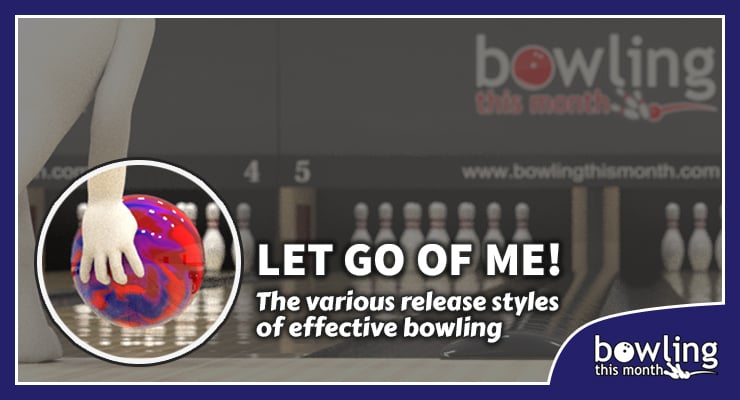 One thing is certain in bowling: in order to knock down pins, you have to let go of the ball. Get it off your hand. Release it. But how? Let’s start with…

In recent years, there has been much discussion, many videos, and a ton of articles concerning the “elite release,” including this great Bowling This Month article by USBC Gold coach Joe Slowinski.

The elite release has some variations, but it typically looks like this: the bowler’s wrist is cupped and the fingers are on the inside hemisphere of the ball; the bowler straightens the wrist at release; and the middle fingers are at the 6 o’clock position as the thumb exits the ball. The image below, a release sequence of PBA star Sean Rash that was borrowed from the above-mentioned Joe Slowinski article, shows how it is done.

The “elite release,” demonstrated by Sean Rash (used originally in Joe Slowinski’s Anatomy of an Elite Release article from the June 2011 issue of Bowling This Month)

If you study slow-motion videos of the elite release, you’ll see that most of the top power players—a group that includes, among others, Wes Malott, Tommy Jones, Mike Fagan, and Sean Rash—release the ball almost identically. There is so much power in this release, you could say that bowlers who employ it torque the ball. (By the way, some people think the elite release is very similar to throwing a Frisbee underhand. They’re right.)

Depending on the bowler, the elite release can be used by high speed, high rev (572 RPM), gutter-to-gutter players like EJ Tackett, or fairly low speed, smaller hook, control players such as Francois Lavoie (who often releases the ball at what I guess is about 325 RPM). Given the number of extremely successful players who use this release, it’s obvious that it is extremely effective.

Lately, we’ve been seeing more and more of one particular variation of the elite release. As the thumb exits the ball, the bowler’s middle fingers (we’re talking about a righthander) rotate clockwise from the 6 o’clock position to about 10 o’clock, with the follow through in front of the bowler’s face—all of which is probably contrary to everything most bowlers over the age of 40 were taught. This variation seems to be practiced a lot by players who are somewhat small in stature (such as Tackett, Lavoie, and 2013 and 2017 USBC Queens Champion Diana Zavjalova, to name a few).

In a previous article, I discussed the fact that there is not one component of bowling that can be considered the be-all-end-all, and that for every successful style there are other styles that can be just as effective. So, too, with the release: one size does not have to fit all. In short, the elite release is not the only release.

So, what other releases are there? Well, how much time do you have?

There was a time when you’d hear a bowler’s style or release referred to—for example—as cranker (as in, “He’s a real cranker.”) or spinner (“She spins it.”) You’d also hear references to strokers, power strokers, rollers, full ...