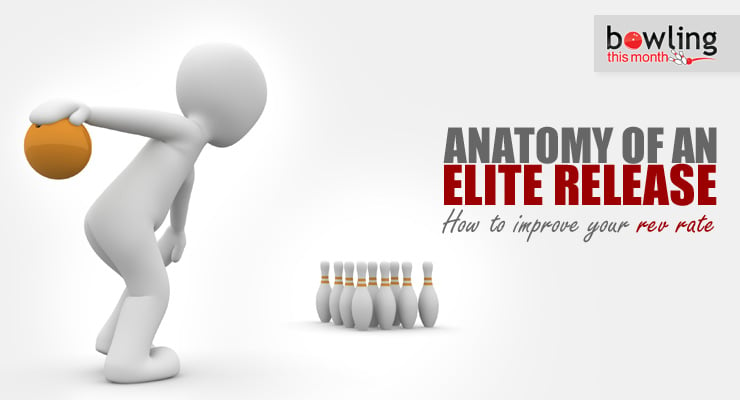 It takes time to master such a release. I often equate an elite release to throwing a curve ball in major league baseball. To achieve optimum motion, the pitcher has to achieve a specific hand position and turn at the appropriate moment. A rotational motion that is too early or too late minimizes movement. Practice and patience is a must for those who want to take their game to the next level by improving their skill in generating a higher rev rate. In our experience here at the Kegel Training Center, it normally takes six to eight weeks for physical game changes to become ingrained.

In this month’s article, I dissect the most important components that contribute to the creation of an elite release. In addition, I provide readers with some practice tips to help develop the established swing, hand placement, and motion that lead to an improved release and a higher rotational velocity.

Components of an elite release

Before discussing strategies on how to develop an improved release, understanding the anatomy of an elite release is critical to establishing the appropriate mental model of how all of the variables coalesce into a great release. To begin, the release is best understood as a function of five major components: the follow through, swing line, wrist position, timing, and fit.

This is achievable only as a function of both the swing line and hand positions, into the release, and through the follow through. How the individual follows through will determine how long the fingers will remain under the ball. Think about the hand staying on the same line as the elbow and on a line toward the focal point. Since the elbow is inside, when the hand follows the elbow, this allows maximum energy transfer into the bowling ball. This almost appears to be a backup ball follow through for many top players (with the exception of the hand rotating counterclockwise).

To best comprehend these factors, let’s begin at the top of the swing. To ensure that the elbow can get inside of the wrist, there has to be adequate space for the downswing. Accordingly, the head should be to the outside, creating tilt, and leading to space for the swing. Moreover, this contributes to the elbow moving to the hip, facilitating the fingers to be in a stronger position. Without adequate space, the swing will likely move around the body, falling outside of the intended elite swing slot which is under the head and close to the body. This downswing is finalized as being close to the foot at release.

As the ball descends in the downswing, the hand will cup and the elbow will bend, leading to the hand scooping under the bowling ball. This scooping motion places the fingers under the ball, creating the longest potential arc line to travel during the release motion. This concept is seen in the downswing sequence of Chris Barnes. This is also where the index finger moves forward and under the bowling ball as seen at the beginning of the Sean Rash release sequence.

Into the release, the fingers should be on the inside of the ball. In the downswing, envision the index finger being directly forward toward the pins. This will place the ring and middle finger in approximately the 7 o’clock and 8 o’clock position (for righthanders) or 5 o’clock and 4 o’clock (for lefthanders). The release sequence illustrates the index finger placement and arc line traveled with the fingers.

The release into the follow through is a combination of turning while extending downward into the lane. For the top players in the world, the arm fully extends as the ball is released in front of the foot onto the ...

Image credit: Bowler / pins illustration (©iStock.com/3DAgentur) is licensed for use by BTM and is the copyrighted property of its original creator.