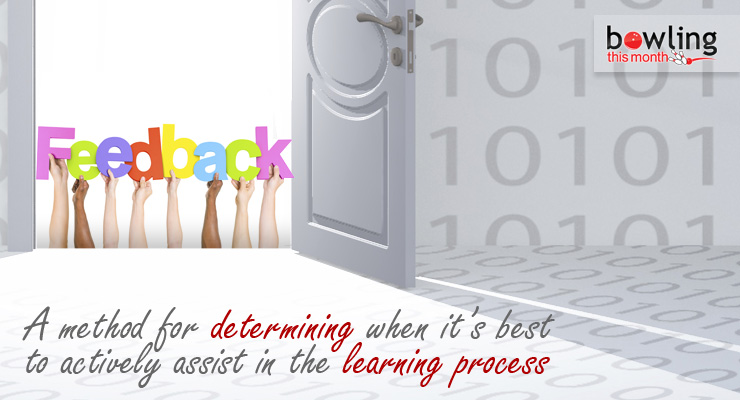 In my last article, I discussed a practical method for coaches to decrease the amount of information they provide during coaching sessions. This method is known as learner-generated feedback. To recap, I urged coaches to consider allowing their students to dictate when they wanted feedback rather than the coach providing constant feedback.

The major benefit of this approach is an improved error detection and correction system due to only asking for feedback on good shots. In fact, in some of the Coaches Concepts articles in BTM in 2012, the expert coaches I interviewed use this technique by providing feedback mainly on good shots rather than all shots. Many of these coaches made statements like, “I try to focus on the good shots to implant a feeling of confidence in the bowler,” “I want to reinforce the correct feel and technique,” and “Increasing the quality and frequency of good shots requires additional information and new techniques, hence more interaction.”

These expert coaches understand motor learning aspects of coaching and that giving feedback on good shots may be more beneficial than giving feedback on most or all shots. In addition, it may allow the learner to become less dependent on feedback and more reliant on their own motor program to execute the delivery. One important key to this that we cannot deduce from these quotes is whether there is an error range in which these coaches do not provided feedback. That is, if the shot is almost perfect or absolutely horrible, do these coaches still provide some feedback?

It is implicit in some of the responses that these coaches do not provide feedback on horrible shots, but it is uncertain whether the coaches provide feedback on almost perfect shots. What actually constitutes a good shot as opposed to a bad shot? Whether execution is good or poor may largely depend on the skill level of the person (among other things).

20% bandwidth error: anything above or below the top or bottom lines requires feedback.

Generally, the more novice the bowler, the larger the error the bowling coach will have to “fix.” The more experienced bowlers will have minor errors to tweak with more critical feedback needed. Initially considering the skill level of the bowler will help the coach determine how to incorporate the feedback style I discuss in this issue.

When providing lessons, I first consider the skill level of the bowler I am coaching and then attempt to determine a range of error whereby I provide feedback. Only when the error is within this range will I provide feedback. This is called bandwidth feedback. When I say bandwidth, I mean a tolerance level to establish when feedback is provided. Coaches may develop a range that establishes performance error limits specifying when they will and will not provide feedback.

When I am working with a bowler, I set a target range for a “good” shot. If the bowler executes the shot well enough, I do not provide feedback to the bowler. Similarly, sometimes a shot is so bad that no feedback is needed.

Take an intermediate bowler, for example, who is learning better timing. We are working on the pushaway. If we want the pushaway to be straight out to a full arm extension before the free armswing takes effect, then something that is close to perfection (e.g., within a 5 percent bandwidth) or something that is totally wrong (e.g., outside a 25 percent bandwidth), does not require feedback.

In this case, if the bowler is near perfect, they will know by the execution of the pushaway and how it feels. By not giving them feedback, they would understand that it is a good shot. If the pushaway is terrible, feedback is not needed because the bowler already knows the shot is bad. Thus, coaches should consider decreasing the amount of feedback by discussing with the bowler difficulties in shot execution when outside the range of acceptable (or good) shotmaking skill. Anything inside the good range of shotmaking means the bowler will know whether it is a good or terrible shot and feedback is not needed unless a common error is being made and needs to be fixed.

Research supports the effectiveness of the bandwidth feedback approach. For example, one research study (Sherwood, 1988) investigated whether groups receiving different amounts of feedback would perform more accurately during a post-test. These groups had different feedback schedules.

One group received feedback on all trials and two other groups received feedback when the error exceeded either five percent or ten percent of the goal movement time (time needed to finalize the movement), respectively. The results of this study indicated that the ten percent bandwidth group resulted in the most accurate performance. That is, the group that received the least feedback performed best of all the groups. This partially supports the fact that too much feedback is a bad thing.

Relating the study to bowling, the group where bandwidth feedback was systematically increased initially was given feedback on all shots, irrespective of performance execution. In later practice shots, the feedback was reduced and provided only when the error was outside a 20 percent tolerance level.

Systematically contracting involved setting a criteria for bowling execution and starting with a large tolerance of 20 percent for error (with less feedback given) in initial shots and decreasing the tolerance level to zero. More feedback was given on all shot attempts in the latter part of the study.

The results indicated that the ten percent error bandwidth and the systematically increasing groups performed the best on a retention test. That is, the groups that received less feedback throughout the entire task or experienced a reduction in feedback improved learning and skill execution.

What to tell bowlers when using this technique

Researchers have found that using the bandwidth approach leads to better learning when the bowler knows in advance that not receiving feedback means the movement is relatively correct. It is important the coach informs the bowler when feedback will be provided.

This is especially true if it is implemented with bowlers the coach is already coaching. If a certain frequency of feedback has been given during previous coaching sessions, an absence of that may be just as bad for learning as too much feedback. That is, if the coach provides feedback on bad shots only and then decides to change to bandwidth feedback without informing the bowler, it may be detrimental to learning and performance.

There are at least two things to tell the bowler when deciding to use this approach. First, inform the bowler when you are going to reduce the bandwidth range. That is, if a novice bowler expects feedback on shots outside a 20 percent bandwidth range and the coach changes the range to 10 percent without telling the bowler, confusion between the bowler’s own error detection and correction system and the coach’s feedback may develop.

Informing the bowler about adjusting the amount of feedback you are giving also allows the bowler to adjust their thinking related to your lessons. That allows them to understand they are closer to accurate execution of the shot when no feedback is provided. Again, not receiving feedback is actually a good thing. Finally, tell the bowler why you are reducing the feedback. It will help them determine errors themselves and better empower them to correct those errors in competition.

Ultimately, deciding on how much bandwidth to include depends on the skill level of the bowler. Normally, coaches should allow a wider bandwidth of skill execution and provide more general feedback for novice bowlers than for more advanced bowlers.

For novice bowlers, feedback should be restricted to one or two major (large muscle) aspects of the approach rather than fine-tuning specific parts. Working on a deep knee bend (large muscle function) with a beginner as opposed to the release (more fine motor movement) in the initial stages of the coaching processes would be most beneficial.

As the bowler’s skill level improves, more specific feedback can be given and the bandwidth narrowed to improve learning, understanding, and problem-solving strategies. Bandwidth feedback allows the coach to provide less feedback and the bowler will derive the same advantages as they do when you reduce feedback frequency.

What to do with the down time

When the bandwidth approach is used, there is more “down time” during the lesson because less feedback is being given. So what should coaches do with the extra time on their hands during the coaching session? Should you, as the coach, break into chit-chat about the bowler’s life, career, or use other friendly banter?

After good shots, where skill execution did not need extensive feedback, questions asked to the bowler about shot execution or other parts of bowling could be included. For example, in some of my bowling sessions, I combine skill execution with reading oil pattern information. I use the bandwidth feedback approach and then, when the bowler is “accurate enough” and does not need feedback, I question the bowler about the oil pattern and lane play. In this way, I am questioning the bowler to consider their shotmaking skills as well as their lane play decision-making.

Bandwidth feedback and questioning is a tool that requires a high level of knowledge in the sport as well as good active listening skills on the part of the coach. Ultimately, in bowling, it is probably a technique that is more beneficial to the intermediate or advanced bowler or skill level, but with creativity could probably be used at all skill levels.

The goal of this technique is to develop a collection of questions that explore skill execution or tactical decision-making needed at the higher levels of competition. Instead of a one-way barrage of instructions from the coach, asking probing questions about understanding the drills being performed or the decisions being trained may help the bowler develop a thorough understanding of what they are learning during the training session.

In the past few Coaches Concepts articles, I have made a case for reducing the amount of information coaches provide to bowlers. Ultimately, the quality rather than quantity of feedback is most important.

Image credit: Doorway / background illustration (©iStock.com/bestdesigns) and feedback / hands graphic (©iStock.com/Rawpixel) are licensed for use by BTM and are the copyrighted property of their original creators.