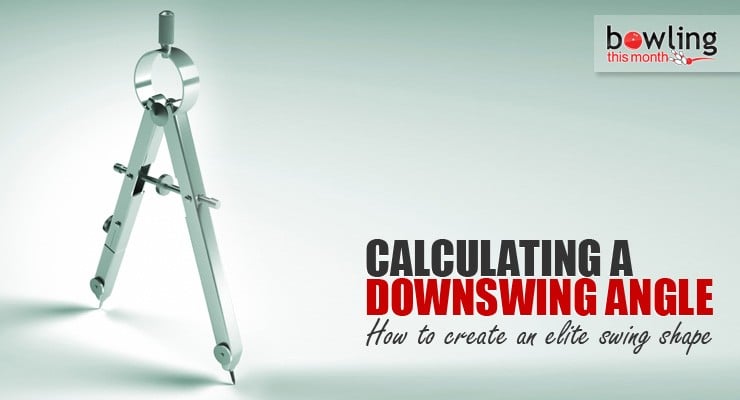 In order to maximize energy transfer to the bowling ball, a bowler must establish a strong hand position into the release. To obtain a great hand position at release, the index finger should be pointing at the pins. This requires the wrist and forearm to be supinated/open.

In this issue of Slowinski at Large, I introduce the concept of the downswing angle and how to measure it for instructional and evaluation purposes. For elite bowlers, the downswing angle is measured from behind as the ball path travels from the top of the swing through the downswing. For the best players, the ball moves inward toward the player’s body and is one of the most important movements of a top notch player. An efficient downswing angle is a result of the movement of the player’s torso, forearm, and wrist. Specifically, a great downswing is a product of lateral spine tilt (lateral flexion) and supination/opening of the forearm and wrist to establish a strong position into the release.

For many amateurs and underperformers, the downswing moves to the outside, rather than to the inside. This movement prohibits good direction toward the intended target line as well as eliminating energy transfer to the bowling ball. Moreover, the outward movement lends itself to an early release with the elbow moving to the outside of the wrist.

During the downswing, the elbow must move to the inside of the wrist. This allows the fingers to maximize the arc line the swing travels as it moves under and around the ball from the start of the release movement until the ball leaves the fingers. This position is directly correlated to a good downswing angle.

From a professional coaching perspective, measuring and evaluating this angle enables precise quantification of the actual downswing movement. Assessment of biomechanical changes during a coaching session or over time after extensive physical game drill implementation can also be achieved. Most importantly, this perspective of the downswing is a reality on video during coaching sessions implemented throughout the ...

A DIY solution for adding versatility to your game

Image credit: Compass image (©iStock.com/Orla) is licensed for use by BTM and is the copyrighted property of its original creator.