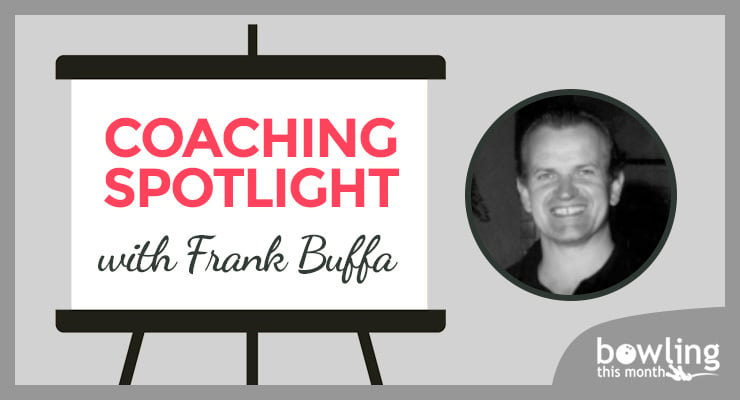 Canada, like the United States, is building its Olympic bowling coaching program. Frank Buffa, the head man at Buffa Distribution, is one of only three coaches in that country to achieve Level Three status, the equivalent of what will become the Gold Level in the United States. Unlike many bowlers and coaches in the U.S., Frank Buffa didn’t begin his rise in Canadian bowling at an early age. In fact, he neither started in Canada nor in bowling.

“I came from Italy to Canada in 1959 to start a new life over here. In Italy we played a sport called bocce. When I came to Canada, I found there was a sport called bowling.” Frank actually found duckpins first, and later in high school, he discovered tenpins. He won championships in both sports, but once he found the game of tenpins, he never returned to the duckies again.

Of course years ago, it was more difficult to make a living in bowling than it is today, so Frank went to college to prepare for his future. Little did he know then that he had chosen the field that would prepare him best to understand bowling in the ’90s. “I have a master’s in physics, and I’ve been teaching physics at a college and university (McGill) for 20 years.”

Soon after he began his teaching career, he sort of backed into the bowling pro shop business also. “Back in 1980, there was nobody in Quebec who could drill a bowling ball. I decided that since I had three or four months off during the year, I’m going to take this one on as a hobby. A lot of friends kept pushing me to do something about it. I went down to Rochester to Bowler’s World, and Mr. Ray Desanto got me into this. I really enjoyed it. It started out just as a hobby. Then all of the sudden, year after year I kept growing and growing. Right now I’m the biggest distributor in Canada and I own five pro shops.”

Frank is not a man who takes his sport lightly. He wanted to become one of the best, so he sought out the best. “I’ve worked with the best coaches in the world—Fred Borden, Don Johnson, John Jowdy, and Dick Ritger. We’ve done lots of clinics together.”

Because of people like Frank Buffa, bowling is perceived differently north of the border. “The reason why this sport in our province of Quebec is growing is because we give them everything. They have all the knowledge that they need. We give them all the coaches that they need in every bowling center that opens up. We make sure that if there’s a pro shop, it’s certified. Right now certification is by our school, but now through IBPSIA, we’re going to have a certification program in August. We have 50 pro shops signed up. So they’ll all be certified by IBPSIA.

“We make sure also that every bowling center has at least eight instructors per center. It’s critical that when a new bowler walks into a bowling center that there’s somebody there who can teach for two or three minutes. That’s all it takes, just the basics of the game. They’ll enjoy the game much more and practice. It’s very, very critical in our industry that every center has coaches.” Are you listening BPAA? Quebec centers provide a service to their new customers to help them enjoy the sport more—and bowling is growing in Quebec.

Because of the newness of tenpin bowling in Quebec, it is actually a craze, a fad at the present time. Proprietors, suppliers, and coaches are trying to capitalize on this influx of business by turning these curiosity seekers into bowlers. “It’s amazing. Everybody wants to bowl tenpin bowling right now. You go into any center in the province of Quebec, and it’s a beautiful center. It’s clean. We have synthetic lanes, and the latest oiling machines. It’s a pleasure to bowl. You don’t go into a center that’s dark and dirty. It’s like a McDonalds. That’s what we want. We want to change the image of bowling and I think we’re doing the right thing in Quebec.” Are you listening U.S. proprietors? The bowling proprietors in Quebec are providing a clean, pleasant environment for their customers, a place that they want to come back to and bring their families—and bowling is growing in Quebec.

Of course, Quebec is not the United States so bowling is probably cheaper there. True, but not that much cheaper. According to Frank, the average cost of a game is about $3.00 Canadian ($2.10 to $2.20 per game American).

Frank is an excellent bowler. In fact, while attending the IBPSIA Certification conference in July, he took time off to run over and make the finals of the Sam’s Town Mini Eliminator. Still, his love is providing service to the industry. As a Level Three coach, he is actively involved in the coaching program—helping to develop the Level Three criteria and working to ensure that the coaches in the centers become certified themselves.

“They go through the program. Most of them are Level One. Those who want to continue move up to Level Two.” In the near future, the latter will be able to move up again as the completed Level Three program will be available to Level Two coaches throughout Canada.

Even though Frank has his careers, he also coaches. His philosophies are much like those of some of his mentors from his earlier days as a bowler.

“Like any good coach, I don’t want to change the person. I don’t want them to bowl like anybody else. I want them to enjoy the sport. I find that the most important thing is, if somebody’s got good footwork, a good approach, a free armswing, those are the key things to a good game. If they don’t, we teach them that. If you’re a good coach, it doesn’t take too long to get them to feel. The key thing is feeling the right move.”

Although very little is written about “feel” in bowling, most of the great players do bowl by feel. This is the element that allows for the last second or “foul line” correction.

Frank is not only a proponent of a solid fundamental game, he also, as a pro shop operator, understands the importance that equipment plays in the game today. “The two go hand-in-hand. You can put the right bowling ball in somebody’s hand and they can see the results right away. If you put the wrong bowling ball in somebody’s hand, even if it’s drilled properly, it could be disastrous.”

Of course, if you walk into Buffa Inc. wanting to schedule a lesson, Frank might be busy or out of town. In his five shops, that is not a problem. All of his pro shop employees are certified both as technicians and as coaches. “We have to take our level of credibility in bowling to the highest level. I believe that everyone who is working for you should have the same goal. They must love bowling. If they don’t love bowling, I wouldn’t want them to work for me.”

Do they give free lessons? “We might have certain nights where there might be two hours of free bowling instruction for anybody who wants to join a league. This summer, my four shops in my bowling centers invite all the people who don’t bowl in leagues on Thursday night to bowl for 2-3 hours. We charge them $10. It’s important that we charge them something so they don’t get something for free and feel that it’s cheap. If you charge them something, the bowling and the instruction means something to them. We get some very, very good results. These people do join leagues because that’s the reason they come out. That’s the reason we give them instructions too.”

Frank believes that proper instruction at the point when a new bowler first walks into your door is a key to increasing the interest of that new bowler and therefore increasing business. It is a concept that when put into practice is yielding impressive results.

Frank Buffa is a coach who practices what he preaches. He is a leader in the certification movement in the sport for both coaches and pro shops and he shows his support for those programs by ensuring that all of his staff are qualified in both areas of the sport.

“I think we need to get as many certified coaches as we can, not just in Canada, but in the U.S. I think it’s important that we work together. The programs should go hand-in-hand actually. We both live in North America so why not share our experiences.”

Although most of BTM’s readers may not be familiar with Frank Buffa, he is legendary in the Province of Quebec. He is part of the new breed of coaches who are emerging, thanks to the work of Bill Taylor, Dick Ritger, Tom Kouros, USA Bowling, and others who have elevated coaching to the professional ranks. BTM urges all serious bowlers to seek out qualified coaching, such as Frank Buffa and his staff in Quebec, or other certified coaches throughout the rest of Canada and the U.S. Competent coaching is the backbone of any sport.