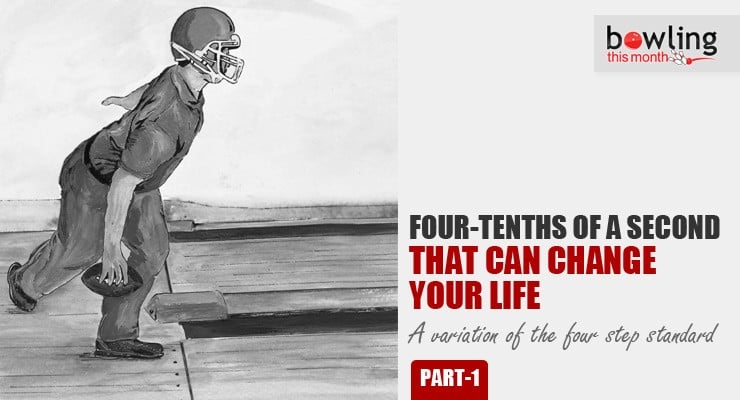 I know what you are thinking already just from reading the title. FOUR-TENTHS OF A SECOND! Ron Clifton has absolutely lost his mind. There is no way I can repeat shots well enough to adjust my game by less than a second. Before you pick up the phone and call the guys in the white coats, hear me out.

As a bowler you already live in a world of tenths of a second; you just don’t realize it. It takes most bowlers less than 1.6 seconds to throw a bowling ball from the time it is first moved until the release. If we measure the amount of time it takes the ball to move from the top of your backswing to the release, we’re looking at a range between four- and six-TENTHS of a second. Four-tenths of a second is actually a long time in our world.

The word “timing” has been associated with bowling for as long as…well, I have no idea; maybe from the days of wood bowling balls. We have been taught that bowling is based on a four-step delivery. Let’s call this the “four-step standard.”

In the four-step standard, the ball is pushed away in the stance simultaneously with the first step. That, in turn, will place the ball halfway to the top of the backswing when the second step lands. The third step will correspond to the ball reaching the top of the backswing. The fourth step goes into the slide and the foot and ball arrive at the foul line at the same time. A bowler using this technique would be said to be “in time.”

Most bowlers could do this type of timing routine, but not all. You see, we are not all proportioned the same. Some of us have long legs in relation to arm length. Some have long arms in relation to leg length.

Most of my height, for example, is in my legs. By comparison to someone else who has the same leg length, I have short arms. Having short arms can cause me to have a short “swing cycle” (more on swing cycles later) compared to the natural gait of my feet.

I discovered the arm to leg length discrepancies due to my own struggles with timing many years ago. Coach Bill Taylor brought it to the world’s attention as he wrote about it long before I did.

Bill Taylor actually went around measuring people’s arms and legs, trying to assign a mathematical formula for use in correcting timing issues based on the length of body parts. There are many other factors that are just as important that need to be taken into account when adjusting timing.