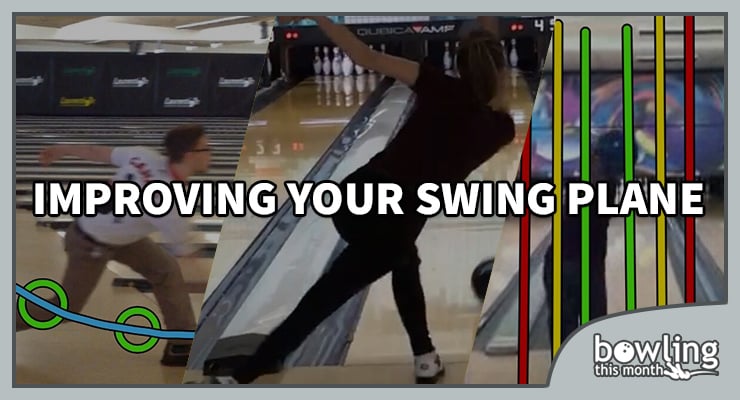 Most readers of Bowling This Month are probably aware that a bowler’s armswing should be straight. Exceptions notwithstanding, it’s generally accepted that the straighter an armswing is, the more likely it is to be effective, efficient, and versatile. That being said, achieving a straight armswing is easier said than done considering all the moving parts that are involved.

This article will address the specific portions of the armswing, corrective methods, and the cause and effect relationships that certain kinds of swings will have on a bowler’s game. The first thing to understand is my use of the term “swing plane.” It is used in two ways, depending on which direction you are facing. From behind, the swing plane is an indication of direction. As mentioned above, you’re generally looking for it to be straight. From the side, swing plane is more of a description of shape. Other coaches might use different terms to describe the two views, but I prefer to use just one term, clarifying which one I mean whenever I’m discussing each element of the swing.

As part of this series of articles, it’s worth reminding our readers that there is no perfect swing plane. It is one of the Seven Common Problems, and it is also variable based on a bowler’s height, body type, and flexibility. That said, great bowlers tend to fall into an accepted range of where the swing plane is, and it’s this goal that every bowler should be striving for.

Like most sports, bowling’s technical component has evolved over time. The advent of flaring cores, porous coverstocks, and the need for more and more oil has changed what the ideal physical game is. It seems there is a constant battle between some of the “old school” and “new school” ways of thinking, but, fundamentally speaking, the armswing hasn’t changed that much. From behind, it has always been something that coaches try to get straight. From the side, however, is where it has changed quite a bit.

The classic armswing—broken down into the individual components corresponding to the steps—inevitably looks something like this:

The words might vary a little bit, but that’s the general four-step swing breakdown. It can still be an effective method, particularly for those just learning the game. There are still many top players (especially women) that use a full “pushaway” in their delivery, something the modern game tends to discourage.

As a player develops and transitions to more of the modern power game, the timing of the swing needs to be refined—along with some elements of the swing plane—so there is a more effective way of describing that movement. A newer way to look at the mechanics of a swing, again broken down into individual components, could look like this:

You’ll notice that in this case, I’ve separated the follow through, and you’ll see why when we break down that swing component a bit later. The reason I break it down this way is because, in my experience, when correcting swing plane issues, the backswing and the downswing almost always need to be corrected separately. It’s very rare that someone corrects both at the same time on the first try.

Let’s take an in-depth look at each swing component. We’ll discuss the swing plane attributes that bowlers should strive for, as well as how they and their coaches can correct some of the more common swing-related issues that hold bowlers back in the modern game.

First, I still like the term “pushaway.” It flows better in conversation and, as long as we (the bowler and I) are clear that pushaway doesn’t mean to extend the arm fully ...

Keeping It Simple: The Armswing

Out, down, back, slide