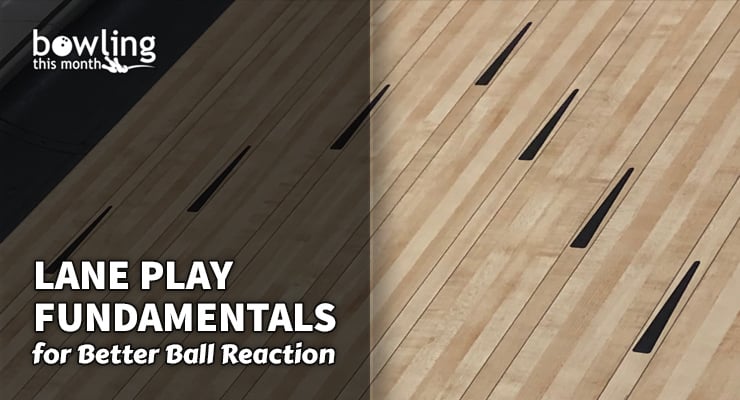 Over my last three articles, we’ve covered three of the physical adjustments that a bowler can make to alter their ball motion: axis control, ball speed, and loft. However, the most common adjustments—and the first ones we learn as bowlers—are the simple lane play adjustments with our feet and eyes. These affect ball motion by changing when and how much oil the ball encounters on the lane. This is typically the adjustment of choice for most people, and it is also the simplest—there’s no real practice required, except when forced to play an area of the lane that is not as common for you, such as extreme outside or inside lines.

The perceived simplicity of these adjustments often leads coaches (myself included) to ignore these basics when working with intermediate, or even advanced, bowlers. With that in mind, we’ll start by discussing the fundamentals of lane play by reviewing the very basics of boards and dots, and then go into the two basic types of line adjustments: angle changes and parallel moves.

Let’s set the stage by telling the story of a lesson I gave many years ago, with a student who’d bowled for several years and was starting to take it more seriously. We’d been working on some physical corrections for a few sessions when, one day, I asked him to move left, because the changes we’d made were giving us more hook. So he moved his feet five boards left, or one dot over. I told him that was too much and asked him to only move a couple of boards, and his response was, “What boards?” Let me repeat, this was someone who’d been bowling for years, but had never paid attention or been taught what the boards were.

This is a dramatic example, but not a unique one, where beginner bowlers never learn about boards or dots and still manage to progress into a solid intermediate-level player. But eventually, this lack of knowledge holds them back. Boards are so fundamental that we often take them for granted, but let’s consider the idea of synthetic lanes for a moment. Boards existed on wood lanes because that’s how they were built. Synthetic panels have no need ...