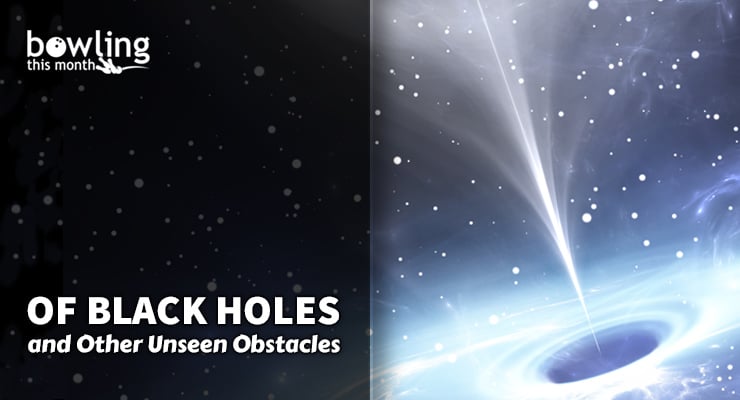 While my interest in the cosmos has waxed and waned over the years, it has never abandoned me completely. Now, with more time on my hands resulting from being able to spend less time in the bowling center and on the golf course, I often find myself sitting in wonderment in front of the Science Channel, thinking about how our knowledge has changed from the time when I was a fourth grader and Pluto was still a planet, to today when astronomers are able to see the light from galaxies as they were being formed over 13 billion years ago.

One particular episode of Through the Wormhole caught my attention and got me thinking, which is always a dangerous proposition. This episode dealt with black holes, a phenomenon that exists throughout the universe. Black holes contain so much mass, with such a strong  resulting gravitational pull that everything around them is drawn in and nothing can escape—not even light. Because light cannot escape from a black hole, black holes cannot be seen. They are totally black, against the total blackness of the universe.

Even though black holes can’t be seen, scientists know that they exist because of how the forces from their massive gravitational pulls affect everything around them. It’s kind of like seeing an illustration of our neighborhood star, the sun, with all eight planets orbiting around it at varying distances and varying speeds. If you took out the sun and showed a scientist just the planets in their orbits, he would know that there was something there, even though he couldn’t see it. He would know that because it could only be the gravity of a very large object that could cause the planets to circle it.

Next, let’s talk for a moment about gravity. Gravity is the attraction between all objects. The more mass that the object has, the greater its gravity. Gravity is why we are able to stand on the surface of the earth without floating away to outer space. It is the reason that the eight planets, the asteroids, and the comets revolve around the sun. Gravity is the basic force that holds things together, yet scientists really don’t understand what makes gravity. They do know, however, that it is one of the strongest forms of energy on our planet as well as throughout the universe.

So what does all of this have to do with modern bowling? Bowling, like trying to find black holes, deals with two invisible obstacles with which we must deal: oil and topography.

Most bowlers think that they understand oil on the lanes. Many of these bowlers, however, get very confused when we start talking about topography. Topography has virtually nothing to do with the oil on the lane. If anything, I’ve come to ...

Image credit: Black hole concept art (©iStock.com/Pitris) is licensed for use by BTM and is the copyrighted property of its original creator.