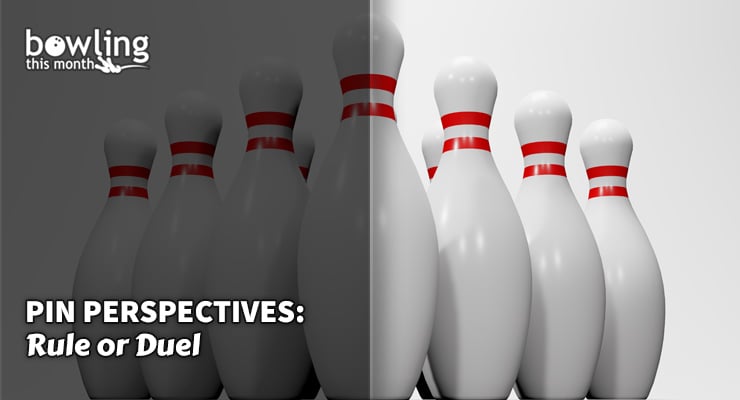 Bowling, like any sport, has its unique set of playing rules, without which we wouldn’t know what we’re supposed to do, where we are supposed to do it, and how. Rules provide more than mere structure to an activity or sport; they also guide us in handling unforeseen playing situations. At the same time, no rule or rule-maker can possibly conceive of every playing situation or scenario, so rules are also subject to interpretation. But before one interprets a rule, one must learn and understand it clearly, which sometimes requires some historical perspective.

It is when bowling’s playing rules are misunderstood or inaccurately stated, and then incorrectly interpreted, that the fun part of bowling comes to a screaming halt and we are faced with “Rule or (verbal) Duel!”

In our sport’s early days, there was no standardization. Alleys were of varying lengths, widths, and quality, balls were of all different weights and diameters, pins were in all shapes, sizes, and weights, and one alley’s or bowling club’s playing rules, if they were even written down, wildly differed from another’s.

According to the USBC’s website, the era of standardization began as follows:

In 1875, delegates from nine bowling clubs in New York and Brooklyn met in Germania Hall in the Bowery and organized the National Bowling Association. This was the first attempt to bring order out of chaos.

Disagreement raged between East and West, principally the alignment of New York State bowlers against everyone else to the west. On Sept. 9, 1895, the American Bowling Congress was organized in Beethoven Hall in New York City.

A group of 40 women, encouraged by proprietor Dennis J. Sweeney of St. Louis, met at Sweeney’s establishment in 1916 and formed what was known as the Women’s International Bowling Congress.

“Order out of chaos” is a pretty good explanation of why bowling needed and still needs playing rules. In the USA, when your league and mine apply for USBC certification, we are both agreeing to play by the same rules. This creates the ideal competitive environment, where every bowler knows exactly what ...