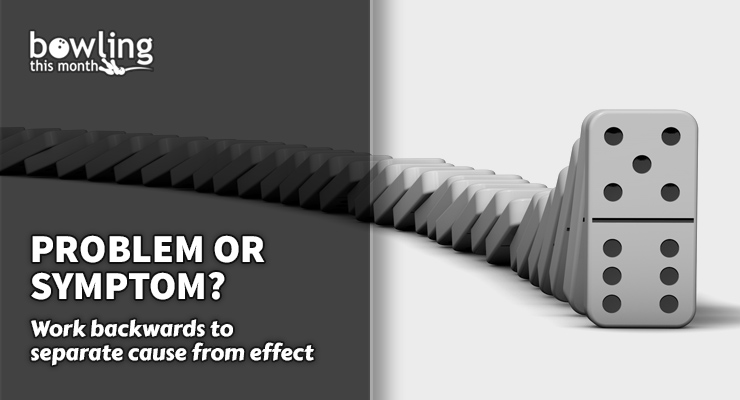 In bowling, it can be easy to forget that what seems to be a problem is usually a symptom of an underlying issue. For example, when someone (see below) says, “Geez, I keep pulling the ball,” the real problem most likely has nothing to do with pulling the ball.

Let’s take a look at a few common situations and separate the problem from the symptom. The examples here are from people I know—real bowlers dealing with real issues.

Jason has been my student for a couple of years. He’s gone from a 135 average to a very impressive 174, and he continues to improve. Sure enough, though, Jason does tend to pull the ball quite often. A lefthander, at release his follow through frequently finishes with his hand in front of his right shoulder, palm down. As you might guess, when this happens, his ball either hits the nose or crosses past the headpin and into the 3 pin.

Jason says he works to correct this issue during practice. “How do you try to correct it?” I asked him. “Well,” he says, “by trying to force myself to follow through in front of my left shoulder. Doing that at least keeps the ball near the pocket.”

What’s wrong with this picture? Well, in trying to force himself out of a tough situation, Jason has simply added to his troubles because he’s also now muscling the ball instead of swinging it.

When I took a video of him bowling, Jason was astounded at what he saw. Rather than walking with his shoulders and hips open, thus allowing the ball to swing smoothly past his left leg, unimpeded, he was completely closed. With closed shoulders and hips, the ...

Image credit: Dominoes illustration (©iStock.com/image_jungle) is licensed for use by BTM and is the copyrighted property of its original creator.