In this month’s issue, I present a study I conducted at the Kegel Training Center in February 2011 to measure the impact of a two-tiered pre-shot routine on shot consistency. The two-tiered process includes an elongated breathing technique and an effective and proven targeting process. This complete process was designed after a review of research on psychophysiology, which is the study of the interrelationship between the physiological responses and psychological aspects of a player.

With the pre-shot breathing protocol added, C.A.T.S. revealed a significant improvement in a bowler’s ability to execute more consistent shots. Specifically, six of seven bowlers in the study improved their breakpoint consistency by an average of 4.4 boards over ten shots. Three of the bowlers improved their consistency by over five boards. Six of the seven study participants improved their accuracy in the front part of the lane as well, with an average improvement in consistency of .79 boards at 15 feet. Finally, five of the bowlers improved or equaled their speed consistency, suggesting that the adding breathing technique helped to reduce body and hand  tension as well as grip pressure.

To illustrate, Table 1 presents the findings of a study of the breathing patterns of golfers of varying abilities and experience. In this research, Neumann and Thomas (2009) explored the relationship of the respiratory system on peak performance in golf putting.  From the study, it was revealed that the breathing pattern of elite golfers is different than experienced and novice golfers. 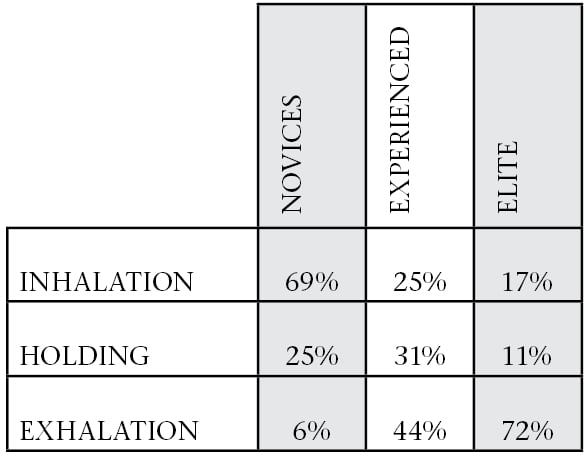 As the table data demonstrates, breathing patterns were substantially different between the elite and other golfers. 72 percent of elite golfers exhibited exhalation patterns that indicated heart rate deceleration started sooner and was greatest at the point of contact with the ball. The overall heart rate of the elite golfers (mean/average beats per minute) was less than the novices or experienced golfers.

In this study, researchers found that pre-release tension in international athletes was significantly lower than national or club athletes. Overall tension was also lower in international athletes than national or club athletes. Specifically, when the researchers measured the flexor digitorum and the extensor digitorum, the national and club athletes had unnecessary muscle tension while the international elite athletes had less tension. This was particularly true in the analysis of the golfers, archers, and marksmen. The flexor digitorum and the extensor digitorum are located in the forearm and hand and control finger movement back and forth. This, of course, would indicate the level of tension directly related to movement of the hand, wrist, and forearm.

Tension is increased with the introduction of stress. Stressful situations are the key to understanding the importance of psychophysiology. When stress or anxiety is introduced, the physical game of athletes can change, impacting the quality of execution during critical competition moments in particular. Specifically, when one is stressed, the physiological response is shallower breathing.

Yoshifumi and Hiroshi (2010) released a study of six male professional golfers and five male novice golfers this past December. These researchers explored baseline putting under normal conditions as well as the physiological changes brought on by the introduction of competition anxiety. Stress was induced by adding a small audience and a monetary reward for performance. The addition of stress provoked a reduction of the height of the backswing for the golfers. Moreover, forward club speed decreased for both amateurs and professionals in the pressure situation. Finally, heart rate averages under stress increased by ten beats per minute as compared with the normal baseline.

To improve one’s physical execution, the importance of breathing can’t be over-stated. Breathing and physical execution quality is impacted negatively with the introduction of a stressful situation. Accordingly, a purposeful breathing protocol added to the three-point targeting process will dramatically improve accuracy and repletion quality by keeping the individual bowler more focused which will reduce body tension and promote heart rate deceleration.

Eight men from the Webber International University bowling program participated in the study. Each player has been trained in the three-point targeting with quiet eye system and utilizes it as part of their targeting process.

Each bowler was instructed to warm up until they perceived themselves to be ready to throw ten consecutive consistent shots. Most bowlers took approximately ten shots to warm up. After the completion of warm up, the bowlers completed a full ten shots on C.A.T.S. without moving their feet or their eyes. After the ten shots, C.A.T.S. reports were printed and labeled. (see C.A.T.S. graph) 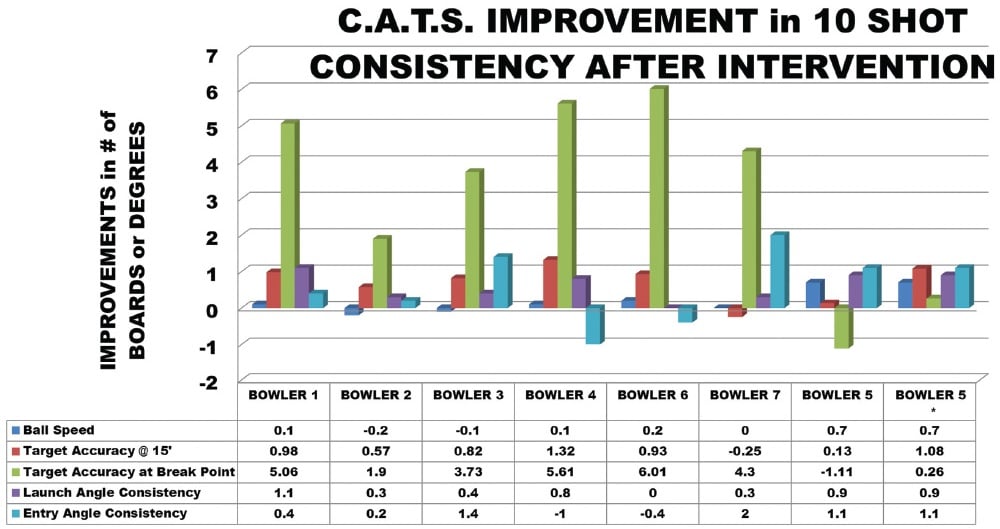 After the seven bowlers completed C.A.T.S., I instructed them on the process they would utilize in their second set of C.A.T.S.  Bowlers were told to:

Table 2 presents data illustrating the impact of the pre-shot breathing process. The data represents the specific improvement in consistency of boards and angles. A higher number represents a larger improvement while a negative number reflects a decrease in improvement.

In addition, here are quotes from the bowlers. When asked what felt differently, the bowlers replied:

“Before, without this, I was not consistent. This adds something to my pre-shot routine. Now, I can execute the same way each time.”
(Bowler 1)

“It allowed me not to rush my shot like I always used to do.”
(Bowler 2)

“I felt more relaxed and confident I could keep my speed more consistent.”
(Bowler 5)

“It got my heart rate in rhythm with what I wanted to do. I felt my heat beat slowly. In the past, I used to tell myself to go slow but couldn’t.”
(Bowler 6)

The extended breathing protocol obviously aids in reducing the bowler’s heart rate. Exhaling when throwing mirrors what elite athletes do in regard to heart rate deceleration. Both result in reduced tension just before and through the point of execution. Finally, taking deep breaths while targeting the focal point and front target also ensure that the bowler employs a quiet eye.

Heart rate deceleration, reduced body tension during execution, and an enhanced quiet eye are contributing factors to excellence in shotmaking. When a bowler has a pre-shot routine, with breathing described above, it will improve the likelihood that the bowler will make a better quality shot when it matters most. Specifically, when stress and anxiety associated with a key moment lead to shallow breathing, heart rate increases, and physical game tension, this extended process will help bowlers execute better shots, time after time.

Davis and Sime (2005). Toward a Psychophysiology of Performance: Sport Psychology Principles Dealing with Anxiety. International Journal of Stress Management ,12 (4): 363-378.

Neumann, D.L., Thomas, P.R. (2009). The relationship between skill level and patterns in cardiac and respiratory activity during golf putting. International Journal of Psychophysiology. 72: 276-282.

Yoshifumi, T. &  Hiroshi, S. (2010). The influence of audience and monetary reward on the putting kinematics of expert and novice golfers. Research Quarterly for Exercise and Sport 81 (4): 416-424.