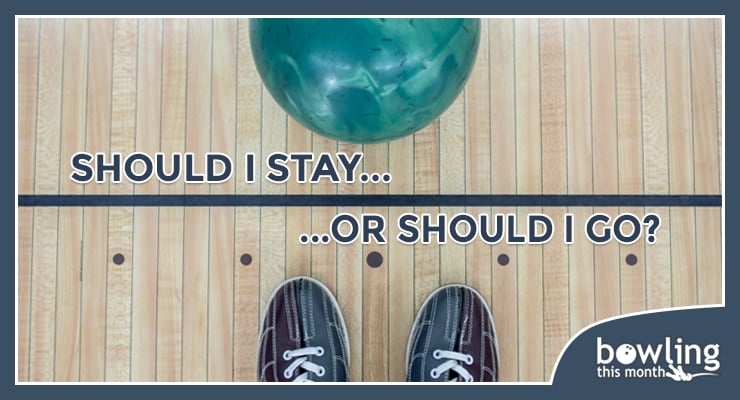 Among modern bowling coaches who teach bowlers competing primarily on house shots, one of the most divergent viewpoints centers around the choice that bowlers have between making lateral moves on the lane and making ball changes in response to oil pattern transition.

Looking back to the pre-modern era, bowlers had very little choice in the matter. We bowled with one bowling ball and, as the lanes changed, we either moved laterally in from our starting track area shot as the oil line dried up, or laterally out to compensate for the carrydown that was prevalent in the days of plastic and urethane bowling balls.

Today, so many things have changed that bowling is virtually a different game. In the days of pre-modern balls, bowlers needed friction to help the ball to hook. Today, too much friction is the enemy, resulting in a loss of energy and a corresponding loss of carry. As a result, while we used to look for friction for help, today we look for oil for help. Today—with some exceptions—carrydown does not exist, so we always move laterally toward the inside part of the lane to find the oil we need to help our ball conserve energy. We know that a move to the outside on a house shot will only find more friction, which will rob the ball of even more energy.

Another big change in modern bowling is the tremendous diversity of styles, particularly among righthanders (but, thanks to Jesper Svensson and a few others, the lefties are going to find themselves in their own changing world in the next few years). It is not uncommon in league bowling—particularly among the higher average leagues—to find some bowlers playing the typical second arrow track shot, others starting at the third arrow, and still others starting around the fourth arrow and throwing big sweeping hooks. Who you are bowling with—both on your own team as well as the opposing team—often determines not only what ball you are going to use to start your league session, but also what line you are going to play to ...

Image credit: Bowling ball and bowling shoes background image (©iStock.com/andresr) is licensed for use by BTM and is the copyrighted property of its original creator.