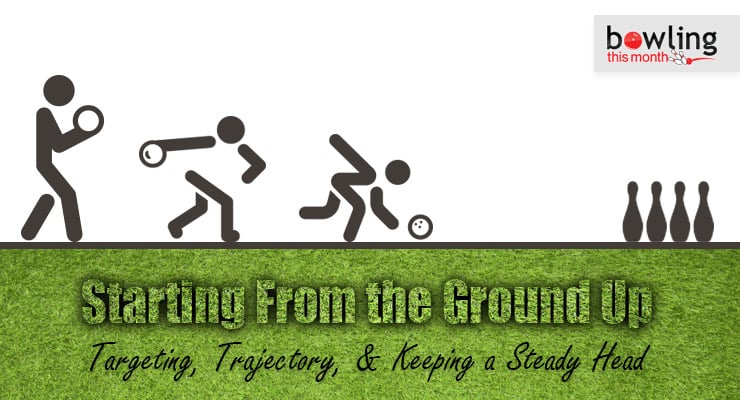 The final chapter in the From the Ground Up series, for obvious reasons, is the head. For the most part, when bowlers and coaches talk about the head in bowling, we are referring to the mental or tactical game. In reality, what you do with your head from a physical point of view is also important, from how you use your eyes in the setup to its position through the release.

There are several factors that go into using your eyes properly when bowling. Effective targeting is an important part of the game, but the big question is at which depth should you look when targeting? Most commonly, at the beginner level bowlers target pins, arrows or dots as they improve, and later become aware of the importance of breakpoints and exit points (see Canuck Coach’s Corner). Some will even target their laydown point or look at the dots in front of the foul line. Which one is best?

The one thing that is almost universally agreed upon is that targeting pins doesn’t work. It is easier to hit a target that is closer to you and, when you are not throwing something in a straight line, it is more effective to pick a point along the intended path.

After that, looking at the laydown point or foul line affects your head and posture in a negative way and is generally considered the second worst of the targeting systems, although back-to-back Canadian National Champion David Simard does just that. Looking at the foul line will generally cause bowlers to tuck their head down, which is an inefficient position for the spinal column doing any kind of movement. It can also cause too much forward posture, which limits leverage and the ability to follow through.

The dots are a more common targeting tool. As a primary target, their main drawback is that they do not go all the way across the lane. There are no dots in the middle of the lane and bowlers must pick out boards without any significant identifiers. Depending on the bowler, the dots can cause some of the same issues as looking at the foul line and more often than not, looking closer to the foul line is associated with earlier roll for when lanes are oily.

Arrows are the most common targeting tool. They create an approximately 3:1 ratio dividing the portion of lane in front of them and the back of the lane behind them, making for easier adjustments. It is a comfortable distance for many, allowing the head to stay straight atop a slightly forward posture.

Breakpoints are commonly used among more competitive bowlers, but not always as primary targets. The understanding and use of breakpoints gives rise to the best targeting method, which is trajectory based.

Knowing the trajectory you’d like to achieve and visualizing the path the ball will travel is about more than a single point. The targeting methods above imply that the target is a single board at a specific depth on the lane. In reality, the target is, and always will be, the pocket. What changes is the path to get there.

That being said, effective targeting relies on seeing multiple points along the path and choosing to look at the ones most suited to your game. For some bowlers, the arrows and breakpoint will be the primary and secondary points, while for others it will be the dots and laydown area.

What’s interesting here is that in talking with many high performance athletes, it’s clear that how a bowler sees the lane and the resulting effect on their shot-making (or at least the perceived effect) is different. For example, some bowlers will move their eyes farther down lane when trying to extend through the shot and get more length, while others find that same adjustment causes them to hit up on the ball causing earlier hook.

The important part of targeting is learning what is best for your game, not using a cookie-cutter approach. Different targeting depths can all be associated with negative physical effects and bad habits, which is why it is important to focus on the trajectory of the ball over single-point targeting somewhere along the ball path. For many, the simple act of staring at or focusing intently on a single target point is the very cause of problems.

Team Canada member and Steve Nagy Sportsmanship award winner on the PBA Tour George Lambert IV said it best in a recent conversation. “The more I focus on that target, the less I hit it.” Knowing where you want the ball to go is more important than trying to hit a specific spot. For the same reason that beginners have a hard time with spares because they are so focused on the pin, more advanced players can become overly concerned with hitting a target.

Unlooking is the ability to look at a single point along the desired trajectory without placing undue importance on that specific point. For the most part, the intended path of a ball should be wider than a board. Therefore, hitting an arrow or a dot is irrelevant in the greater scheme of things. Like a car on a multi-lane highway, effective bowling is knowing that you’ve got more than one lane that will take you to the right place.

With correct fundamentals, simply telling your body to “throw the ball that direction” will be enough. This kind of targeting keeps tension away, allowing more accuracy than if you were actually trying to be accurate through intense focus. A word of caution though – there is a fine line between unlooking and not paying attention whatsoever. You should always know where the intended path of the ball is and the important points along that path, even if you are not letting any single point become your only focus.

Head movement during the approach

In discussing targeting, one of the negative effects associated with different target systems is what the head does during the approach. With all the moving parts of a bowling approach, the head is the one part that is expected to stay still. A lot of times, well-meaning friends will suggest “keep your head still,” when in reality head movement is more often a symptom of another problem.

Sometimes you’ll see bowlers lunge their head at the foul line. While remaining relatively still for most of the approach, the bowler suddenly thrusts their head and shoulders forward prior to releasing the ball. This kind of awkward movement just prior to release is often caused by early timing. With the ball ready to be released and the body out of position, there is a sudden need to get the center of gravity forward. The head and upper body shoot forward in an attempt to maintain equilibrium.

Quick fix: Identify the cause of the early timing (usually the feet) and focus more on that aspect of the approach, along with keeping the core stable. The head will naturally move much less.

Everyone knows the bowler who seems to have a pretty solid approach until just prior to release when suddenly their head jerks left (for a righty) so they appear to be looking three or four lanes over while releasing the ball. The most well-known bowler with this kind of movement is Tommy Jones, although his is much more subtle than we often see in league. His ability to keep his swing online is the antithesis to this kind of problem, most often caused by pulling the ball down from the top of the swing.

Quick fix: It could be slightly late timing or it could be simply muscling the ball too much. Get the ball started earlier or work on bringing the ball down with your hand, not your shoulder.

Often associated with high backswings and steep swing planes, bowlers who tuck their chin and bob their head in a U-shape as the ball comes down in the swing resemble chickens bobbing their heads as they walk. It’s usually not as noticeable from behind, but from the side you see that instead of a steady head throughout the release, the head goes down then up as the ball comes out of the hand. Any upward motion during the release is typically not a good thing.

Quick fix: Make the swing plane shallower with earlier timing or adjusting the footwork for a longer slide. If the whole torso is bobbing, work on maintaining good posture throughout the approach.

Many bowlers have learned the ‘rule of 31’ over the years. Not so much a rule as a guideline, it is a basic mathematical formula to help bowlers figure out how to attack different patterns:

From the feet to the head

Throughout this series, each area has been isolated in order to discuss some of the more important aspects of the movements related to that area. However, to view the approach in anything but a holistic view is ignoring the obvious. Every movement is related to another and the sum of the movements is what allows us to transfer energy to the bowling ball. Here are a few things to keep in mind about how inter- related everything is:

Remember you will require different positions and movements, based on body type, flexibility, etc. When working on improving a weakness, maintain what you already do effectively.

Image credit: Grass background image is licensed for use by BTM and is the copyrighted property of its original creator (©iStock.com/antpkr). Bowler and bowling pin illustrations are licensed for use by BTM and are the copyrighted property of their original creator (©iStock.com/iaRada). Unauthorized reproduction and/or reuse is prohibited.