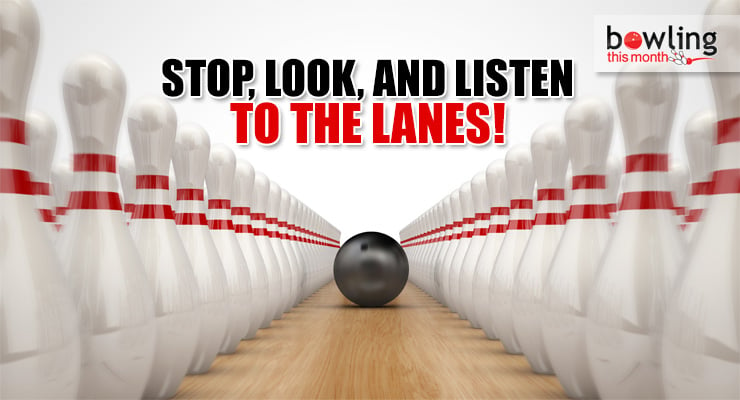 One of the most significant differences between traditional bowling with non-reactive bowling balls rolled on wooden lanes and modern bowling using reactive balls on synthetic lanes dressed with synthetic oils is the wide variation of conditions from lane to lane and pair to pair. Years ago, bowlers had the luxury of playing the same line that they played the week before in league and assuming that the two lanes on their pair would play the same. Those days are gone forever. To be truly prepared to bowl today, you need to forget the shot you played last week, the ball you used last week, and most of all, you need to learn to assume that the two lanes on your “pair” are much more likely not to match each other, so that you can be pleasantly surprised and shoot lights out if they happen to play the same.

Paying close attention to all of the factors that can influence how the lanes want to be played will give you an advantage over your competitors who aren’t as perceptive. Let’s take a look at all of the things that affect how the lanes play for you on any given day.

The lane is divided into three parts: the heads, the mids, and the back end. Traditionally, bowlers played the oil line that started in the front part of the lane (the heads) and ran pretty much parallel with the boards for the length of the pattern, When the ball exited the end of the pattern, it encountered friction and began to hook toward the pocket. As the oil began to dry up, bowlers made parallel moves, usually two boards with their feet and one board with their eyes, and maintained roughly the same angle to the pocket throughout a typical night of bowling. Today, however, the bowling balls are much more absorbent, drying the lanes out very quickly, particularly in ...

Image credit: Bowling pins / lane / ball illustration (©iStock.com/bisli) is licensed for use by BTM and is the copyrighted property of its original creator.