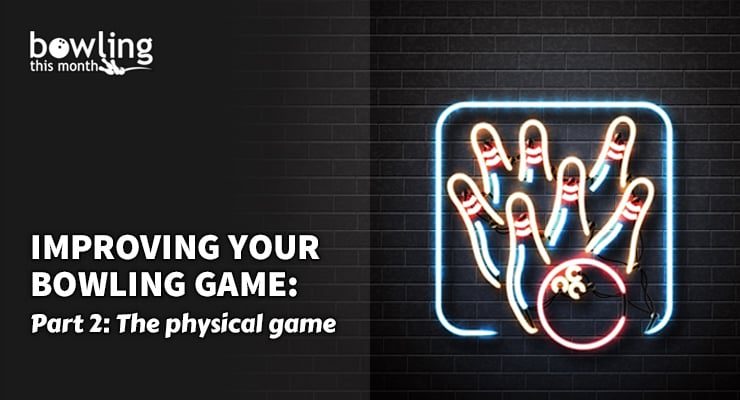 A few months ago, Part 1 of The Basics of Improving Your Bowling Game series was published, focusing on the tactical side of bowling and answering questions that you might not have asked before about the pins, the lane, oil patterns, and bowling balls. This month, we’re going to focus on the physical game.

Once again, this article is aimed at beginning and experienced bowlers alike, with both basic and more advanced looks at different technical elements of the bowling delivery. One of the mistakes that I see most often is beginning bowlers trying to apply higher level physical game concepts before their basic fundamentals are in place. If you’re a beginner, be sure to focus on the fundamentals first.

This article will focus on three key areas of the physical game: footwork, armswing, and finish position. The basic and advanced concepts sections apply primarily to traditional one-handed bowlers, but I’ll separately provide tips on each of these three areas for two-handed bowlers.

Footwork is pretty straightforward; just walk up and throw the ball, right? Almost. Most beginners throw the ball almost entirely with their upper body, and that’s usually because their footwork and posture are inefficient. At its most basic, footwork is about generating momentum. In order to do this, you need to take the right number of steps, the right distance from the foul line.

Most bowlers take between three and five steps in their approach. Beginners often feel this out, and at first it’s really more about comfort than function. Three steps is a relatively common choice to start for bowlers without coaching, but it’s not as efficient for the swing (which we’ll get to) as four or five steps. The vast majority of bowlers eventually switch to four or five steps. A five-step approach is functionally the same as a four-step approach, but with an extra timing step at the beginning. For simplicity’s sake, I recommend starting with four steps as a beginner, and then adjusting from there as the game develops.

The number of steps you take is really not as important as how far from the line you start, because that’s what dictates how long your steps must be, your stability, and your capacity to generate momentum. Maximum momentum (large running steps) generally leads to minimum stability, while maximum stability (small slow steps) generally yields little momentum. We want a good balance between the two.

One of the oldest tricks in the book is usually overlooked by those who are late starters in our sport (i.e. those who didn’t start in a youth league). The best way to determine approach distance is to start at the foul line with your back facing the pins. For a four-step approach, take five full steps forward with a normal spacing and turn around to face the pins. This should be your approximate start position. The extra step is added because the slide step is generally longer than normal walking steps.

Once the footwork basics are taken care of and most of the other physical fundamentals are in place, you can work on adding some more advanced technical elements to your game. The two more advanced concepts in footwork are the crossover step and the power step.

The crossover step is a technical way of saying that you put one foot in front of the other. In a four-step approach, this means that your first step, instead of being straight forward, will move diagonally, ending directly in front of your other foot. That’s it. It’s simple, but it’s not always easy to perfect. The rationale behind this movement is to create space for your armswing to be more efficient by getting the leg/hip out of the way of ...

Image credit: Neon bowling sign illustration (©iStock.com/ComicSans) is licensed for use by BTM and is the copyrighted property of its original creator.