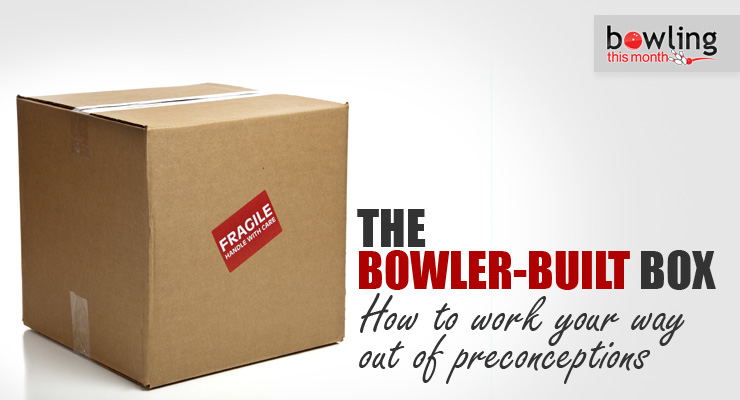 Many, many years ago as an undergraduate art major at California State University Northridge, I created a short animated film. It featured the white silhouette of a man on a black, star-studded background. The man was trapped inside a box. After struggling to get out of the box, the man finally succeeded in knocking it down only to find, as the camera receded, that there was a bigger box that still confined him.

Back when I was still a pretty good bowler myself, I bowled in a center where one particular pair of lanes used to give me fits. It was an end pair and the right lane hooked like crazy while the left lane was one of the tightest lanes in the center. For months I tried to overcome those lanes by using a weak ball on the hooking lane and an aggressive ball on the tight lane. The plan was a dismal failure. Finally, one night I decided to let the lanes dictate how they should be played. I used a hooking ball on the hooking lane and a less aggressive ball on the tight lane and averaged 240+ for the night. This was back when 730 was a pretty good series. Eureka! I had figured it out. I had finally thought “outside the box” and conquered my nemesis.

The next time I bowled on that pair, I confidently pulled out an aggressive ball for the hooking lane and a weaker ball for the tighter lane. I totally bombed that night. The camera had pulled back and revealed that I had escaped the first box, only to be trapped by a second one.

Thinking outside the box is one of the most overused and misunderstood phrases of modern times. In bowling terms, the box is our preconceptions. We all create boxes for ourselves when we bowl. Since beginning this article, bowler’s boxes are jumping out at me every time I walk into a bowling center. Let’s take a look at some of the boxes we create and figure out how to think outside of them.

Ever since the PBA introduced the animal patterns, bowlers have tried to anticipate how to play them. While the patterns themselves are consistent in terms of length, variations in the volume ...

Image credit: Box illustration (©iStock.com/miflippo) is licensed for use by BTM and is the copyrighted property of its original creator.