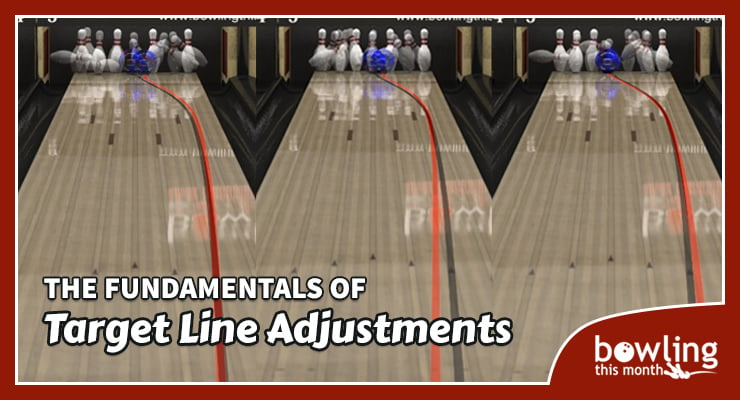 There are dozens of possible adjustments that we as bowlers can make to change where and how our bowling balls are entering the pocket. The first adjustment we typically learn—usually very early in our bowling careers—is how to move our feet and target.

In this article, let’s go back to the basics and discuss the fundamentals of target line adjustments. We’ll start with a basic overview of the target line, covering what specifically happens to the target line when we move our feet and/or target, and we’ll explore the effect of these movements at the pins. We’ll discuss many of bowling’s most common target line adjustments with some hypothetical real-world examples—the 1-and-1 parallel move, the 3-and-2 move, the 2-and-1 move, and more—and explore the how and why of their effect on the ball’s position at the pins. It’s going to be a long—but hopefully not bumpy—ride, so let’s get started!

Let’s start with something simple. In the beginning, you were likely taught to pick a target at the arrows and to position your feet so that you could launch your ball straight down the lane over your chosen target. The classic example is to use the second arrow as the target, which is on the 10th board from the gutter.

Now, the first thing that must be established before you can line up to play a 10-to-10 target line is where your feet need to be placed at the start of your approach. For most bowlers who have decent fundamentals, they’d need to finish their slide around board 16 or 17 in order for the center of the ball to be on the 10 board at the release point. And, if you’re like most bowlers, you’ll drift one way or the other by some amount during your approach. So, this drift also needs to be factored into your starting position.

Let’s assume that—through trial and error and through the help of a friend or video camera—you’ve determined that you have 6 boards of separation between the edge of your slide foot and the center of the ball at the release point. Hence, you need to finish your slide on board 16 in order to get your ball to land on 10. And, let’s assume that you’ve determined that you need to stand on 14 in your stance in order to end up at 16 at the release while targeting the 10 board. In other words, you drift two boards to the left, resulting in you sliding on 16 and then setting the ball down on 10, thanks to the 6 board separation between the ball and your slide foot at the release.

Now, let’s suppose that with this 10-to-10 target line, your ball is hooking too much and going high into the pocket. You’ll need to move your feet and/or your target to get your ball back into the pocket. The standard rules with target line adjustments say that you move your feet in the direction of the miss and/or you move your target in the opposite direction of the miss. So, assuming you’re a righthanded bowler whose ball is hitting too high in the pocket, the miss is left. So, the correction calls for moving your feet left and/or moving your target right.

Keeping things simple, let’s say you choose to move only your feet. So, you decide to move 1 board to the left in your stance to the 15 board. Now you’re playing an 11-to-10 line, right?

Well, that’s what many beginning (and even advanced) bowling instructional resources would lead you to believe, but it actually isn’t quite correct.

As a disclaimer, it should be mentioned that it is impossible to say with 100% certainly what exact line you’re now playing after moving your feet 1 board left. But, a best-guess approximation is that you’re now playing a 10.5-to-10 line. The reason for this is that your launch angle has changed as a result of the move in, and—assuming you’ve opened up your feet, body, and shoulders correspondingly in your stance—your feet and approach will roughly follow the direction of this new launch angle. If you consider the simplification (as most bowling instructional texts do) that your approach is about 15 feet in length, and that your target is about 15 feet past the foul line, then it stands to reason that you’ll have walked back to the right in the amount of half of your stance adjustment by the time you get to the foul line and release the ball. That’s how we end up with the 10.5-to-10 line.

What about the case of moving the target instead? Let’s go back to our original 10-to-10 example where the bowler’s ball was going high into the pocket. Since the miss was left, the target adjustment would need to be to the right. So, the bowler moves his target out to the 9 board. With the target on 9, the bowler is now playing a 10-to-9 line, right?

Once again, that’s not quite right, and it’s for the exact same reason. When the target moves out to the 9 board, the launch angle has again changed. With this new target, the feet, the body, and the shoulders should be angled slightly more to the right (slightly more open) in the stance, which will cause the feet to travel more to the right during the approach. Once again, using the same approximation used above, we’ll have walked about half of the distance of the target adjustment to the right by the time we get to the foul line and release the ball. So, in this case, we’re now actually playing a 9.5-to-9 line.

A 1 board move with your…

At this point, it’s worth pointing out a related inaccuracy. If you’ve studied bowling for very long at all, you’ve likely heard or read something like the following:

These numbers simply aren’t correct. Again, using the 15 feet target distance and 15 feet approach distance approximation, the correct numbers are actually 1.5 boards and 2.5 boards, respectively. I’ll mostly leave this to you to work out and prove to yourself, but here is the basic concept: moving 1 board in with your feet in the stance will put the ball 0.5 boards in at the release, 0 boards in/out at 15 feet, 0.5 boards out at 30 feet, 1 board out at 45 feet, and 1.5 boards out at 60 feet. Similar logic holds for the target adjustment.

Some common adjustments and their effect – on a flat oil pattern

With the basics out of the way, let’s take a look at some of bowling’s most common target line adjustments and examine their effect on where the ball ends up at the pins. In these examples, we’ll deviate slightly from the convention and use what are probably slightly more common target and approach distances of 13 feet. This corresponds approximately to the distance of the second arrow from the foul line and an approach starting position of a couple feet in front of the back edge of the approach.

Obviously, the distribution of oil on the lane plays a big role in whether or not a given target line adjustment causes your ball to hook more or less than it did pre-adjustment. We’ll take a look at this effect in more detail later, but, for now, let’s assume that we’re bowling on a perfectly flat oil pattern, with equal distribution of oil all the way across the width of the lane. This will allow us to take the effect of oil distribution completely out of play so that we can focus more on the “geometry” of the various adjustments. That is, we’re interested first in gaining an understanding of how the various target line adjustments change the position of the ball at the pins, absent all other factors. An understanding of this will aid us later when we add back in the effect of oil distribution.

Our “baseline” shot in these examples will be one that is delivered along a 13-to-10 line, as shown below.

This shot is obviously perfectly fine as-is and wouldn’t really require a target line adjustment, as it hit the pocket on the 17.9 board—very much in the “high flush” zone. But, let’s go ahead and make some adjustments anyway, just to see where each one puts the ball at the pocket as compared to this baseline shot.

As you can see, this adjustment puts our ball lighter into the pocket, entering on the 16.1 board, which is about 1.8 boards lighter than the baseline shot.

Now, instead of moving our feet, we’ll leave our feet in the same spot and move our eyes to the inside by 1 board, which is ...

Bill is the founder of BTM Digital Media, LLC and he manages the day-to-day operations of Bowling This Month. He has a graduate degree in Mechanical Engineering, he developed the Powerhouse Blueprint ball motion simulator, and he has been an avid bowler for more than 20 years. Bill currently serves on the Board of Directors of the Greater Cincinnati USBC.