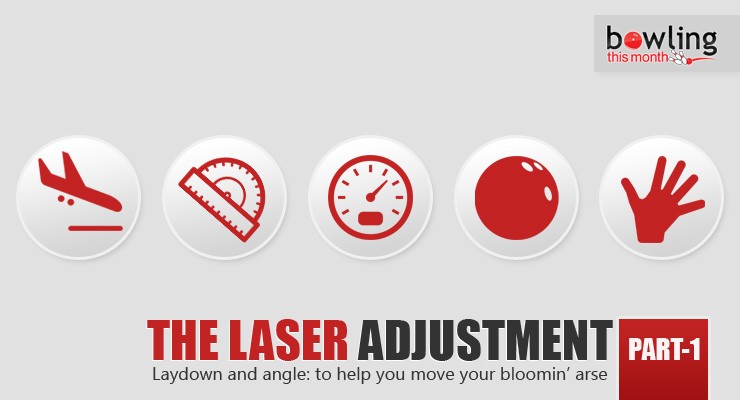 Several years ago I wrote an article in this magazine about adjustments. Essentially it said that everything you know, every adjustment, every nuance, every trick of bowling knowledge you have can be placed in one of four categories: Angle, Rotation, Speed, or Equipment – ARSE. That’s how Move Your Bloomin’ Arse was born.

I’ve found that’s not quite enough. There’s another adjustment we can all use effectively to not only improve pocket percentage but also tweak carry. It’s where you lay the ball down. So, laydown point is now part of your adjustment arsenal and the acronym is LASER. This month I’d like to talk about the first two categories, Laydown and Angle. I’ll talk a bit about each, how to perform them, and most importantly, when to use them.

L is for laydown point

You know the heads dictate everything that happens down the lane. Your ball must skid, hook, and roll in the proper places on the lane to be effective. If your ball doesn’t skid enough, it will get into hook-roll too early. If it skids too much, it will begin the process too late.

Let’s look at these two conventional thought scenarios. One says that you loft the ball when it’s hooking too early and the other tells you to lay it down sooner if it’s going too long. It could be that either of these adjustments will have the opposite effect of what you want.

You know that today’s equipment removes oil from the lane. This tends to dry up the front part of the lane – it’s commonly said that the heads are sparkin’, crispy, toast, or fried in the current lingo, sometimes called blowing a hole in the pattern.

So, if you lay the ball down in this blown up area, it won’t skid enough. It will get into its hook-roll pattern too early. If, however, you loft the ball over the fried part of the heads and into a heavier concentration of oil, you should get skid, which will delay your hook-roll. So, in this example, lofting the ball accomplished what you wanted — it delayed the hook.

What if the ball is going four feet too far before it makes its move toward the pocket? If the ball is not hooking as early as you’d like, even though conventional thought says to lay the ball down sooner to get it rolling sooner, you realize if you did that when the heads are toasty, you won’t get later movement. The ball will move sooner since the skid has been reduced by how dry the heads are. So, the “early laydown = early roll” formula won’t work unless the heads can provide you with the skid you need.

Sometimes, instead of going longer and hooking later, a lofted ball will hook earlier and finish strongly. It is pretty common that there is more oil on the heads since they take the most abuse. It could be that if your ball is hooking too early, rather than lofting it, you need to lay it down sooner to take advantage of whatever oil is in the heads.

Speaking of loft, here are some hints about how to do it. It can be a simple matter of just delaying your release a nanosecond. Most of us don’t have a conscious thought about when we release it. It’s just time to let it go, so we do. Just delay that release a hair. That will get the ball further out on the lane while not having its path in the air look like a camel’s hump. It is still your nice-smooth-airplane-landing shape. It’s just that the first time the ball touches the lane is feet farther than usual.

Another tip for lofting effectively with control and intention is to use your legs. The lower your hips get at delivery the easier it is to lay the ball down sooner. The more upright you are, the easier it is to loft. I am by no means saying that your knees should be straight. You still must bend them and get your lower body low. It’s just not as low as “normal”. By the way, it is much easier to have “normal” be a lot of good knee bend and a great position at the foul line and change that to be a little more upright, than it is to have upright be “normal” and try to all of a sudden consistently get down and stay down at the line.

How do I know when to loft and when not to loft?

I’ve not found a foolproof way to know whether to loft it or lay it down early. It’s not like, “If this happens, loft. If that happens, don’t.” I wish I had such a formula. You could, of course, discover it accidentally. Ever gotten out of the ball earlier than you intended and struck? Everyone says, “Nice shot, Dufus. Drop it there again!”

Or perhaps you have that stick in the thumbhole moment—not the one that leaves the crater in the lane or where the ball barely misses sticking in the ceiling tiles. I mean the one where you just didn’t clear as well as you’d like and your thumb had just enough drag to give you some loft and you blow the pocket. Well, duh. What’s the message? This is not how you want to find out changing your north-south laydown point is the answer. Always try it in practice or early in the game if you don’t have enough practice time. It’s more fun if you do it on purpose…

Bonus tip: If you feel you are lined up to the pocket but can’t carry, change your north-south laydown point instead of your east-west laydown point and see if your carry doesn’t improve.

A is for angle

There are several types of angle changes. The one most people think of when talking about changing angle is moving the body (or body parts, like the eyes or torso or shoulders) in order to change the path of the ball to the pocket. The other type of angle change is to create a different entry angle into the pocket or a different exit angle off the deck by changing hand positions or equipment.

There are myriads of ways to change angle with body parts. You can move left, right, forward, or back. You can move only your eyes instead of your whole body. When you decide to move your feet a board left, for instance, your shoulder usually goes with you . A one board move with your feet will change your laydown point by one board in the same direction. That will change your angle.

You can also change angle with your legs. Really stay down with a shot. This will cause the ball to go longer and extend your breakpoint to help carry that 4 pin. Conversely, coming up slightly at the delivery point will cause the ball to make its move toward the pocket a bit sooner and could eliminate the half 10 leave.

Just a note here – that “coming up at the delivery point” comment does not mean rearing up at the foul line or delivering the ball with a straight leg. You are still in the awesome, bent knee, solid, balanced, leveraged position you usually are, just less so.

Another valid adjustment scenario requires a non-parallel and angled adjustment like moving five left with your feet and three RIGHT with your eyes. This move might open up the lane a little more for you. Experiment with parallel, dual, and non-parallel moves to determine which will work best for you on different conditions.

You don’t always need to make a large move like that, but if a better angle to the pocket is five boards left of where you are standing and you move one board each frame, the game is over by the time you’ve figured it out. Big moves can quickly set your parameters (where’s too far left and where’s too far right?) and you’ll know your shot is somewhere in between. In today’s game, 5/3 is almost a minimum move. It’s easier to fine tune with parameters than to fish around on all 39 boards! To quote the late BTM writer Rolf Gauger, “Overadjust and waste a frame; underadjust and waste the game.”