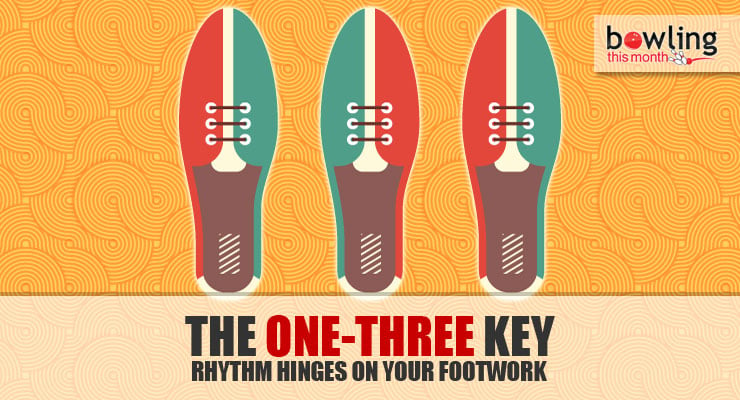 For a right-handed bowler, the term “one-three” represents the most crucial area of focus: the strike pocket. A short first step in tune with the pushaway and a short third step for power are an exercise I refer to as the “one-three” key for the four-step approach.

In previous columns, I have mentioned certain keys that can be utilized and practiced; keys that will eventually become routine with constant repetition. Remember that repetition creates habit … good or bad. Repeating a bad habit can only compound misery. Simply put, if you repeat bad habits, you’ll continue to suffer the consequences. Conversely, repeating quality execution will greatly enhance one’s game and chases away the bad habits.

A majority of bowlers require keys or elements of memory conditioning to fundamentally apply a maneuver that will trigger a given movement. Although the clue or suggestion (key) may seem awkward or unnatural, it can become simple and routine by virtue of repetition and duplication.

The focus here is on a four-step approach because it is the most accepted approach in the game. Many fine players utilize five or more steps. All systems can be seen as variations of the four-step, with additional steps applied for additional speed. So, five-step bowlers can apply this exercise to the second and fourth steps. There is one valuable key that will enable five-step players to better master rhythm and timing that can match the four-step approach. It is advisable to pause slightly after the first step in order to synchronize the pushaway with the second step. This is an exercise that has long been a trademark for bowlers from the St. Louis area; players like Ray Bluth, the late Dick Weber and his son Pete, Nelson Burton Jr., Ray Orf, and numerous other older stars of the past.

The “one” of the one-three key, occurring on the first step of the approach, is all-important because it is the key element in a smooth, fluid, and rhythmic approach. It is the principal controlling factor in a free armswing. The step must be short enough to permit the ball to ...

Image credit: Bowling shoes illustration (©iStock.com/vectorprro) is licensed for use by BTM and is the copyrighted property of its original creator.