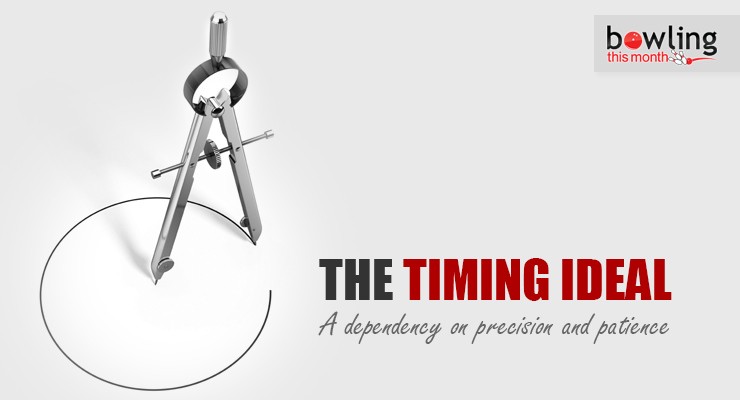 One of the most important aspects of proper execution in any sport is rhythm and timing.

In baseball, hitters, as well as pitchers, rely on timing to perform at higher levels. In football, despite the advantages of players being bigger and faster than ordinary athletes, the offensive aspect of the game is contingent on quarterbacks who rely on split-second timing as they release passes to swift evasive receivers.

Timing is of the essence in golf, basketball, and especially bowling. Bowlers are required to place balls that weigh anywhere from 12 to 16 pounds into motion and release them at the most advantageous area for maximum scores. Furthermore, this must be accomplished by virtue of coordination of the arms and legs functioning in piston-like fashion. Any hesitation or acceleration whatsoever that disrupts the rhythm and timing in the approach can be the difference in success or failure.

Timing is undoubtedly the major culprit in the deterioration of a bowler’s skills. As a matter of fact, 70 to 80 percent of questions posed to me by slump-ridden bowlers are related to timing. Preciseness is the key to proper timing. Timing problems can stem from both early and late swings. In either case, both can be detrimental to effective bowling execution. Let’s examine the consequences of ideal swings, early swings, and late swings. An ideal swing is one that places the bowler’s release at an area where the thumb clears the ball approximately three or four inches behind the toe. Pete Weber best exemplifies this point in Figure #1.

What is an early swing?

An early swing is one where the release point is positioned beyond the most advantageous leverage area. The maximum leverage area is one that is initiated by clearing the thumb two – three inches prior to the shoulder/ankle point, then driving the ball into the lane in ...