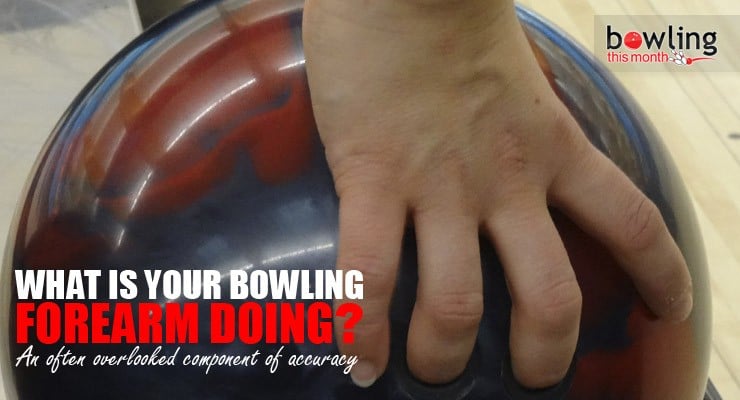 I need your help. I have been trying to think of a sport which involves either kicking a ball or hitting a ball or throwing a ball or rolling a ball in which the athlete does NOT have to follow through in some form or fashion to be successful.

Could you imagine a place kicker in football stopping his motion as soon as his foot hit the ball? (Short career as a kicker no doubt!) Most of the time, golfers must follow through with their stroke to get the result they desire. How about a boxer who stops his punch the instant he touches the opponent’s chin?

Remember back in the 2008 Olympics when Michael Phelps won a race by .01 of a second (really less) with his final reach? He won by the length of the tip of his finger nail. Boy, was that a follow through! We could go on and on about other sports and athletes but, suffice it to say, the follow through plays an important part in the success of most athletes. Bowlers of all ages ARE athletes.

Forearm position in the stance

If you are ever lucky enough to watch the great Diandra Asbaty, I recommend you pay close attention to her pre-shot routine. I feel it is one of the best in bowling since she never waivers, no matter the situation. Her pre-shot routine includes several practice swings (without the ball) where the inside of the bowling elbow seems to “rub” her right side and her bowling forearm is in motion directly along her target line and directly in line with the shoulder.

When she takes her stance, the elbow is directly under the shoulder and the forearm is along her target line. As she starts, the ball is placed on that target line and, as she finishes, the forearm and elbow are extended toward the target. What a pleasure to watch!

In the world of bowling there are all kinds of setups. I would like to discuss just a few. Some bowlers have both elbows away from the body (seen from the back view), which indicates the ball is near the center of the body (call this – elbows out to the sides). If the ball is in the center of the body and the shoulders are square to the foul line, the bowler is more than likely squeezing the ball between the two hands so there is pressure on both forearms. Therefore, the bowling forearm is really crossing in front of the body already, even before the motion has begun and there is likely a lot of tension in that forearm.

If you are one of those bowlers and question what I have stated, just look down when you are taking your stance to confirm the above. You will be surprised just how far across the body your bowling forearm is pointing (from the elbow to the wrist). Is that the angle where you want the forearm to be as you release the ball?

Starting the ball near the center of the body and shoulders being square to the line may cause the ball to swing to the outside on the backswing to avoid the hip. Then the ball is usually pulled to the inside. Sometimes, when you feel this happening, you may attempt to correct for it and pull the ball in behind the back and finish with the ball going outside of target. You can see that the position of the forearm in the stance can have a direct affect on the release and the position of that forearm at the finish.

There are bowlers who start with the bowling elbow pushed back so the BALL is very near the hip and the elbow is behind the shoulder (call this – bowling elbow back).  That way the non-bowling hand is helping to hold the ball from either the bottom of the ball or in front of the ball.

Using the non-bowling hand under the ball is a very good thing to allow the bowling hand and arm to be relieved of pressure. I feel when the ball is back behind the hip there is undue pressure on the shoulder joint which may cause physical problems over time. I would not recommend this to any senior unless you have been doing it for years and it is natural for you.

While the ball may be near the hip, the elbow could be slightly to the right or left of the shoulder. In that position, there is a possibility the elbow may not be placed in the same location on each shot so the forearm is at a different angle on each shot. That may affect the approach, armswing, and release. I feel it is imperative that the forearm be placed along the target line in the stance or at least at the first movement of the ball.

The third type of start I would like to cover is when the ball is held about chest level and both elbows are out in front of the hips. The elbows are not spread out as much as in my first example, and the spine is tilted slightly forward (call this – elbows forward). This places a lot of tension on the forearms and biceps, let alone the small of the back. The more there is tension in the arms, the less chance of a free armswing and smooth follow through. In this position, the forearm is still angled across the lane rather than down a target line. There may be the same issues as bowlers with elbows out.

We could go on and on, but let’s face it – there are as many starting positions as there are bowlers. Even in the ranks of the Pros, each has an individual set up from which they start their approach. Most of the PBA regular players AND most PBA Senior Tour (it is now known at PBA50) players have a starting position which includes the bowling forearm in line with their target line. No matter where they hold the ball, the first movement of the ball is along the target line which means the bowling forearm is along that line. Therefore, their swing and the projection of the ball out onto the lane are straight along their target line.

Does the forearm really matter?

There is a direct connection between the location of the bowling elbow, the position of the bowling ball, and the orientation of the forearm. Whenever I give lessons, one of the things I emphasize is the alignment of the forearm and elbow directly in line with the shoulder and all that is along the target line. I am a firm believer in the term KISS – Keep It Simple Schmid! (my play on words). The fewer movements involved to execute a successful shot the more repeatable that shot should become.

I say “should” since we all have a tendency to help the ball when things are not going exactly like we want. Trust in your ability and let it happen! I recommend that bowlers adopt a starting position which includes positioning the ball directly in front of the elbow and the elbow being directly under the shoulder.

That puts the elbow in the ribs or on the hip. That position is easy to repeat. This may cause the bowler to adjust how they stand – maybe putting one foot slightly further back than the other or maybe opening the bowling shoulder slightly. Doing this may simplify things as the bowler starts the approach.

I have stressed a lot about the position of the forearm in the stance. If the bowler allows the ball to swing the arm as the release is happening, that same forearm should be extended along the target line. What would follow is that the elbow also should go along that line. That extension is a key element to bowling success.

Let’s discuss the difference between reaching and extending at the finish. When a bowler reaches, the bowling shoulder moves forward of the hip and the non-bowling shoulder moves back, twisting the spine, which usually results in a very weak release and the ball missing the target. It is counterproductive to good leverage and accuracy.

Bowling is a feel sport. You must feel the free swing, feel the ball leaving your hand, and feel the smooth finish. Please use visualization to help with that feeling. I would like you to FEEL and see where the bowling forearm is in the stance. Then look at where it is at the finish. Actually look at where the forearm is as you are in the finish. You do not want to see the forearm cross in front of the face. That would indicate you are topping the ball or pulling the ball. Whenever it is your turn to bowl, always visualize the entire stance, approach, release, and follow through, which includes the line along which you are going to roll the ball.

Look at your own game from start to finish. If need be, have some video taken from the front so the entire set up can be seen and analyzed. Watch it from the back to see what the bowling forearm is doing during the approach and zoom in to see the all important finish. Set up well, let the ball swing the arm, and extend in a balanced position to complete a great shot. I hope this article has helped you with what I consider a very important part of the game and one that is often taken for granted.

Image credit: Hand / ball background image (©iStock.com/Nicki1982) is licensed for use by BTM and is the copyrighted property of its original creators.