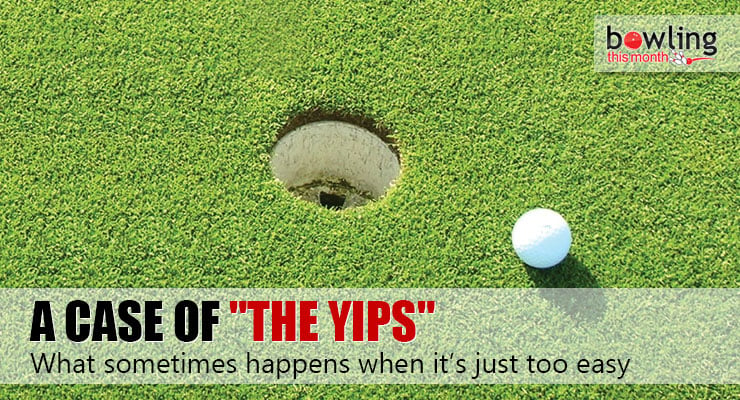 Generally this space is reserved for attention to peak performance in all aspects of the game. This month will be no exception, yet the way we are going to get there is through a back door. Everyone has “grabbed one” here and there in competition, and there is a term for it borrowed from golf, called “the yips”.

The yips is a phenomenon that happens when a skill that is supposed to be simple for an athlete is blown, generally the action is blown precisely because it is so simple. Examples of this are illustrated in sport after sport. In basketball, accomplished players clank and air-ball free throws. In baseball, a shortstop can’t make the throw to first base. In golf, putters blast two-foot putts across the entire putting green. In bowling, balls are strewn into the channel, single pins are missed by a mile, and the 1-3 pocket is whiffed by players who have the strike line dialed in.

“You live for moments like that. You don’t want it just given to you. You want to earn it.”
-Stefanie Nation, Champion of the PWBA Earl Anthony Memorial Tournament

This month we are going take a look at the bowling yips. It is perhaps against intuition to focus on something that we want to avoid. But it can happen to anyone so, best to be prepared, right?

We cannot get into the heads and minds of any players simply by watching them on television. So, in any of the following cases we don’t make the assumption that any particular mental process caused any particular result.

Even the giants can fall

That said, let’s look at a couple of possible examples. Last January Walter Ray Williams, Jr. faced Wayne Garber in the semi-finals of the PBA Red, White, and Blue championship. If you saw the match, there were many improbables in play. First of all you expect to see Walter Ray in this position; he has over forty titles. Wayne Garber is new to the Tour.

Although both have unique styles, Mr. Garber’s was developed out of multiple surgeries, including having both knees operated on simultaneously. He takes eleven steps, more or less, and comes to ...