Probably the most common question I receive from high school bowlers and their parents is, “Are there any hints or tips that will help in my goal to bowl at the collegiate level?” I typically respond with the obvious answers, including the fact that you must continually work on your game and practice, practice, practice. However, the adage that “practice makes perfect” is not necessarily correct, for if you have a weakness in your game or some troublesome bad habits, constant practice might just reinforce these problems and actually hinder your development and future success. Thus, in order to gain the maximum benefit from practice, you must change the adage to “perfect practice makes perfect.” This is where help and instruction from a qualified coach is a “must” in the learning and improving process.

Many centers and communities are blessed with knowledgeable coaches, and you should seek them out to formulate a perfect practice regimen. However, it is more likely that your center or home town community does not have a certified coach to help you. What can you do then? One option is to attend a nationally known bowling camp, and there are several to choose from. Staffed by coaching professionals, they can evaluate your game, strengthen your areas of weakness and provide practice techniques to use when you return to your home center. Bowling This Month has listed several camp options in previous issues. Notably, more and more camps are being started nationwide, but only one has been around for nearly two decades: the Dick Ritger Bowling Camps.

Earlier this spring, I was invited to attend the Dick Ritger Bowling Camp to be held in Minneapolis/St. Paul (Minnesota) in mid-July. The temptation was too strong to resist. Now that I have just returned from a week of instruction from Bob Rea and his traveling staff of coaching professionals, I wanted to share with our readers what you might expect to learn and gain from such an experience. First, a bit of background.

The camps were started nearly 20 years ago and are named after its founder, PBA and ABC Hall of Famer, Dick Ritger. During these years, the camps have instructed thousands of bowlers, of all abilities and ages, from all 50 states and several foreign countries. I only hoped that their record would have prepared them to meet the challenge of teaching this stubborn old writer, the true basis of success.

The headquarters of the camp is in Ithaca, New York where five-day programs are scheduled in June and July for both new campers and those repeat campers who have had the initial program in an earlier session. Each of the Ithaca classes is under the direction of Dick Ritger himself who is there each day to offer personal instruction for each student.

In addition to the camps in Ithaca, “satellite” camps were started in 1991 to meet the increasing demand of students from other areas in the country. Each of these camps is conducted in the same manner as the Ithaca camps and is led by head instructor, Bob Rea, whose bowling and coaching resume is similarly impressive.

The camps cater to bowlers of all abilities, and have a mix of men, women, and youth bowlers. Although the camp staff is quick to point out that the impressive claims of post-camp improvement come most often from the lower average players, it is also realistic for the 200+ average bowler to gain substantial insight into their game, seeing immediate and positive results by applying the “Ritger method.”

The Ritger method is designed to give each bowler a “feel” for the optimum way to approach and deliver a bowling ball with maximum results, using the basic style that the bowler has already developed naturally. The Ritger method does not try to change all players into clones of one another, but rather teaches them the fundamentals necessary to make their own unique style work for them. Essentially, the method isolates the approach and delivery into components, which are then enhanced through a series of specific drills and exercises so that the bowler will be able to deliver the ball in a consistent and fluid motion, time after time after time. OK, but “how” do they do this? Through hard work, repetition, and drills. Here is what happened at our camp, held July 14 to July 19.

I checked in at the center at 6:00 PM for a 7:00 PM start on Sunday, July 14th. Before we could put our ball on the lanes, a staff instructor personally examined the grip and fit of our equipment, and if it was not correct, you were given a pro shop slip to have the work completed before the Monday morning session. Luckily, I passed! 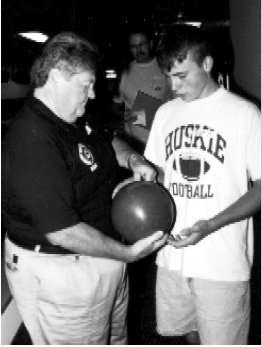 After a brief introduction of the 10 staff persons—nine instructors and one administrative person—the 52 campers were directed to the lanes at about 7:15 PM. We were asked to warm up on our own, and then we were given a folder with a number of handouts and information packets. After warming up, we were directed to a specific lane where head instructor, Bob Rea, watched us throw a few deliveries while he made a personal “chart” of our style and technique. This served as our individualized analysis chart for the week. Bob then directed us to lane number two where a video camera was set up to tape a delivery—our “before” camp delivery. On the last day of camp, an “after” camp video is made, and the differences were striking (Yes, the pun is intended!). We then completed a “goals” form, and our evening time was over—far too quickly. This was fun!

We returned on Monday morning at 9:30, ready to face the week. Bob first gave us an overview of the week, including what we as individuals might realistically expect to attain from the camp. About 15-20 percent of the time is spent in “lecture” settings, but the vast majority of the time is on-the-lanes.

Bob then introduced us to the first drill, the Kneel-Down Drill. For those who have not done this before, be forewarned that, although the stated purpose is to help the player develop a feel for the proper release and a free armswing, a hidden goal must be to torture all of us over 40 years of age! We old-timers quickly learned that, although a great and valuable tool, it is hard on our old knees! 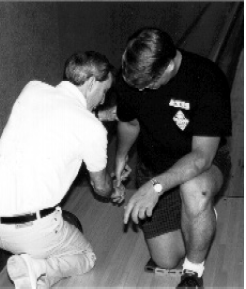 Drill number two was the Balance Line Drill, where we worked on balance at the foul line, and were introduced to the concept of “toe-knee-chin” alignment and balance. If I had a dollar for every time that the instructors said that phrase (toe-knee-chin) during the week, I could retire. But you know what, it works.

The third drill was the One Step Drill. Here you work on stance, balance, timing, and begin to develop a feel for the proper release and follow through needed to be consistent from one delivery to the next. Instructors worked with each camper to see that they were using the proper muscles and that they were starting to formulate a good grip and free swing. Many times we felt an instructor’s hand on our ...