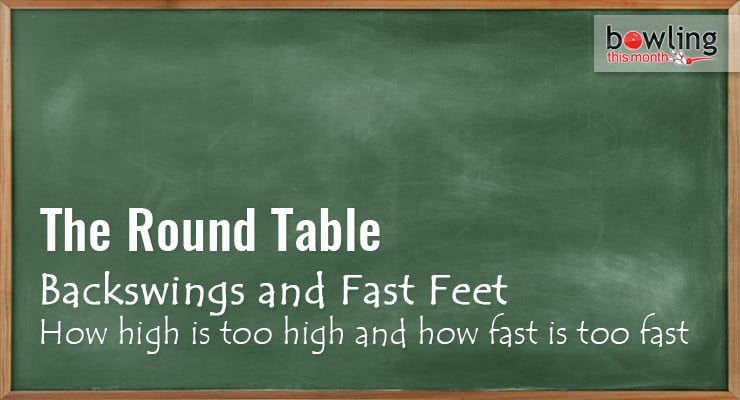 It’s still a busy time here in Reno during Nationals. Thanks to all the BTM readers who have stopped by to say hello or to take a lesson with me. This edition of the Round Table features questions that are easily two of my favorites to date.

The first topic of discussion addresses the height of a backswing and if there is an ideal or preferred height. The second question deals with the ever popular “fast feet” issue. This is a great topic and one that I deal with often while coaching. In my opinion, very rarely are fast feet the real issue. Many times one of the worst things you can do to your game is to consciously slow your feet down! Thankfully, we once again have a great panel of experts to help make sense out of and guide us through these two topics.

Editor’s note: The format of The Round Table column consists of posing technical questions submitted by readers to several top bowling coaches and educators and having them respond in “round-robin” style. 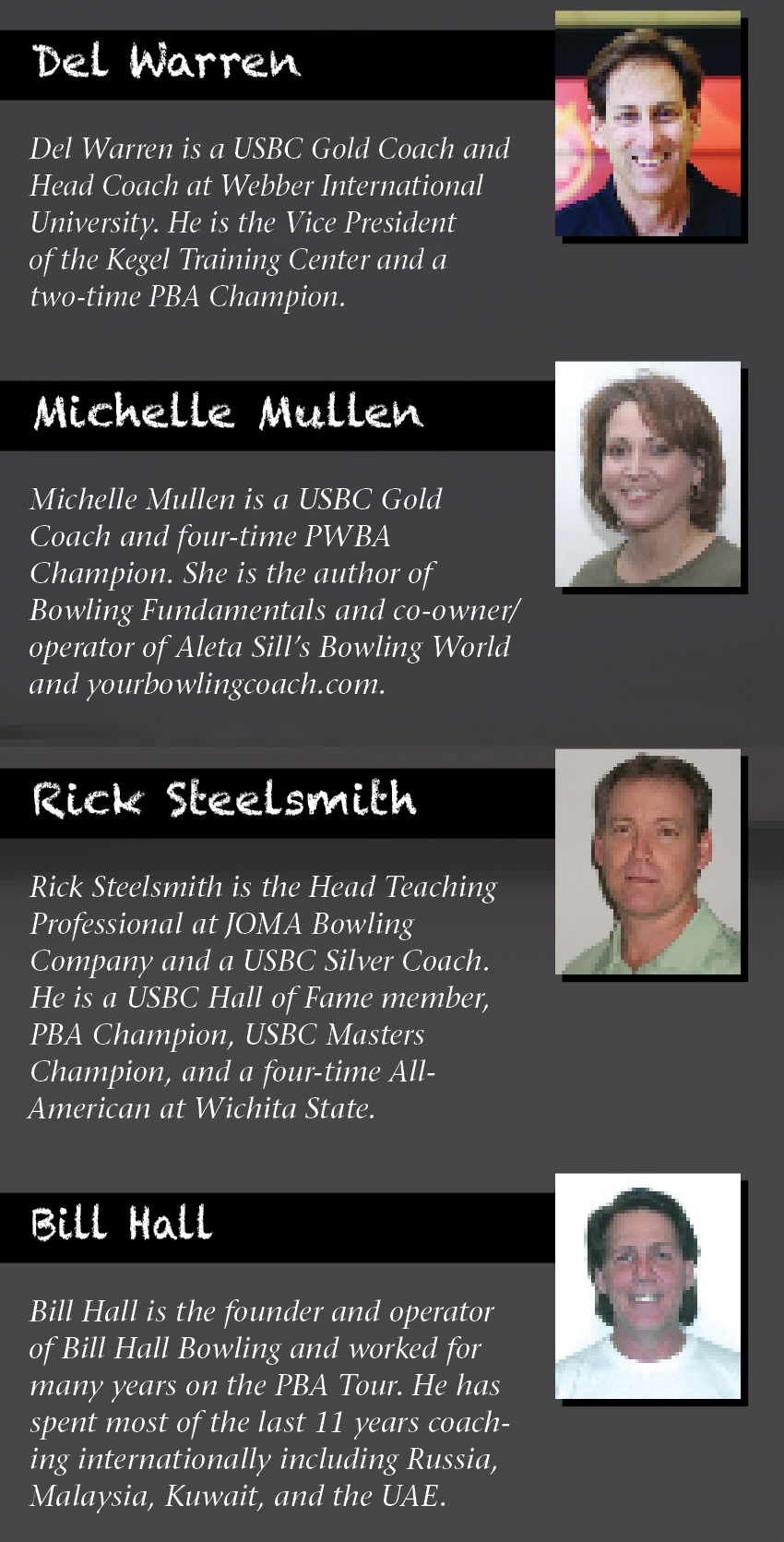 What is your opinion on the height of a bowler’s backswing? I see good and bad bowlers with both high and low swings. Is there a preferred or ideal backswing height?

Most of the best players today have a swing that is about a ball or a ball and half higher than parallel to the floor. The modern game demands higher speeds and a higher swing (with proper timing to accommodate that swing).

As far as the height itself, the swing needs to match the timing of the player. Timing is the sequencing of the feet, when the ball is put into motion, and the spacing of each step. Usually, the earlier the ball is placed into the swing, the higher the swing can go and still be in the proper timing window.

An indicator of a swing that is too high is when the ball bumps to the right (for a righthanded player) and the hand or thumb turns down. This is caused by the rotator being stressed beyond its natural flexion point. Besides injury, this can cause an array of problems for the bowler including deceleration, missing the target left or right, and inconsistent release points.

There is an array of reasons why a swing can be too low. One of the most common is the ball gets into the swing too late so that the arm does not have much time to complete a proper swing. Also, a grip that requires an excessive amount of grip pressure will prevent the bowler from being able to swing freely from the shoulder with little or no core rotation.

I would caution the reader to work with a certified coach to get an evaluation of your overall physical game.

When I am coaching, I look for the player’s natural swing. Once you push the ball out, I suggest using the weight of the ball and the momentum of the approach to allow the ball to swing. Stay relaxed to achieve your full range of motion, without using muscle to inhibit or increase the swing height. This will make your swing easy to repeat. While there are professionals who pull their swings back, it is hard to teach the average person how to do so consistently.

It is difficult to discuss swing height without respect to timing and leverage. It is important to have enough height in the backswing so that you are in the proper timing zone in the downswing entering your last step. For most, this is somewhere between belt to shoulder high, depending on a bowler’s release (higher for high rev players and lower for strokers). When player’s have earlier timing in the start, it may be necessary to have a higher backswing to have enough time to get into the correct position for good leverage at the line.

A bowler’s flexibility and range of motion at the shoulder will naturally influence the size of the potential swing arc. Swings heights also vary due to the amount of spinal tilt a player has as the ball reaches the backswing. The more tilt, the higher the swing tends to be.

Flexibility, timing, and the ability to relax all influence a player’s swing height. In the end, the looser and more natural the swing, the easier it is to repeat.

I don’t know that there is an ideal backswing height, as many factors can play a part in what a particular bowler may be able to achieve. I can say that in today’s game with modern equipment designed to flare and hook a great deal, a somewhat higher backswing is desirable.

This can be advantageous due to the faster ball speed it tends to achieve, but it is not a necessity. Ultimately, a backswing that tops out with the bowler’s arm reaching slightly above parallel (center to bottom of ball lining up with top of the head) would probably be ideal, flexibility permitting.

If a backswing gets too high (an extreme angle of the arm to the spine), the bowler may risk injury over time. If a backswing is too low, it generally forces the bowler to use muscle or force in the swing to produce effective ball speed, which can cause inconsistencies in the delivery of the ball.

Getting the ball in the proper timing sequence or window, combined with a natural swing tempo, will allow a bowler to more easily achieve a backswing height (arm slightly above parallel at the top) that produces a free swing and a firm ball speed. As always, seeking a qualified coach, preferably one who uses video, to discuss and help you with this is recommended.

Swing height is really based on the player’s ability to repeat that height. The main thing is that the height of the swing reaches its peak at the proper time and that the bowler achieves that swing length/height with a flowing motion instead of manipulating the swing to reach an artificial peak.

The proper time for the peak of the swing is when the weight of the body is completely on the leg during the next-to-last step (whether four or five steps) and the toe of the third step (five-step delivery) is the only part of the foot touching the approach.

Most quality players are able to reach a peak or height of a swing with little to no effort. The swings that are manipulated to reach a length/height are the swings that, in my opinion, are much harder for a player to count on day to day, with most manipulated swings involving pulling the ball back and up to create the height. This type of manipulation usually creates an inconsistent release at the bottom of the swing causing the bowler to either drop the ball or release the ball too far out in front of them.

I’m a 200+ average bowler who has always has very fast feet in my approach. I’m constantly told to slow my feet down but when I do it doesn’t feel right and I tend to make even more bad shots. Is having fast feet a problem and if so, do you have any suggestions on how to effectively slow them down?

Having fast feet is not bad. Today’s game demands a good overall rhythm and tempo that is produced by sequencing the ball placement and footwork together so that the overall physical motion looks effortless and efficient.

This idea produces the most energy with the least amount of effort. That being said, the rhythm and tempo of the player is very individual and really has to do more with the unique makeup of the player. The great Marshall Holman comes to mind as a player with quicker rhythm and faster feet. He is smaller in size and had a short swing by today’s standards. Chris Barnes is taller and has much slower feet and rhythm.

As far as slowing your feet down, check your back angle to make sure you are not leaning forward as the ball gets into motion. Stand a little bit taller throughout the approach and think of going slower with your rhythm and tempo especially as you place the ball into the swing. You should see a difference immediately. This advice is generic. It’s tough to totally answer without seeing video. Good luck!

In most all instances, the rhythm of the footwork is dictated by the speed of the swing. That is, when the swing is early or if it accelerates too fast from pulling the ball to the backswing, the feet are forced to catch up to try to stay in time. This is why your attempts to slow your feet down do not work and make your timing even worse!

So, yes, because this indicates a swing/timing problem, you do want to fix the issue. Once you address the swing, timing it properly in the start and getting it to relax, your foot speed will naturally adjust.

Keep in mind, your new rhythm will feel like molasses, compared to your quick feet. It will take getting used to. It does not mean you are too slow; it simply proves you are fixing your swing and timing, leading to calmer footwork. In fact, if you are not feeling this, you are not fixing the problem!

Fixing fast feet is not about trying to slow down, rather, it is about having a good swing and timing it properly to able to walk more naturally. By focusing on your swing, you will fix the real problem, leading to a better rhythm in your footwork that was unachievable by working on the footwork itself!

We’ve all been told at one time or another to slow down our feet. The fact is faster footwork in general is actually desirable. Most elite players tend to have a fairly quick cadence with their steps. Most get the ball into the swing earlier in the timing window than the average player and slightly chase the swing with their footwork. The increased forward momentum generated by footwork with a quick tempo is the more efficient way to produce firm ball speed. Proper footwork tempo should feel slightly quick or athletic and give the bowler a smooth, manageable cadence to the line.

We really don’t want the footwork to feel slow, over-deliberate, or robotic. Footwork that is too slow can hinder forward momentum to the line, forcing the bowler to use a more muscled armswing to produce firm ball speed. Conversely, footwork that gets too quick can reduce a player’s ability to maintain balance through the release and into the finish which, in turn, can cause  inconsistencies resulting in bad shots. Many times when the feet are way too quick, it is a result of getting the ball into the swing too quickly for your backswing height, causing the feet to go quickly to catch up to the swing. Blending the proper timing with a footwork rhythm or tempo that is slightly on the quick side will help to produce a more smooth, fluid, and efficient armswing, leading to more consistent shotmaking.

There are many opinions about the speed of the feet. I have seen every type of foot speed work, but there are caveats that go with having your personal foot speed.

Mike Jasnau is a Teaching Pro / CATS Instructor at the National Bowling Stadium in Reno, NV. He is a PBA Champion, USBC Silver Level Coach, and Storm Instructional Staff Member.