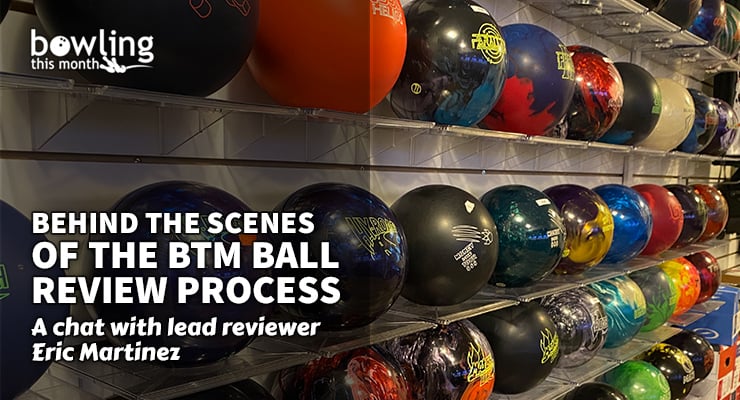 Bowling This Month’s ball reviews are often acknowledged to be some of the most thorough and objective in the business. While readers can learn more about our overall ball review process here, we thought we’d pull back the curtain a bit more and chat with our lead reviewer, Eric Martinez.

Eric is the owner of University Pro Shop in New Braunfels, Texas. He’s a member of the Vise Inserts staff and he has worked in the bowling pro shop industry all his life. He has had the privilege of working with and learning from several big names in the industry to better understand layouts, surface preparation, coverstock formulations, and ball motion. His experience in these areas helps him both as a pro shop operator and as the lead reviewer for Bowling This Month.

Eric plays a vital role in our overall ball testing and reviewing process, as he drills all of the test balls, schedules and coordinates the testing sessions, manages and documents each test, writes the reviews, and serves as our Cranker tester, among countless other behind-the-scenes tasks. We recently asked Eric some of the most common questions we receive about our process in order to gain a few insights and to share some of the details that usually don’t get mentioned in the reviews of each individual ball.

(Please note that our questions appear below in bold italics and Eric’s answers appear in standard typeface.)

Why are the testers’ layouts all different?

This is one of those things about our process that is simply a continuation of what has always been done. Before I became involved in the testing, the Tweener tester was given a stronger layout due to him having a higher ball speed than Stroker. Cranker was given a slightly weaker layout because, otherwise, it would be too much hook for him to give a proper review of the ball.

Each tester has a standard layout that is used on each of their test balls. (Note that prior to August 2020, Stroker and Tweener had small balance holes below their PAPs on the VAL.)

Using these layouts, we know that, for example, if a ball provides a lot of angle for Stroker or Cranker, the ball is very skid/flip in its design. These layouts also allow the testers to play to their strengths. Stroker’s layout lets him stay straighter with his angles and doesn’t overreact to the dry. Tweener’s layout allows him to use his higher ball speed without shooting the ball past the breakpoint on a regular basis. Cranker’s layout cuts down on the flare potential, helping him blend out the motion at the back end.

It’s important to note that, prior to the USBC’s ban on balance holes that started in August 2020, Stroker and Tweener used small balance holes in their layouts. We noticed very little difference in ball reaction as a result of eliminating the balance holes.

Even though they’re not used in testing, are there other layouts that the testers like to use on their league or tournament equipment?

In drilling extra balls for tournaments, Stroker uses a pin-up layout of 55 x 4-4.5″ x 25 for more length and more downlane angle when he needs it.

For the most part, Tweener only uses his testing layout. He doesn’t drill many extra bowling balls. Once in ...