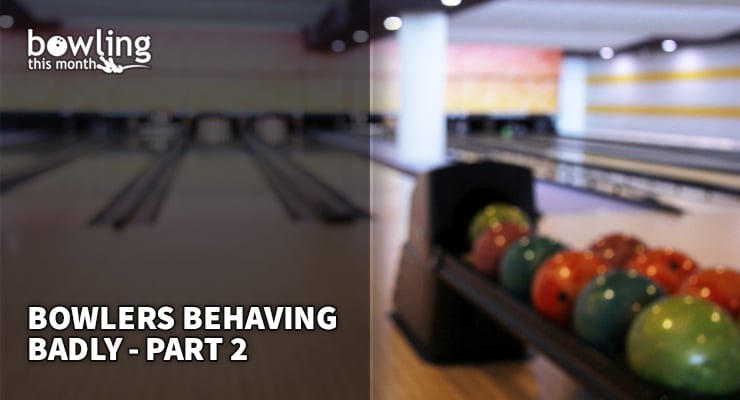 In the first installment of Bowlers Behaving Badly, we discussed not “giving five,” impatient bowler syndrome, slamming the ball on the rack and the lane, making noises while a bowler is in the middle of his or her approach, and trash-talking. Fasten your seatbelts, because we’ve just scratched the surface of such behaviors.

This time, we’ll be looking at some topics that really get under people’s skin, including lane pattern manipulation, ball surface changes, sandbagging, and mid-game bowler withdrawal. Let’s get started!

This is—or could be—a touchy subject, so let’s talk about it. USBC Rule 18 states the following:

While bowling in USBC competition, a bowling ball cannot have the surface altered by use of an abrasive.

For the league bowlers, the takeaway is simply this: until any league bowlers rolls the very first ball in a league session, it’s perfectly fine for me to scuff up/dull, or polish/shine the surface of any ball I wish or plan to use during that league session. Once that first competition ball has been rolled, all ball surface changes are frozen and illegal.

So, nothing in the USBC rules prohibits a bowler from intentionally using what is referred to as “charcoal” (a solid coverstock ball with lots of surface—say, 500 grit or lower) to burn a hole in the pattern, or to use urethane to purposely create carrydown. Granted, it’s a bit extreme to do this for a house shot league, and you won’t often see this being intentionally done. However, if a bowler chooses to do so, it’s perfectly legal.

Here, we are going to look at both the concept of intent as well as the ultimate goal of the behavior. Is the bowler’s goal to carve a line beneficial to him or herself, or is the bowler’s goal to simply ruin your line? Both instances carry intent, but the goal of creating a good line or “look” for yourself is considered sportsmanship, because you are ...

Image credit: Bowling center image (©iStock.com/Fate_30825) is licensed for use by BTM and is the copyrighted property of its original creator.