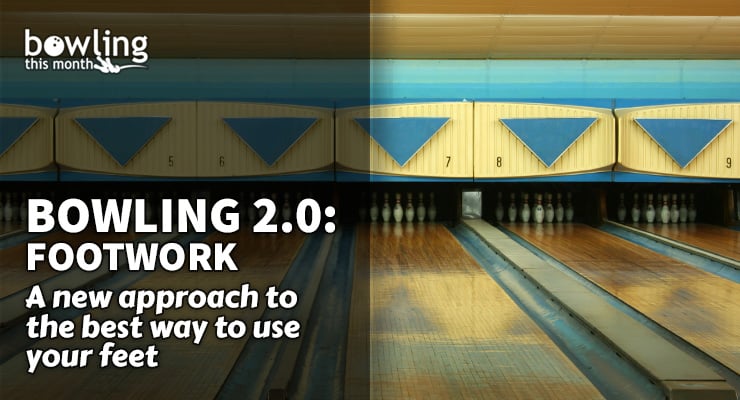 Now that we have discussed the swing and timing, let’s move on to footwork. If we think of timing as the synchronization of the swing and the footwork, it becomes clear that the tempo of the steps is very important, as well as their direction to allow a straight swing.

For the purpose of this article, we’ll focus on the modern game’s footwork tempo and direction, and introduce the concept of Everything Towards the Target (ETT). Some of the “truisms” about how we walk and compensate in the swing are simply not the best way to learn the game, especially when we consider the importance of a straight swing.

(Editor’s note: the images below are from European Tenpin Bowling Federation (ETBF) training materials and are used with permission.)

As it is virtually impossible to discuss direction and tempo independently of one another, we’ll present each step of the modern five-step approach and address both elements. Where necessary, we’ll also tie this into the appropriate synchronization with the swing for correct timing.

It is best to visualize the approach as following three channels: one for the swing, one for the right foot, and one for the left foot. In the stance, the ball and right foot are in the swing channel, while the left foot is in the middle channel. Note that the images and discussion will feature a righthanded bowler, so flip it if you are a lefthander.

The first step of the approach should be a heel-toe step, rather than a shuffle. We want this step to be a steady support. It should be straight and very slow. As I mentioned in my timing article, the slower the first two steps, the easier it is to achieve the right timing as we synchronize the ball movement.

A word of caution: a first step that is too long will open your hips too much too early, which creates the danger of overrotation later in the swing.

The second step is often referred to as the crossover step, which I disagree with as far as a description. When you cross your legs, one leg goes completely over the other. The second step does not cross over; rather, it goes directly in front of the first step. It’s all about the visuals you are creating in your mind, and ...