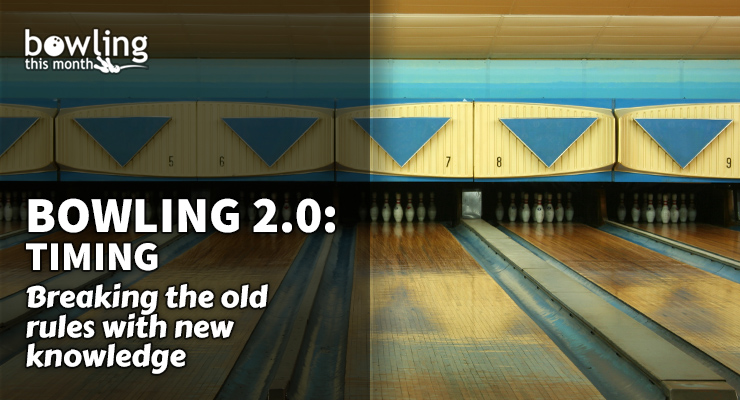 Now that we’ve examined the all-important swing, it’s time to take a look at timing. At its most basic, timing is the relationship between the ball position and the feet, which can either help or hinder a bowler’s biomechanical efficiency. In studying the modern game, we notice two fairly obvious differences compared to the classic style: higher backswings and more body rotation. The root of both these differences is related to timing.

Creating body rotation depends on a specific sequence and ball position relative to the feet early on in the approach. As the ball passes the body while transitioning from the swing start and into the backswing, a righthanded bowler must be taking a left foot step. When walking, our hips open and close with each step. In bowling terms, the hips are open (for a righthander) with every left-foot step and closed with every right foot step. For the body to open up, the hips must also be open, so this timing is the basis of the modern bowling game’s mechanics.

This isn’t to say that there aren’t other important timing points. As I mentioned in my introduction to this series, there are three timing points and three checkpoints that we use to evaluate and adjust timing. I’ll discuss all of them. The most widely-known timing point in North America is the release timing, when the ball passes the ankle at the release point. Research has shown two things about this timing point:

With all this in mind, let me introduce a few key points to remember as we go through. First, I will be referring to optimal timing, late timing, and early timing when discussing each of the timing points. Second, the baseline approach being discussed is the five-step approach, not the four-step. We’ll discuss more on that in the upcoming footwork article, but stating these two important items allows us all to start this article on the correct foot, so to speak.