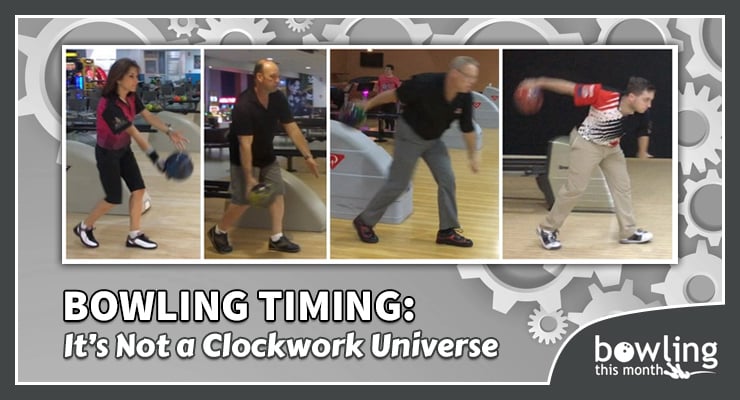 When Sir Isaac Newton wrote Mathematical Principles of Natural Philosophy in 1687, he presented to the world his three laws of motion and his principle of universal gravitation. With this breakthrough in the understanding of motion, Newton also inadvertently introduced the concept of the “clockwork universe,” which theorized the universe as something that unfolded according to mathematical laws with all the precision and inevitability of a well-made clock. This is known as a deterministic view of the universe, and it would be an ideal outcome in the world of tenpin bowling technique.

Unfortunately for us, though, bowlers are also governed by the laws of chaos theory, and the expected predictable outcomes aren’t always achieved. This article examines timing as a function of the relationship between the ball and the feet, discusses why having some leverage at the line is useful (and how to get it), and explores how to overcome chaos theory to produce more predictable results on the lanes.

Bowling timing is essentially the relationship between where your feet are and where the ball is at any given time during the swing. The swing begins with the first movement of the ball (which typically coincides with the start of the final four steps of the approach) and it concludes when the slide has stopped, as these are two distinct instances that are clearly defined and are easy to measure. As you assume a starting position and prepare to commence your swing, both your feet and the ball are at rest. Once movement is initiated, the speed and height of the swing and the pace of your footwork will determine the timing relationship.

And why is good timing important? Good timing allows you to repeat your shot, it creates time for your release, it helps generate a consistent ball speed and power with less effort, and ultimately it creates a more predictable ball roll from shot to shot.

When I examine the timing relationship between the ball and the feet, I focus on where the ball is when the bowler transfers their weight as they take each step. This coincides with when their other foot is about to leave approach. There is no precise moment for this, but, as you will see in the following examples, the positioning of the feet is very similar for each of our four bowlers at each position that is analyzed.

The following timing analysis is based on a five-step approach, as this is the most common number of steps that I encounter. If you use a four-step approach, start from the second step below. And, if you take more than five steps, adjust accordingly. For each step, I am using examples of four bowlers with different timing to highlight where things can differ as the swing progresses.

I want to thank our four example bowlers—Mary, Michael, Jason, and Chris—for the use of their footage in this article.

In the setup, both the ball and the feet are at rest. 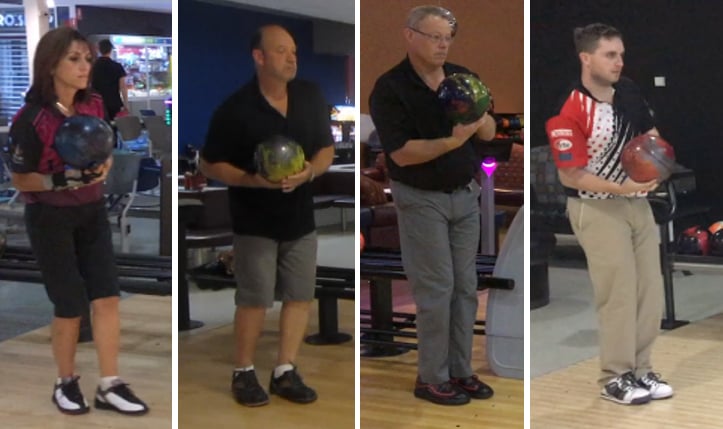 The setup (left to right: Mary, Michael, Jason, and Chris)

In a five-step approach, the ball doesn’t move during the first step. The ball will move forward with the bowler, of course, but there should be minimal movement of the bowling arm with respect to the body. 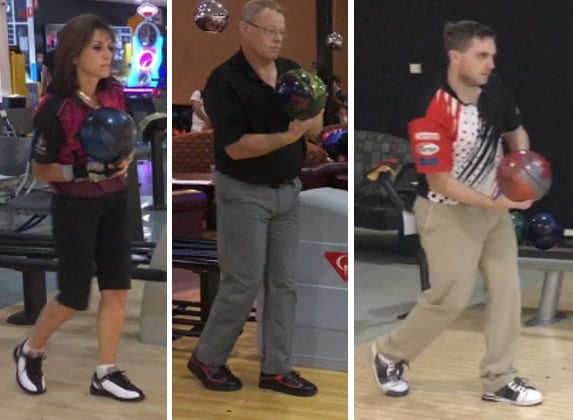 The first step (left to right: Mary, Jason, and Chris; note that Michael uses a four-step approach, so he is omitted in this image)

In the second step, the ball moves forward and down into the swing so that when the weight transfers to the right foot, the ball is in motion and the swing is initiated. Note here that, as a four-step bowler, this is Michael’s first step. Also, note how Chris ...