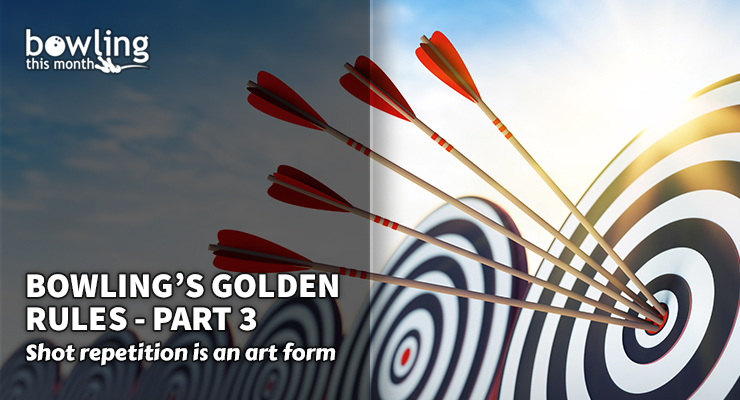 In the two previous articles, we’ve discussed the importance of having a good fit to your bowling ball and what makes good ball motion, as well as its effect on your potential to score. Now let’s move on to bowling’s third golden rule: shot repetition is an art form.

We’ll start by defining this statement, take a look at what may be holding you back, and give you some suggestions for improving your shot repetition. Finally, we’ll look at the constants and variables in our sport, as they relate to your shotmaking.

The art of shot repetition

Repeatability is the most important element to being successful in any sport, not just bowling. Let’s define it as the combination of every physical and mental aspect of your training culminating to that one final explosive action. In the game of bowling, we have to do that each and every time we deliver the ball onto the lane.

Its more than just a skill. An athletic skill is defined as an action or process that has been learned by trial and error, possibly over many hours of repetition. It used to be called “muscle memory,” but that term is a bit of a misnomer.

Without going too deeply into the topic, we now know that “muscle memory” is actually the repetitive process of using the same neural pathways to speed up our ability to repeat an action without having to consciously think of it. So, it’s more of a neural memory than a muscle memory. Repetition creates a substance in the brain called myelin that wraps around the neural pathway like an insulating wire, allowing you to do specific tasks faster than others whose neural pathways aren’t wrapped in myelin.

I prefer to use the term “automatic system.” The movements would become almost totally instinctive, based on feeling, and this is also why I would define it as an art form.

What do you feel?

Another language hurdle is the concept of “feel.” Bowlers must be able to separate what they feel emotionally from what they feel through the body sensation of that action, which is known as kinesthetics.

For example, a shot that feels “awful” is an emotional response, not the kinesthetic sensation of what the body ...

Image credit: Archery targeting illustration (©iStock.com/peterschreiber.media) is licensed for use by BTM and is the copyrighted property of its original creator.