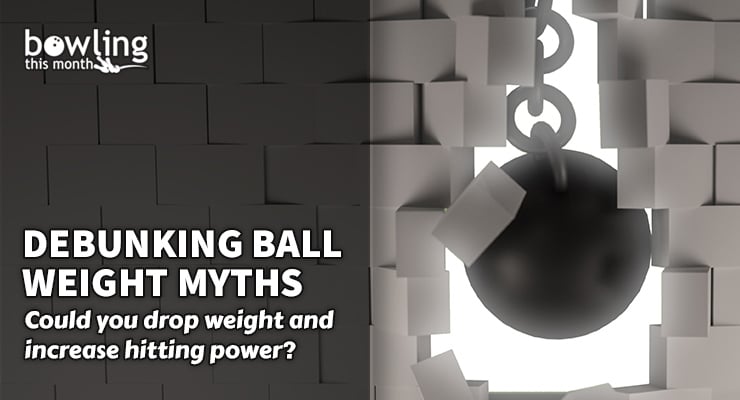 Whenever I have a discussion about ball weight with a bowler, I think of Leonard Thieman. At the age of 76, I asked him if he thought he should give up using 16-pound equipment and switch to 15-pound balls. His response was a classic: “If I do that, what am I going to use when I get old?”

In this article, we’ll explore some of the commonly held beliefs regarding ball weight, and why most of these are misconceptions. It wasn’t all that long ago that 16 pounds was the standard for male bowlers. Not only was it standard, but there was also a sort of stigma toward anyone using 15 pounds or less. But the question is, with today’s modern cores and coverstocks, does the old adage hold true that 16 pounds will hit harder than 15 pounds?

The goal of this article is not to convince you (or Leonard) to give up using 16 pounds. Instead, the goal is to help you better understand both physics of the subject and the implications of lighter ball weight and real-world applications for bowlers. Before continuing, I’d like to give special thanks to Rod Ross and Jorge Fernandez for their collaboration on this article.

The common idea behind using the heaviest ball possible is that more mass equals more impact at the pins. More impact and less deflection mean better pin carry and more strikes. But is this true?

Ernesto Avila is a professional bowling coach who is currently the Head Coach of the Peru national team. He is a Panam Bowling Master Coach, a USBC Silver Coach, and an ETBF Level 3 Coach.

Image credit: Wrecking ball illustration (©iStock.com/homeworks255) is licensed for use by BTM and is the copyrighted property of its original creator.