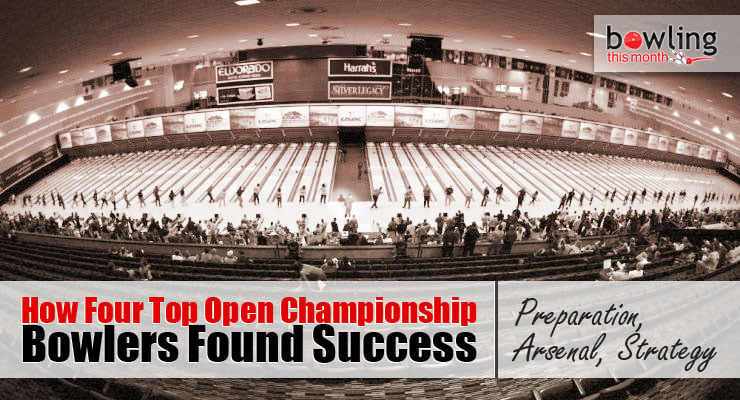 The USBC Open Championships have been contested for more than 100 years and a title at the world’s largest participatory sporting event is among the most coveted in the bowling.

Each year, more than 65,000 bowlers compete in singles, doubles, and team competition for a shot at an Eagle – the trophy awarded to tournament champions – and part of the total prize fund of more than $5 million. Months before heading to the tournament, many bowlers will collect information, analyze and practice on the tournament lane condition, prepare equipment, and determine how to attack the lanes as a team.

The 2010 event at the National Bowling Stadium in Reno had its share of exciting moments and memorable performances. Four bowlers who made headlines in 2010 agreed to share their personal keys to success. All four bowlers were asked a series of questions about how they found their way to the top of the standings.

MATT McNIEL
Chanhassen MN Age: 25 LH
In his fourth Open Championships appearance, McNiel had 88 clean frames and claimed the 2010 Regular All Events title with a record score of 2326 (806 in singles, 780 in team and 740 in doubles). McNiel also finished fifth in singles in 2010.

ERIK VERMILYEA
Mansfield TX Age: 27 RH
Vermilyea’s 758 series helped him and Jeffrey Mersch to a second place finish in Regular Doubles with 1507. Vermilyea’s doubles success continued at the nearby Storm Bowlers Journal Championships presented by USBC, where he teamed with PBA exempt player Anthony LaCaze to claim the Open Doubles title with a 1972 four-game total. Vermilyea, a former Team USA member, finished his 2010 Open campaign with 694 in team and 652 in singles for a career-high 2104 all events total. In six trips to the tournament, he has broken the 2000 barrier four times for a 222.35 average.
BRETT WOLFE
Scottsdale AZ Age: 34 LH
Wolfe is the two- and three-year average leader at the Open Championships with 244 and 234.96, respectively. He finished second to McNiel in Regular All Events at the 2010 Championships with a 2245 total, which included 771 in team, 759 in doubles, and 715 in singles. He was seventh in Regular All Events in 2009 with 2147. His career average at the Open is 211.9 (ten years). He also won the 2002 USBC Masters.

How do you prepare for the event mentally and physically, on and off the lanes?

McNiel: As an amateur, the USBC is the big one you look forward to the whole year. The megabucks events are good but they just don’t have the same prestige as the USBC Open.

When it comes to preparing physically, I will make sure the month leading up to the tournament I’m getting in at least 10-15 games of practice each week and really practice – go out there to get sharp and work ...