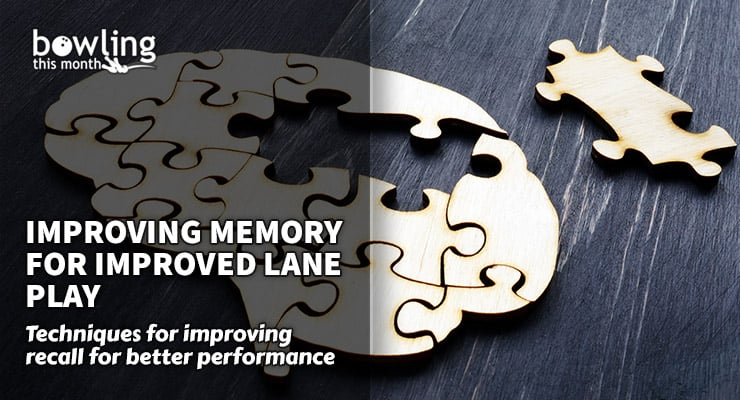 Elite competitors have world-class memory and sport-specific pattern recognition. A University College London study, commissioned by Dunlop, found that elite athletes have memory prowess that is 20 percent better than average (Walsh, 2015). The same UCL study revealed that elite athletes have 10 percent faster brain processing under stress. In fact, the elite athletes in this study improved their memory accuracy by 20 percent more than non-athletes when under stress. In a study of elite soccer players, Evans et al. (2012) found that adult elite players could articulate more content and details of their thought processes during game situations compared to elite youth soccer players.

One of the most important skills for success in bowling competition is proficient lane play memory. Lane play memory involves recalling what you did on your last shot on each lane, lane transition trends you have experienced in previous squads, as well as the implementation of a revised lane play plan. The more you know about lane transition, equipment, and topography, the more you will realize how important your memory is for maximizing lane play performance. I have worked with elite bowlers who can actually recall frame-by-frame lane play decisions and the subsequent ball motion change that resulted from these decisions, as well as what they would have done differently next time if the decision didn’t work.

Intermediate-level bowlers often see a pair of lanes as a single unit rather than two independent lanes. Accordingly, they often expect the lanes on a pair to play similarly, leading to ineffective lane play decisions. This perception is restrictive, as it can foster a belief that an adjustment on the left lane will also work on the right, which is often not the case. Elite bowlers play each lane as a single unit, effectively doubling the tactical work ...

Image credit: Brain puzzle image (©iStock.com/designer491) is licensed for use by BTM and is the copyrighted property of its original creator.