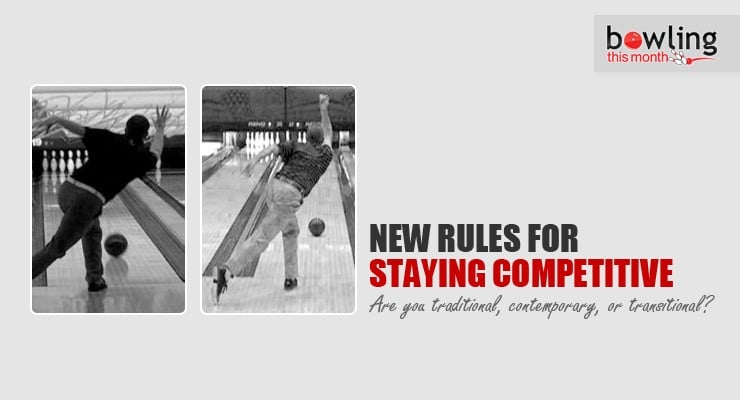 Today’s high average bowlers use one of three distinctive styles based upon what they learned, when they learned it, and how hard they were willing to work at it.

Traditional bowlers who learned to bowl prior to the advent of urethane bowling balls in the early 80s and reactive resin in the early 90s, were taught to use a style designed to feature accuracy and some hook using equipment that did not lend itself to hooking – the bowler had to make it hook. These bowlers can be found in most every scratch house shot league where many average in excess of 220 as long as they can play at, or very near, the second arrow.

Contemporary bowlers learned to bowl after the introduction of reactive resin. They learned to utilize the ball’s built-in response to lane friction to impart tremendous power and revolutions. The best of these bowlers can be found on the PBA Exempt Tour. They include such notables as Tommy Jones, Wes Malott, and Michael Fagan.

The contemporary style is exemplified by Las Vegas power-player, Adam Ishman. Note the follow through hand position, with the palm facing the pins, after his hand has rotated around and through the ball at release.

The third style includes bowlers who learned to bowl in the pre-resin era and have adapted their games to accommodate modern equipment and lane conditions. These Transitional bowlers include Chris Barnes, Pete Weber, and Norm Duke, among others. Note there are no bowlers on the PBA Exempt Tour or among the point leaders on the Senior or Regional Tours, who have not adapted their traditional games to some degree to modern equipment and lane conditions.

The thing that makes transitional bowlers notable is that they have been able to set aside many of the methods they were taught and adopt new styles that let them stay competitive. Let’s take a look at some of the more traditional methods.

Traditional bowling style taught us that the shoulders should remain as level as possible throughout the approach and delivery. I’m sure many of you can remember admonitions telling you not to drop your shoulder. No more. Just take a look at Chris Barnes, for example. He sets up with his right shoulder lower than the left and it stays lower throughout his approach and follow through. The lower bowling shoulder is imperative for a modern, powerful release. This is true for virtually every contemporary bowler on the planet.

Another fundamental change in modern bowling posture has to do with spine tilt. Traditionally, bowlers were taught to keep the spine in a vertical position as much as possible ...