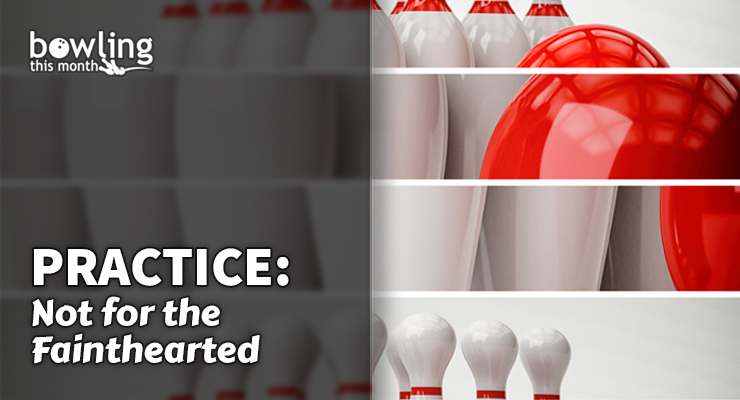 Practice is an essential element of bowling. No news there. But practice won’t be much help if it isn’t done properly.

“Properly” is an interesting word, but what does it mean to a bowler? It means knowing what you need to work on before you start working on it. Now, that’s a pretty circular sentence, but all it says is: don’t guess. Don’t just randomly pick some part of your game to work on unless you’re certain it needs work. For example, why say, “Today, I’m going to work on my pushaway!” unless you have reason to think it needs your attention?

Real practice is all about GPA: set Goals, develop a Plan, take Action. But how do you decide exactly what goals to pursue? Start by answering one question: are you 100% satisfied with your game? The answer: of course you aren’t; you wouldn’t be reading Bowling This Month if you were. OK, so if you’re struggling but don’t know why, then obviously your first priority is to find out what’s wrong. And how do you do that? According to Gene Bruihl, there’s one sure-fire way to find out: video.

Bruihl is a six-time PBA Regional champion, with 76 perfect games and a couple of dozen 800+ series to his credit, so he knows what he’s talking about. Besides operating a bustling pro shop in Danville, CA, Bruihl also coaches. When he teaches, his focus is on identifying each student’s particular problem areas. His main coaching aid? Video.

“Without video,” Bruihl says, “it’s too hard to truly feel what you’re doing (because) what you ‘feel’ and what really happened mechanically are rarely the same.” Besides using the camera when he coaches, Bruihl wants his students to use video when they’re practicing without him standing nearby. He reminds them that he can’t be present to see every shot they throw, and tells them to “…use your time efficiently by using technology—video—to help your technique.”

Good point. For instance, maybe you think you have a nice, straight armswing. But imagine how you’ll feel when video shows you swinging the ball away from your body in your backswing, then trying to pull it back in line at release. Eureka! Now you have something to work on.

How do other pros practice? In speaking to several other top bowlers, one theme emerged: focus.

Michael Tang is one of bowling’s young guns. In 2006, at the tender age of 10, he became the youngest bowler to record a USBC-sanctioned 300 game. Earlier this year, he showed that his star is still rising, as evidenced by the nationally-televised USBC Masters match he bowled against none other than his older brother and fellow rising star, Darren. (Michael prevailed in that one, 248 to 212. He eventually finished in ...

Image credit: Bowling ball / pins background image (©iStock.com/Piotr_roae) is licensed for use by BTM and is the copyrighted property of its original creator.