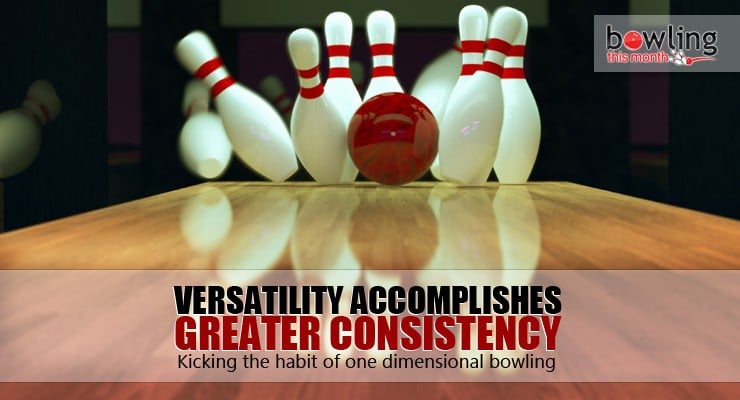 Versatile, according to Webster’s Dictionary, is multifaceted and adaptable. In the bowling world, it is a term reserved for players who have the innate ability to conform to any and all lane conditions. It sets apart stars from average bowlers and is the principal ingredient for the overwhelming success of such PBA players as Chris Barnes, Parker Bohn, Norm Duke, Pete Weber, and Walter Ray Williams, all of whom have placed themselves on a high plateau in professional bowling.

What they have in common

What do they have in common? Although they perform in their own individual and inimitable fashion, they have managed to maintain consistency. Consistency is the retention of form and the undeviating steady method of execution that, day in and day out, permits a bowler to perform like clockwork.

Far too many youngsters have become obsessed with the power game. They revel in maximizing revolutions on the ball. They favor splattering pins in all directions on light hits rather than opting for a simpler, more stable game; that is, sacrificing excessive power for controllable shots with proper direction. Generally speaking, most power bowlers have been reduced to one-dimensional players who encounter difficulty when lane conditions are not conducive to booming strike shots.

The PBA roster is replete with players of this type. Respectfully, they shall remain nameless. The number of titles of those who rely on the power game displays the ineptitude of this style when those records are compared to the records of players who display versatility.

Versatility in bowling execution is the ability to overcome diverse lane conditions by altering hand positions and speed control. Those weapons constitute the principle ingredients for determining the ball’s path to the pocket. Bowling manuals, instructional books, astute coaches, and competent instructors are all in agreement with this viewpoint. I venture to say that most mentors in the bowling game subscribe to the philosophy that any ball delivered with sufficient revolutions to carry out the 5 pin will generally record strikes.

With this in mind, excessive revolutions, far more difficult to manage, can be regarded as overkill. This is not intended to degrade, belittle, or minimize the advantages of arcing hooks that enter the pins from deeper angles, and in doing so, create wider pockets. Nevertheless, statistics speak for themselves and records reveal, beyond doubt, that “straighter is greater.”

Perhaps straighter is misleading. I do not recommend delivering a bowling ball in a STRAIGHT line but I strongly suggest projecting the ball away from the pocket in a manner that minimizes the degree for better command. The advantage in this method of bowling execution can be evidenced by the 150 plus titles accumulated by the aforementioned superstars.

With possible exceptions, these players can all be classified as strokers, rather than power players. Although Pete Weber delivers one of the most potent strike balls in the game, he cannot be categorized as a power bowler. Weber has mastered his high rev, wide hooking shot due to his soft, effortless execution and incredible release. He is the epitome of a POWER STROKER.

How do you distinguish a power bowler from power stroker? Webster describes stroke as gentle and soothing, two words that set Pete Weber apart from bowlers who apply undue force in their deliveries. Therein is a secret for consistency that can only be accomplished through a smooth, free-flowing armswing that permits bowlers to repeat shot after shot without exerting exaggerated force.

It must be noted that Walter Ray Williams is an exception to this rule. Williams, whose forte is the mastery of an end-over-end delivery, applies a thunderous follow through and practically comes out of his shoes. He must, due to the deflection factor of end-over-end deliveries. Walter Ray drives through the ball with unusual force in order to keep the ball from hooking out.

Playing with your ego

This column is geared toward bowlers who are competitively driven but not totally obsessed with posting unrealistic averages on house conditions. Unfortunately, many bowlers averaging 220 to 245 in league play allow their egos to overcome their shortcomings and rather than relinquish their superiority on blocked conditions, they prefer to be a big fish in a small pond.

Alas, sometime, somewhere, they must face the consequences of undoctored lanes. More often than not, they fall flat on their faces. This is never more in evidence than the scores posted by many high average amateurs, as well as numerous so-called pros in the annual US Open. In this year’s US Open, these bowlers, whose averages have hovered between 210 and 235, averaged 179.69. PBA members averaged 190.21 and the truly elite, the exempt PBA players, averaged 204.10, convincingly separating themselves from the field.

Truly talented players utilize various hand positions and speed control to gain the most favorable entry angle. For example, many PBA members have the capacity to play a gutter shot. None is as adept from this angle as David Ozio and Norm Duke. Conversely, the two-handed, no-thumb sensations… Australia’s Jason Belmonte and Finland’s Osku Palermaa..can successfully compete with anyone on a deep, deep inside shot.

Essentially, there are six assorted paths (angles) to the pocket, as discussed in April’s BTM. In order to remain competitive and develop versatility, these various angles require assorted techniques in execution that can only be accomplished by practice and determination.

Versatility is the ability to not only change hand positions, but also requires the right speed, the correct stance, and a long, extended follow through. A power bowler can generate revolutions by virtue of strong finger rotation applied at the release point. Consequently, timing is of the essence.

A release of the thumb prior to the forward release is absolutely essential. The ideal release for the strongest leverage point can be ascertained by drawing an imaginary line from the shoulder point down to the ankle. (See illustration). Any release beyond this zone is counter-productive and lessens the quality of the delivery. This error results in hitting up on the ball, an absolute no-no for proper execution. 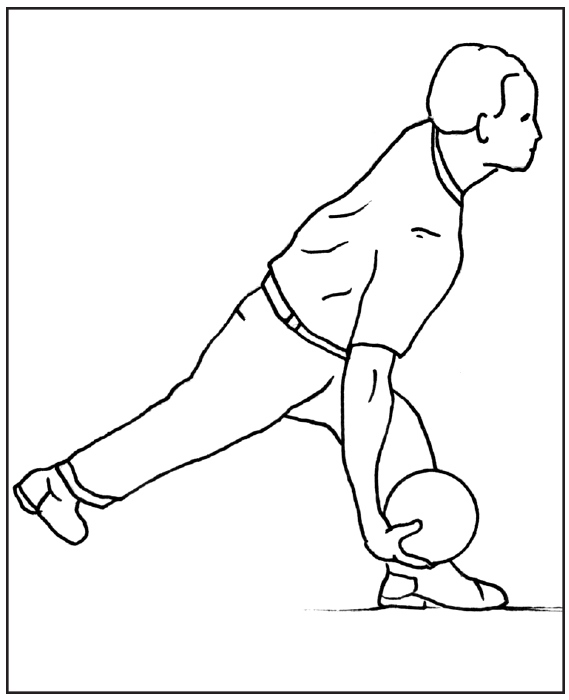 When your shoulder lines up over your sliding ankle, you’ve reached the point of maximum leverage for an ideal release. The weight of the ball rests on the fingers as the ball is projected out onto the lanes.

It is imperative that the ball is laid on the lane and this can only be accomplished by the thumb exiting prior to the release.

This maneuver is the forte of top-rated bowlers of all types…straight shooters, short hookers, big hookers, and the ultra-boomers. For example, among the straight shot players, Michael Haugen’s laydown point is gentle and noiseless. Walter Ray Williams and Norm Duke, the two most proficient end-over-end players, place the ball on the lane so softly and smoothly, that one can hardly hear the ball when it makes contact with the lanes. Ditto for Chris Barnes.

Strokers like Tommy Baker, Parker Bohn, and Brian Voss, epitomize soft laydown releases with little effort while big hookers like Tommy Jones, Pete Weber, and Sean Rash feature open-hand releases with incredible finger rotation in order to generate revolutions. Nonetheless, ALL the aforementioned bowlers have succeeded by virtue of their ability to play different angles when conditions necessitate it. Records indicate that, although these stars have established their identity on their favorite type conditions, they have all succeeded on a variety of oil patterns, a fitting description of versatility.

More important today than ever before

During the era of rubber balls and wooden surfaces, versatility was not as important a requisite as it is today. Most top bowlers at that time took advantage of “tracks” that were created by repeated shots in a certain area. Today’s bowlers move oil all over the lane and force quick-changing conditions.

Stars of the pre-urethane era, like Don Carter, Dick Weber, Ray Bluth, Bill Lillard, Harry Smith, Carmen Salvino, and Billy Welu played against flatter-bottomed uncoated pins with far less explosive balls. However, the secret among these stars is that they ALWAYS chose to bowl on late shifts in the annual ABC tournament so they could take advantage of the drier surfaces. Bowlers on early shifts had to cope with globs of oil that were applied and designed to last the whole day. It was extremely difficult to post big scores on early shifts, giving way to an old phrase at that time…“Give your soul to Jesus because your butt belongs to the ABC.”

Perhaps the practice of lane blocking has diminished the value of versatility; that is, in amateur ranks. Unfortunately, proprietors have been forced to dress lanes for higher fictitious scores in order to placate their bowlers. Even the most honorable and well-intentioned proprietors have fallen victims to egotistic bowlers whose sole desire is in posting big scores and having big averages.

Can anyone blame the proprietors? Absolutely not! Proprietors invest large sums of money in their establishments and must do whatever possible to run a profitable business. As a matter of fact, many bowling centers have relied on various ways to supplement their income – private parties, glow bowling, and vending machines, for example.

Fortunately, a select number of bowlers take pride in their craft. They seek coaches who are competent and willing to impart their wisdom and understanding of quality bowling execution to ambitious students…students who want to improve their games and eventually separate themselves from those who opt for easy conditions.

In the long run, it is far less expensive to hire a good coach than it is to continually purchase the latest bowling balls. I venture to state that any bowler who executes properly with average equipment will outgun any bowler who disregards the importance of proper bowling execution and relies on bowling balls designed to “hook out of the box.”

Although great coaches like Fred Borden and Tom Kouros have practically retired from this profession, bowling has developed many outstanding coaches during the past ten years, including Bill Hall, Bill Spigner, Mark Baker, Del Warren, and a host of others who can be found on the internet. Susie Minshew often conducts bowling seminars that include some of bowling’s top stars. The USBC and the Kegel Company offer bowling instructions featuring cameras and the latest testing equipment.

Furthermore, to provide a more economical way for coaches and bowlers to have access to certification conferences, the USBC has announced it will create Coaching Regional Development Facilities that will offer regional certification conferences, thus cutting down on travel costs for coaches across the country. The Kegel Company of Lake Wales, Florida, and Turbo Tech of Chesterfield, Michigan are the first industry partners to sign on. These facilities will not only certify new coaches but will mentor coaches toward the next level of certification.

In short, there is no shortage of competent coaches throughout the country for those who want to improve their games. If you aspire to be a good bowler, hire a good coach before you squander your wages on new equipment….especially if you want to be versatile!

Image credit: Bowling pins / ball illustration (©iStock.com/3dmentat) is licensed for use by BTM and is the copyrighted property of its original creator.