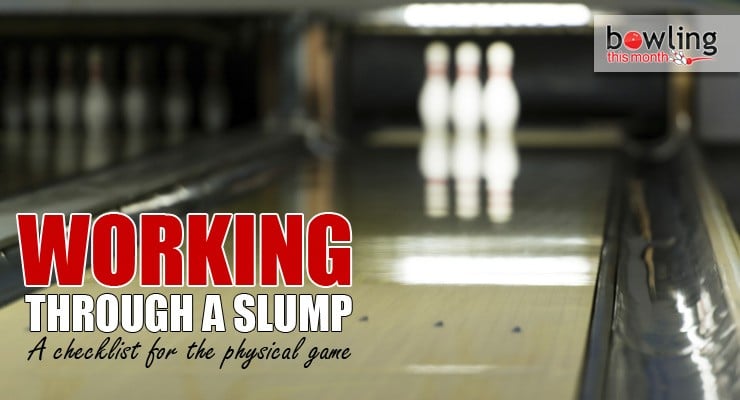 Every bowler at every level goes through a slump now and then. A slump is not just having a bad night at the lanes or a bad tournament, but several bad nights or tournaments. It’s not unusual to hear a bowler say that he or she has been in a slump for several weeks or even months and I have seen many a bowler drop out due to the frustration.

Dr. Dean Hinitz wrote an article in the May 2013 issue of BTM titled Slump Busting: Find your way out starting with an inventory. In that article, Dr. Hinitz wrote, “Waiting for a shift in the bowling weather might work, yet it is an extraordinarily passive approach to changing one’s life. There is no reason to wait for one’s fortunes to change when you can actually control your future.”

I could not agree more. Notice his prescription is not to take two weeks off and quit, but to take a mental and physical inventory, so you can see what’s missing. I will leave the mental inventories to Dr. Hinitz because he is the best of the best at that part of any athlete’s game. I am going to work on an inventory or checklist for the physical side of your game.

Maybe with the help of this checklist, you can shorten your next slump or end the one you are in. Nothing can shorten a slump faster than a good coach, so if you have that resource available to you then, by all means, use it. If you are a tournament bowler, it makes much more sense to pay a coach $100 for the cure than to waste $1,000 or more in entry fees and expenses waiting for something to change.

What slumps are not

Slumps are not an excuse for a lack of skills. As a professional bowling coach, I have had the pleasure of helping lots of bowlers work through slumps. Bowlers whose skill level ranges from the PBA and USBC Halls of Fame down to champion youth bowlers all get in slumps. I can tell when a bowler is in a slump and when a bowler just lacks skills. I have been told many times by bowlers that they have been in a slump for months when I very well know they had never achieved the skill level they proclaim to be slumping from.

I am always willing to help any and all bowlers, but we must be honest with ourselves about the skills we hold. If you are truly in a slump, it means that you are performing at a level well below the level that is standard for you, not below the level you wish you had obtained.

Slumps are the result of one or more things changing that cause you to perform at a substandard level for an extended period of time. Slumps are not bugs you catch like the common cold, but they can infect your game without warning. You can’t feel the slump coming on; there is no runny nose or scratchy throat to notice. The slump just slowly creeps into your game. One day you will suddenly notice that bowling badly is not an occasional thing, it’s becoming the norm and, more often than not, you have no idea why.

There is always a reason for the slump, something has changed. You just didn’t forget how to bowl one day, although sometimes it feels like it. Sometimes it’s not even you that has changed; maybe something in your environment has changed.

In order to work your way through the slump, you have to find what has changed (keep in mind that it could be more than one thing). More often than not one negative change can cause other negative changes to follow. I have created a checklist to help narrow down the possibilities.

Are you hitting your targets?

If you don’t know the answer to this question, you may have solved your problem already; it’s a simple lack of focus. I have never been one to suggest to bowlers they should stare a hole in their target with the idea that they can force themselves to hit it, but you do need to keep your mind in the game.

You not only need focus during the setup and approach, but after the delivery as well. Focusing on the ball as soon as it leaves your hand is the only way to gather information such as the ball path (hitting your targets or not), the type of roll it has, where it reads the lane, etc.

All of this information is vital to you being able to work through a slump, as well as make adjustments to the ever-changing lane conditions. If you find that you are focusing on your front target and your eyes glaze over soon after the ball passes, you will never know if you are hitting your breakpoint target or not. Sometimes to perform better we just need to pay attention for a longer period of time.

I have seen several matches lost on ESPN because a bowler missed inside at the breakpoint (without realizing it), causing the ball to go high. The bowler makes a line adjustment on the next shot because he thought the lane was starting to hook sooner. In this case the line change is premature, so the bowler is usually lost the rest of the game and loses the match by the ninth frame.

How do I know that’s what happened? I know because I usually see the first miss inside at the breakpoint causing the ball to go high. The dead giveaway that my suspicion is correct is when the bowler moves back to the original spot, nails their breakpoint, and strikes out in the ninth and tenth frame…too little, too late.

If the answer to the above question is no, that mostly eliminates environmental changes and focuses the problem directly on your physical game. There must be at least 50 possibilities of things that can go wrong with the physical game that can cause a bowler to start missing targets. Here are some of the most common ones.

Missing breakpoint target (but not the front target):

Are you stable at the foul line?

If you are normally well balanced at the foul line, are you now falling off your shot? Check your slide step. Many times, a bowler will simply stop stepping inward on that last step. You have to step inward so your slide foot ends up in the center of your body in order to be balanced at the line. This is sometimes called filling the hole.

I believe that your slide toe should be pointing at the breakpoint you want to hit or slightly inside of it. If your slide toe is pointing much to the outside of your breakpoint, you will be less stable. If your foot is in this position, it could be an indication you are throwing the ball too hard or your approach is too fast.

If your timing is the culprit, most likely it is too early. That means the ball is getting to the foul line too soon, perhaps before your slide foot.

Is your ball rotating the same way as usual?

I am a strong advocate of always watching your ball rotate as it travels down the lane. If you learn to focus quickly on your ball as soon as it leaves your hand, you can determine the ball’s axis of rotation, axis tilt, and rev rate. If you learn to recognize your ball’s rotational properties, you will know if one or more of those things has changed. If any of the properties of your ball roll change unintentionally, it can drastically change your ball reaction.

The most common causes for your ball roll to change are:

When detrimental ball roll changes only take place during tournaments, it’s usually because bowlers try to put too much “stuff” on the ball. Rookie tournament bowlers always try to give the ball that extra little pop, lift, or hit (you pick your term) with the fingers so the ball can knock down all 14 pins. Let’s add a little extra ball speed and a stronger follow through while we are at it for good measure.

This may come as a shock to you, but there are still only 10 pins in a rack, even in tournaments. If revs don’t come naturally to you and you’re trying to put more stuff on the ball, stop. The odds are you are doing yourself more harm than good. If you are a natural-born rev monster, then you may want to soften up a little for tournaments on sport shots. This will greatly reduce your potential for an under/over ball reaction, the number one killer of tournament scores.

Have you changed your swing?

The shape of our swing can sometimes change without us knowing it. Try these things to see if you can produce a more effective shape:

Make use of video to analyze your game. It seems that everyone has a smartphone now or a tablet of some kind. These can be used to shoot adequate video in most cases. If you don’t have one of these new gadgets, I’ll bet one of your friends does.

Is your footwork consistent?

Keep in mind that your footwork not only has a huge affect on your timing, but the shape of your swing as well.

Are you trying too hard?

When is a slump not a slump?

A slump is not a slump when something changes in your bowling environment that is out of your control. I have seen bowlers think they are in slumps simply because the shot has changed in their league and their scores are suffering. Perhaps the lane man performed a service to the oiling machine or has neglected to do so.

I have also seen bowlers fall into slumps simply because their equipment is getting oil-soaked and their balls have lost all the reaction they once had. The old saying, “You can’t outbowl a bad ball reaction” is certainly true.

I have actually seen bowler’s physical games deteriorate because they are trying to make balls perform. If the bowler doesn’t realize their old ball will not hook anymore, they assume they, rather than the ball, have stopped performing.

If it’s your equipment that’s not performing or something else in your bowling environment is dragging your scores down, you are not in a slump. Trying to rectify the situation by changing your physical game can sure create one, though.

Image credit: Bowling lane background image (©iStock.com/Ibrakovic) is licensed for use by BTM and is the copyrighted property of its original creator.