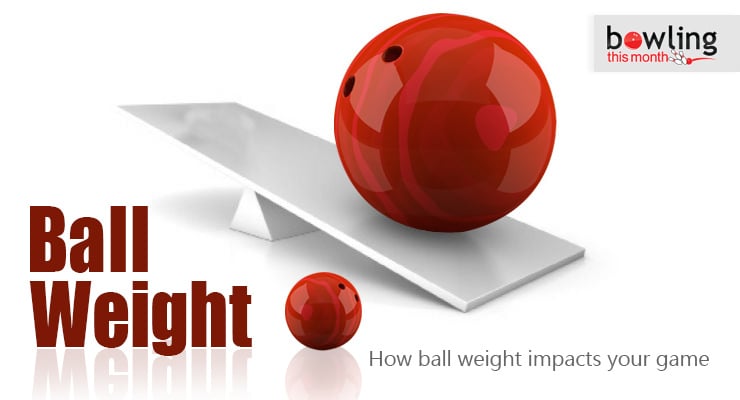 By now the new league season is well underway. After Bowl Expo ended in June, ball manufacturers came out with their new equipment for the 2013-2014 season. Many of these new balls were reviewed in the August and September issues of BTM.

There have been a lot of questions posed to me recently about these balls and specifically about ball weights. These questions came from the parents of junior bowlers up through many of our seniors.

Let’s start with some ball weight basics. Bowling balls are manufactured in weights from 6 pounds to 16 pounds. Most centers have house balls available in all of those weights. House balls are drilled for the masses so it would truly be a miracle if a house ball fit you perfectly.

When a ball is fitted to your hand by the professional ball driller in the pro shop, you will not have to squeeze the ball to hold on to it during the swing, so you should be able to handle the extra pound. The weight of the ball is a very individual thing and there is no “one size fits all” answer.

Recently, I had two lessons which could not have been more diverse. One senior lady rolled an 8 pound ball about 8 miles per hour and wondered why she could not get strikes. The very next lesson was with a 60 year old man rolling a 16 pound ball at 18 miles per hour also complaining about not striking. Ah, the joys of coaching! Things like that really keep you on your toes. We’ll get back to them later.

We are always attempting to use the dynamics of the ball to knock down the most pins. To do this effectively requires that the ball deflection off the pins be kept to a minimum. Less weight hitting the pins means the ball will deflect more. But that is not always the case. In some cases, the way the mass is distributed within that ball (how the driller took into account the core of the ball) can have an effect on its hitting power. That is why it seems some 15 pound balls, and even some 14 pound balls, seem to hit harder than 16 pound balls.

Conversely, you hear some say that nothing hits harder than a 16 pound ball. In a recent PBA tournament, both Chris Barnes and Norm Duke were using 16 pound equipment. Norm was asked by announcer Randy Pederson why he had chosen 16 pound equipment and Norm stated that the weight would work best on that condition to drive out the 5 pin to carry pocket hits. However, when you take into account the current cores, drilling methods, surfaces, and bowler’s abilities to increase revolutions and adjust axis tilt and rotation, the heaviest ball weights may not necessarily be required.

Here is a quote from Tom Kouros’ famous book, Par Bowling: The Challenge: “One should sacrifice some weight whenever accuracy suffers from the effort needed to bowl with a maximum weight ball.” Whenever I train someone, accuracy always comes first followed by action. Many bowlers complain that they can’t hit their mark. Some of that may be ball weight – either too light or too heavy.

What weight for what bowler?

There used to be an old saying that bowlers should use a ball that is 10 percent of their body weight. For anyone over 160 pounds, that method did not work since there are no bowling balls produced over 16 pounds. I personally don’t pay any heed to that old saying.

I find that there are still senior men rolling 16 pound equipment but most are not happy with the results. It’s time to manage the macho image and score better with lighter equipment. The high tech balls available today and the extensive possibilities of drilling can really benefit seniors.

For all bowlers, the more specifics you know about how you roll your equipment the better your driller can prepare the ball for you. That knowledge includes your positive axis point (PAP), axis tilt, axis rotation, and ball speed among other things. It is very important that you share that information as well as where and when you bowl so the driller can recommend the best ball for your circumstances.

Just by looking at the ball review section of this issue, you can see what the inside of a ball looks like. As the ball weight is reduced, the density of core may change, as could the size and shape of the core. Pro shop operators are on top of this and can guide you in the right direction when reducing ball weight.

Remember that Force = Mass x Acceleration. If you can roll a lighter ball with more speed you may still be able to knock down pins with efficiency. Although many of our senior bowlers used to roll 16 pound equipment “back in the day,” those days are gone for the majority. The PBA50 Tour came through The Villages this year with 160 of the greatest senior bowlers in the world. The weight of choice was 15 pounds, with very few rolling 16 pounds and others rolling less than 15 pounds.

If one has undergone a physical impairment which may have included a major operation, coming back to this great sport may take some time and a lot of dedication. The most famous return from injury with which I am familiar is that of Rick Steelsmith.

Steelsmith was a four time All-American at Wichita State and, as an amateur, won the Masters. He had the smoothest of approaches and a classic armswing which appeared effortless. However, he suffered a horrendous right shoulder injury which all but ended his bowling career. It took him years to come back.

He started by rolling 6 and 8 pound equipment. It was great to see his name on the roster for several PBA tournaments in 2012 and 2013. His is a good example for all of us to follow when we are returning from some type of injury.

First and foremost, follow the guidance of your doctor. Then, don’t be in a rush since the lanes are not going anywhere and all of your bowling family is behind you 100 percent. Start with lightweight equipment and work up to a ball weight you can handle that won’t impede a free swing and will still allow you to keep your balance throughout the approach and especially at the finish.

There is the youth bowler who is growing and gaining strength every day and the senior bowler who is losing muscle mass every year and not necessarily able to roll the weight ball to which they have been accustomed. Even though this is the Senior Spotlight, let’s take a short look at what the proper ball weight could be for youth bowlers.

In general, for ages 6-14, use the ball weight for the age of the youth bowler (10 pounds for 10 year olds, etc.) That has worked well for youth programs with which I have been connected. Of course, there are always exceptions based on the physical size and capabilities of each child. One of my outstanding young female bowlers at age eleven rolled a 14 pound ball to register her first 300 game. PeeWees below age 6 would have to use the lowest weight ball which is 6 pounds.

Here is a short story of the two bowlers from the first part of this article. The lady rolling the 8 pound ball who had difficulty striking was always rolling the ball down the middle and the deflection was really negatively impacting her results. I asked her to move right with her feet and modify the release so she could roll at the 1/3 pocket at an angle from between the first and second arrows. She struck a few times and was happy with the changes.

The man rolling the 16 pound ball at 18 mph required a change in his release to get better rotation on the ball. He did that and his ball speed was lowered automatically to between 16 and 17 mph and he started striking. That demonstrates to me that neither ball weight nor ball speed is everything. This is a game of angles, primarily how your pocket is hit and how your ball drives out the 5 pin. I recommend using a ball weight which allows you to perform without excessive stress while being able to repeat shots and drive out the 5 pin.

If you are increasing your ball weight and rolling in longer tournaments make sure you develop the stamina required to perform well over more games with more weight. Many of us have seen bowlers drop from 16 pounds to a lighter ball weight and increase their average. This can be a result of the reduced weight having less negative impact on the armswing and total approach and the finishing balance. Changing ball weight, either up or down, may help your game but the key is to maintain good timing, armswing, and release while remaining pain free. I feel that the three keys to good bowling are still timing, armswing, and release (thank you to the late John Jowdy).

Your safety is always primary. Use a ball you can control without muscle and which causes you the least amount of stress. If you are going to roll in several leagues and weekend tournaments, you may want to consider reducing your ball weight. Work with your pro shop professional to select a ball with a core and surface which matches your game with when and where you bowl. Good luck!

Image credit: Bowling ball graphic (©iStock.com/Maestria_diz) is licensed for use by BTM and is the copyrighted property of its original creator.